Mirror, mirror, on the wall…. We actually have no rhyme here, but are simply wondering WTF just happened on The Flash?

The CW series’ midseason opener found Barry traveling to Lian Yu with Arrow‘s John Diggle to investigate what was thought to maybe be a new Mirakuru threat, but instead was simply a message for Barry to slow down (so to speak) and enjoy life.

Iris, meanwhile, was enjoying the Citizen‘s investigation into the theft of a photon rifle that weaponizes meta powers. In doing so, she locked horns with McCulloch Technologies CEO Joseph Carver, who tried to claim that Iris’ source was full of bunk. When Iris forged ahead with her story on McCulloch’s security breach, said source got whacked by a meta assassin, Kimiyo Hoshi, working for the mysterious Black Hole organization, while Iris herself got nicked during her getaway.

As Hoshi was later caught targeting a hologram Iris, the real one confronted Carver at his workplace, detailing the elaborate conspiracy at hand, concluding, “You weren’t robbed by Black Hole. You are Black Hole.” Iris then warned she has set up a “dead man’s switch,” where if she or any loved ones/staffers are harmed by Black Hole, all of her intel on Carver and McCulloch will be released — as such, he orders Hoshi to stand down, just as she is about to ice Frost with a head shot.

In an episode-ending bonus scene, Iris — triggered by the sight of a mirror, and her source uttering that word as he died —  slipped off to McCulloch in the middle of the night, to the office labeled AV3 — or EVA, backwards, as in Carver’s late wife. Inside there, she uncovered a large mirror, from which two arms protruded, pulling Iris into its glassy void!

What has Iris gotten herself into?

“I challenged everybody [on the writing staff] to tell the craziest Flash story ever, in all six seasons, and boy have they brought it,” raves showrunner Eric Wallace. “We’re not in a horror movie anymore,” as with Season 6A’s Bloodwork arc, he notes. “We’re now going to enter what I would call sci-fi territory.”

Specifically, The Flash is doing a new take on Mirror Master, who in one DC Comics incarnation is named Evan McCulloch. (Previously, the CW series in Season 3 introduced the Sam Scudder version of Mirror Master, while a Season 5 episode referenced the Evan of Earth-Two.)

Wallace says that viewers will “immediately” get answers about Iris’ fate, due to the fast-moving nature of Season 6’s “Graphic Novel” (half-season arcs) format. “In shortening the seasons and having Big Bads that are exclusive to fewer episodes, the stories burn hotter and faster, which means we can go further and do crazier things, and accomplish narrative goals and emotional goals that we weren’t able to do in the past,” he explains. “It’s been the greatest blessing ever.”

As for the who inside that mirror, might it actually be a friendly, and not as presumed a foe? “I would say yes. I would say yes…,” the EP allows. “But not in the way that you think.” (Israeli actress Efrat Dor, of Mayans M.C. and Sneaky Pete, was cast as Eva McCulloch back in November.) 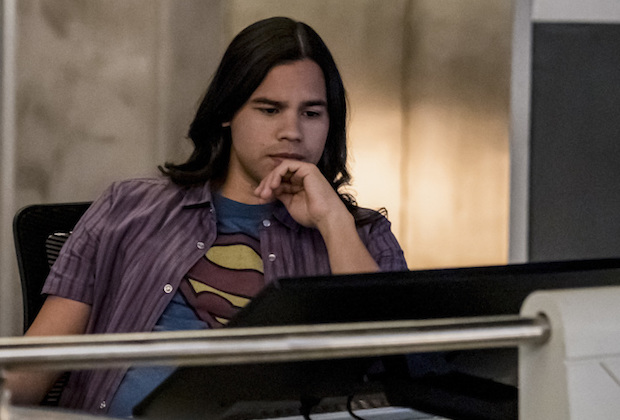 The Flash‘s post-Crisis return also saw Cisco set out on a globe-trotting journey to catalog all of the new changes and threats created in the reborn universe, while inviting Nash Wells to hold down the fort in his absence. But despite that seeming passing of the torch — and with tech-savvy newcomer Chester P. Runk still waiting in the wings — Wallace says that was not original cast member Carlos Valdes bidding the show adieu.

“Oh, no. No. [Cisco and Carlos] are not going anywhere,” he maintains. “Cisco’s off on his journey to catalog the world, but he’ll be back very quickly. And the information he learns out there in the world is going to help us solve one of the biggest things Team Flash has ever dealt with, and that involves the return of an old villain, which I won’t spoil.”