Carrie Mathison’s last mission is about to begin: Homeland kicks off its eighth and final season this week… but the choice to end the Showtime spy thriller was actually made years ago.

“The decision to end it after the eighth season happened after the fifth season,” back when Showtime renewed it for multiple seasons, executive producer Alex Gansa tells TVLine. There was “a huge financial incentive to keep the show going,” he adds. “The show was incredibly profitable for everybody. But we also didn’t want it to outstay its welcome.” The ultimate decision to end with Season 8 “involved conversations with everybody,” including series stars Claire Danes (Carrie) and Mandy Patinkin (Saul). It helped that Seasons 6 and 7 were shot in the United States, following several seasons in South Africa and Berlin, “because the toll that going overseas takes on everybody was huge.”

But then lengthy delays in filming Season 8 — Homeland will have been off the air for nearly two full years when it returns on Sunday at 9/8c — “made it seem like Season 7 would’ve been a good time to end it,” EP Howard Gordon says with a weary laugh. Danes’ pregnancy delayed production for a while, Gansa notes, “and then shooting in Morocco took way longer than we thought, and we weren’t able to accomplish all that we wanted to in Morocco, so we had to come back to the United States, and that required setting up another production team here, and that delayed us some more months. It’s literally the season that will never end.”

Season 8 is finally here, though, and it actually ties back to Homeland‘s very first season: Back then, Carrie was convinced Brody was a secret spy, and now some are convinced that she’s one. “There is a symmetry to this season,” Gordon teases, “in that it bookends the essential premise of the first season, which was Brody’s patriotism, and is he a traitor? And this year, it’s Carrie who, after her long captivity and the deprivation of her meds, winds up coming back, and people think she certainly isn’t who she was, and may even have allegiances based on her time in Russia.” And no, the connection to her former love “isn’t lost on her,” he adds. 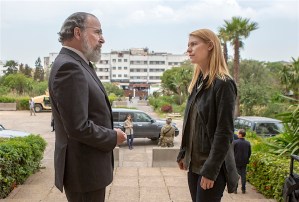 But the key relationship in Season 8 — and the entire series, really — is between Carrie and Saul, Gansa emphasizes. “Homeland was really created as a meditation upon the Saul and Carrie relationship. That is, the mentor and the protégé… That’s really the centerpiece of Season 8.” Now the President’s national security advisor, Saul recruits Carrie to help hammer out a peace treaty with the Taliban in Afghanistan, but it’s not completely smooth sailing between the two old friends. “There’s a lot of tension between them,” Gansa admits. “There’s a lot of trust, there’s a lot of loyalty, but there’s also a lot of conflict… And that story resolves. The Carrie/Saul story really does resolve in the last season.”

And this is indeed the last season, Gansa firmly declares: “I certainly view it as closing the book, and really resolving this protégé-mentor relationship, and saying something definitive about America’s counterterrorism activities over the last twenty years, since 9/11. So the story, for me, ends there.” Gordon isn’t so certain, though, and thinks Gansa may “change his mind at some point. We’re all story junkies,” and if the right story came along, he won’t rule out more adventures for Carrie.

One thing they definitely won’t do: try to reboot the Homeland franchise without Danes as Carrie, a la 24: Legacy, with Corey Hawkins stepping in for Kiefer Sutherland. “I think Carrie is Homeland,” Gordon says. “It’s not the Enterprise.”

Alright, Homeland fans, it’s your turn: What do you want to see in the final season?