The fact that USA Network’s new murder-mystery Briarpatch is set in a steamy Texas border town known as Saint Disgrace is a big clue about what’s to follow. It’s a conspicuously quirky setting for a conspicuously quirky show: a funky neo-noir full of eccentric characters that has atmosphere to burn. There’s plenty to like about the style of Briarpatch — premiering Thursday, Feb. 6 at 10/9c; I’ve seen the first three episodes — but I’m not sure there’s enough substance to go with it. It is undeniably clever… but it might be too clever for its own good.

Rosario Dawson stars as Allegra Dill, a glamorous government fixer in the Olivia Pope mold who comes back to her hometown — yep, that’d be Saint Disgrace — to solve her sister Felicity’s recent murder. (A local cop with a bright future, Felicity was killed in a shocking car bombing.) Allegra starts to pull at loose threads and ends up trapped in a dense web of lies, money and colorful weirdos. Who would want to kill Felicity? And why did she take out such a huge life insurance policy on herself?

The result is a little bit Fargo, a little bit Breaking Bad and very Tarantino-esque, packed with dark humor, goofy character names and casual violence. (“It appears someone just blew up the landlady,” a resident at Felicity’s apartment building deadpans.) Saint Disgrace is home to a truly motley crew of townsfolk, and is known as an “established hive of criminal what-the-f—kery,” according to Kim Dickens’ folksy police chief. A recent zoo escape adds a touch of the surreal to the proceedings, with giraffes and zebras roaming around town like stray dogs. 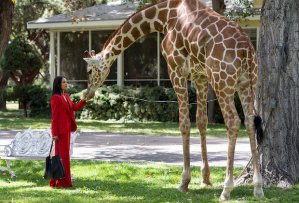 It’s all a bit fanciful, though, like it was conjured up in a screenwriter’s head rather than authentically lived. (Former TV critic Andy Greenwald serves as writer here, with Mr. Robot mastermind Sam Esmail onboard as an executive producer.) Briarpatch is a modern film noir where everybody talks tough, all speaking in the same flowery, hard-boiled manner. (There’s a hint of meta self-awareness here, too, with the characters openly referencing crime dramas of the past.) But the central mystery isn’t as interesting as the atmosphere surrounding it; we don’t learn enough about Felicity to mourn her loss along with Allegra. We meet suspect after suspect in a dizzying blur… and that’s all before Alan Cumming shows up as a sinister Bond villain of sorts. The more complicated Briarpatch‘s mystery became, the less invested I was in how it’ll all turn out.

Dawson has a few fleeting moments where she lets us glimpse the simmering emotions underneath Allegra’s tough exterior, but Allegra is mostly impenetrable as a lead character. (She’s another cynical, hard-drinking, sexually adventurous female detective in the vein of Stumptown‘s Dex Parios.) Mad Men alum Jay R. Ferguson has a lot of fun as filthy rich gun runner Jake Spivey; a scene of him snorting coke and strutting around to the Units’ synth-rock thumper “High Pressure Days” hints at the kind of inspired lunacy that Briarpatch might be capable of.

The whole thing has decent energy, and boasts enough interesting visual flourishes that it’s tempting to let it slide by purely on style points. (It’s certainly more appealing than yet another assembly-line procedural or medical drama.) But it’s hard to locate the humanity buried underneath all this style. Like fellow oddballs Claws and On Becoming a God in Central Florida, Briarpatch tries to get by solely on quirk at times — but, sadly, man cannot live on quirk alone.

THE TVLINE BOTTOM LINE: USA’s Briarpatch is a fun and quirky murder-mystery, but its abundance of style ends up outweighing its substance.