In the season finale of Netflix’s Ragnarok, small-town secrets wait to be exposed, while dormant powers finally break the surface. As Magne comes to terms with who he is, Gry gets closer to the truth about Fjor’s family. The whole shebang culminates with lightning and glowing eyes and lots of punching, but let’s take it from the top, shall we?

Magne brings the authorities to the tunnel where he discovered the chemical waste barrels, but the villainous Vidar is there waiting for them. Magne informs the authorities that Isolde’s water sample came from this spot and that it contained lead, cadmium and mercury, the chemicals leaking into everyone’s drinking water. Vidar opens the steel door and of course, the entire cave is empty… because 3,000-year-old giants are super strong and quite efficient! “You will regret this, understand?” Vidar tells Magne. What a bully.

Headmaster Ran informs students that Magne has been kicked out of school following an order for a psychiatric evaluation, and teachers, including Erik, signed a statement asking for his removal. Gry isn’t happy. She gets up and walks out of class because she is the ride-or-die everyone deserves. She finds Magne in the hallway and gives him a powerful hug we can practically feel through our TV screens.

Vidar’s back to beating up his son because he thinks Gry stole a picture from their family album. Having her close is a tremendous risk that might lead to their demise, he says.

Turid is also having kid problems. For what it’s worth, she’s pretty chill considering her son is trying to uncover a shady conspiracy. Regardless, Magne doesn’t want to see the shrink and Laurits attacks her for never taking responsibility… and not buying milk, too. “Maybe you should concentrate on being a good mother,” he fires. Ouch!

At the market, the crazy-eyed woman tells Turid, “Don’t let yourselves be devoured by darkness. The light is on its way.” Turid loses her patience and calls the woman out for spewing nonsense, and honestly, it’s about time! Say something useful already, omen-lady-who-clearly-knows-something! 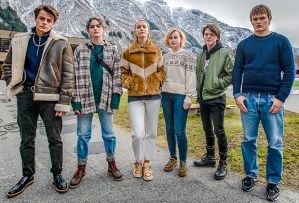 Gry presents her rewritten paper, excluding the town’s scandalous gossip. The teachers are impressed, but after, Gry flunks herself by telling them it was all BS. “We have pollution, ice melting, people lying sick at home, but nobody talks about that.” She tells her friends that “Isolde was right, and we all know it,” but Saxa rudely tells her she’s not Greta Thunberg. (Does anyone else get Yvonne Strahovski-vibes from Theresa Frostad Eggesbø?)

Fjor overhears his dad on the phone talking about the steel barrels. Will Fjor come through for the Good Guys in a clutch moment or inevitably follow in his family’s footsteps?

At his psychiatric exam, the doctor says Magne fulfills the criteria for a paranoid schizophrenic. She wants to put him on medication immediately, which should calm him down. Fjor finds Magne and Turid and admits that Magne was right. The barrels did exist, and they’re being shipped off that night. (Turid was out of earshot, though, which is just… sigh.)

When Fjor arrives home, his family confronts him about the stolen photo and orders him to kill Gry to show his loyalty. Meanwhile, Magne races off to find the barrels and sees them being loaded onto a freighter. Since his smartphone was confiscated, he can’t take any damning pictorial evidence.

At the Constitutional Day assembly, Saxa threatens Fjor that if he doesn’t kill Gry, she will. As the ceremony begins, Vidar looks at his phone and ducks out. He heads to the police station where five barrels sit on the stoop, perfectly matching Magne’s description. The police say they’re going to launch an investigation and they expect his full cooperation. Who needs an iPhone when you have god-like super-strength?

Magne sees Fjor grab Gry by the hand and sneak away. Fjor brings her to an abandoned warehouse and flashes his yellowy giant-eyes. Just as he descends upon Gry, Magne shows up and hurls a mallet at his head. When Magne steps forward to deal the finishing blow, Gry stops him. (Girl, he was gonna kill you!)

Suddenly, a booming “THOR!” rings out. Vidar is here and he’s ready for battle. Magne and Vidar engage in a bout of fisticuffs, before Vidar sends our protagonist through several layers of drywall and stone. “I was wrong. You’re not the god Thor. You are not the old archenemy of the giants. You are just a boy.” Vidar then mentions Isolde’s name, which sends Magne into a blinding rage. He raises his arms to the skies and lightning pulsates through his body, sending both fighters flying. Panning out, we see the old woman from the market smoking a cigarette, enjoying the show and once again contributing nothing! (What gives, lady!?)

As Magne’s hand forms into a fist, a flash of light sparks off-screen and a bird soars through the skies. In a voiceover, the woman-turned-hawk says, “Many believe Ragnarok was the end. They are wrong. It is where it all starts.”

What burning Ragnarok questions do you have? Are you hoping for a second season? Grade the finale, then drop your thoughts below!