Locke & Key, the comic book series written by Joe Hill and illustrated by Gabriel Rodríguez for IDW, has been eyed for one live-action adaptation or another (…or another) for nearly a decade. In the end, Netflix is the one to bring it to life. Was it worth the wait?

First developed for television by Fox back in 2010, Locke & Key sustained multiple starts-and-stops since then, including at Hulu and once envisioned as a feature film trilogy. But on Friday, Feb. 7, it arrives in the form of a 10-episode series developed by Carlton Cuse (Lost, Bates Motel), Meredith Averill (The Haunting of Hill House) and Aron Eli Coleite (Heroes). Averill’s credit is perhaps most apparent in the end result, as the Netflix series marries the moody, gothic setting of Netflix’s Hill House with the youth-skewed adventure tone of Stranger Things. 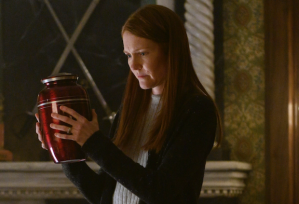 Locke & Key stars Darby Stanchfield (Scandal) as Nina Locke, a recovering alcoholic who in the wake of husband Rendell’s tragic murder moves herself and her three kids — Tyler (American Crime standout Connor Jessup), Kinsey (Utopia‘s Emilia Jones) and Bode (It‘s Jackson Robert Scott, the lone carryover from the scrapped Hulu adaptation) — across the country from Seattle to the Locke family’s ancestral home, Key House, in Matherson, Massachusetts. As teens Tyler and Kinsey struggle with the new school/social scene, Bode makes a series of discoveries around the Key House property, including but not limited to a mysterious presence inside a wellhouse and a series of keys that possess uniquely magical properties. (For example, the Anywhere Key can transport you through any door you can visualize, while the Head Key — once inserted into a lock that ickily materializes at the nape of the neck — allows a person to literally step inside an elaborately constructed metaphor for their mind.)

As Bode, and Tyler and Kinsey soon after, become familiar with their very special new home, their reactions are more in the vein of “Whoa, cool!” than the far more apt “Seriously, what the holy [bleep] is going on here?!,” which you simply need to accept as the story marches forward. Nina and the kids’ Uncle Duncan (Killjoys‘ Aaron Ashmore), meanwhile, are oblivious to the goings-on, in keeping with rules set by the comic books (after age 18, you’re blind to magic). That wrinkle sadly stymies Stanchfield’s storyline in particular, leaving Nina to instead delve into the mystery of husband Rendell’s peculiar past and how a seemingly kindly neighbor (The Fosters‘ Sherri Saum) fits into it.

Outside of the supernatural aspects, the teen fare is at times rote, giving Jessup nothing close to the material he worked with on American Crime; instead, his very best scenes are opposite Jones’ Kinsey, as brother and sister navigate a difficult, interestingly evolving dynamic. Jones is at first saddled by the Sad Loner role, until Kinsey undergoes a most welcome transformation of sorts; that’s when the young actress really lightens up and shines. Scott does a good bit of the heavy lifting as Bode, yet is… perhaps overqualified? (The youngest Locke rolls with the unbelievable punches a bit too easily.) 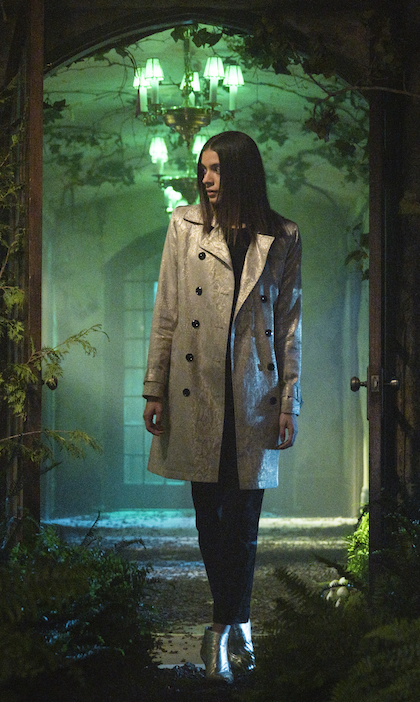 A true standout among the proceedings is Laysla De Oliveira (I’ll go with… The Gifted?) as Dodge, one face of what the Lockes find themselves up against. The Brazilian actress manages to, as needed, come off as an all-knowing, aggressive, ancient evil… or as a flirty kegger crasher. (She also enunciates Bode’s name in a bone-chilling manner, brrrr.) English actor Petrice Jones (Step Up: High Water) is also quite charming in an unassuming/slightly nerdy way, as a love interest for Kinsey.

The set design, as with the aforementioned The Haunting of Hill House, is gorgeous and moody and ornate, making Key House very much a character unto itself. And the special effects demanded by many of the found keys are slick and top-notch, especially when we go inside Kinsey’s mind or when the kids unearth a certain someone’s memories. (Those two aspects elevated the grade here from being a more average “C+.”)

Locke & Key isn’t at all shy about revealing Key House’s incredible secrets; it just struggles to then do much with them, instead tending to hit pause on any acquired momentum to dive back into high school dating/movie club drama. As such, things don’t really get crackling until Episode 5 or so, building to a season finale that thrillingly thrusts the kids into hero mode but, most of all, sets the stage for any possible Season 2.

I will be most curious to see how lovers of the comic books (with which I am unacquainted) regard this lonnnnnng-awaited adaptation — which seems pretty faithful, save for a tweak here and there — and its potential for the future.

THE TVLINE BOTTOM LINE: Boasting a fine cast, Locke & Key is quick to unlock its whiz-bang magical secrets (and in turn wields very nifty special effects), yet struggles to maintain the momentum so fun and vivid a story deserves.