In Netflix’s latest foreign fare, the coming-of-age drama Ragnarok, the Old World is very much alive. Set against the beautiful backdrop of rural Norway, the series circles around Norse mythology, which, as a title card tells us, “begins with natural disasters and culminates in the great battle between the gods and the giants.” Party.

In the first of six episodes (which released Friday, Jan. 31), we enter as a mom and her two teenage sons relocate to Edda, Norway. Magne (played by Skam‘s David Stakston) is the peculiar, quieter older son, while Laurits (Wisting‘s Jonas Strand Gravli) is the outgoing, slightly younger buck. As the family drives, the mom, Turid (Lilyhammer‘s Henriette Steenstrup), slows the car down because a man’s in the middle of the road. Magne gets out of the car to veer the old man to safety, who ominously asks, “Do you know what a strange town this is?” (A simple thank you would have sufficed.) The man’s wife waves her hand over Magne’s forehead. His eyes fill with electricity and we hear freaky voices. He gets back in the car and tells his family it’s going to rain, even though there’s not a cloud in the sky. 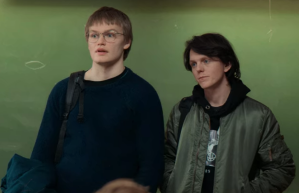 While in class, we learn Magne is dyslexic and that Edda was the last town in Norway to become Christian and give up faith in the Norse gods. The teacher writes “Ragnarok” on the board and it’s the perfect time for an info-dump! Ragnarok signifies the final clash between the gods and giants. The gods represented law, the giants chaos. The balance of the world depended on the struggle between them. While the gods were betrayed and died, the giants simply disappeared.

In between classes we meet Fjor (Skam‘s Herman Tømmeraas), the class jock/jerk and his sister, Saxa (Skam’s Theresa Frostad Eggesbø), an attractive mean girl. Their mother, Ran, is the principal of the school. Small town politics, coming soon to a recap near you!

At home, the brothers find old tools with an “S” rune on them. Magne says it’s their grandfather’s old monogram. Later, when Turid is using a mallet, Magne touches it and feels a connection. It seems he’s about to discover his true calling.

Magne makes a new friend in Isolde, a young girl with a broken bike. Good thing Magne is godly now; he fixes her bent tire with his own bare hands — and even he seems surprised by the feat. (That was quite a speculative leap. We have no idea if he’s a god yet, but let’s be real, it’s a distinct possibility.)

During a meeting with the principal, Turid says her oldest isn’t academically inclined and has concentration problems. Their dad died when Magne was six. He has a rash temper, says mom, and he can be a bit violent when he’s treated unfairly. Magne is barely paying attention, but suggests they should close the window after he hears gulls cawing in the distance. Seconds later, the window slams shut so hard it cracks.

Out on the town, Turid sees Vidar, Ran’s husband, and the two chat like old friends. He seems warm and genuine, but at home he’s cold and monstrous with his kids. He looks up Turid’s dead husband, and I think we can safely file this one under “Villain Alert.” Red font, all caps. 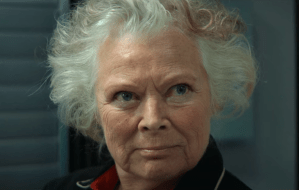 The old woman with the crazy eyes from the beginning tells Magne to “beware the spring equinox. It’s dangerous on the mountain.” This premiere is certainly stacked with omens, huh? This lady will surely add pieces to this puzzle down the line, but what exactly does she know?

Magne has dinner over at Isolde’s house. His new friend is convinced her mom died because of shady environmental changes, which is also (maybe) killing the factory town’s fish. It doesn’t take much savvy to sense a small-town conspiracy plot brewing.

On a hike, Isolde tells Magne that the town is so small it makes people crazy. They come to a warning sign near a bridge and hop right over it, but a voicemail that something is wrong with his mom sends Magne running back home.

Elsewhere on the mountain, Vidar strips naked and stalks a group of deer. We hear a man speaking in Old Norse as Vidar’s eyes glow yellow. He pounces on a deer, snaps its neck and rips its heart out. Just to reiterate: he is very, very naked. When you think it can’t get any weirder, he bites into the animal’s heart and roars. Suddenly, Ragnarok feels like a Norwegian remake of True Blood.

Isolde, having heard the roar of the naked man, enters a cave and sees a sign: “Property of Jutul Industries.” Magne rushes home, but it was just his brother playing games. He goes outside to see Isolde paragliding off the mountain… and straight into electrical wires. She slams into the ground and by the time he catches up to her, she’s dead. Magne tosses the mallet from before toward the skies and it flies. Super high, super far, never to be seen again. Our boy is now Thor (he’s not). Thor screams as lightning pulsates, enveloping the mallet as it hurtles through the air.

What did you think of the Ragnarok premiere? Grade it below, then drop some comments!