When we last left Hollywoo, two journalists inched closer to uncovering the truth behind Sarah Lynn’s death, while half-sister Hollyhock was about to learn what BoJack almost did with a teenage girl in New Mexico. With BoJack Horseman‘s last eight episodes now on Netflix, it’s not really a question of if the skeletons in his closet will be exposed, but more like when.

The midseason premiere opens at Wesleyan University as the now-Professor Horseman preps for his new gig as a collegiate educator. After a bumpy start where BoJack, the actor, struggles to define his own profession, he gives the students some out-of-the-box advice to enhance their performances. But like with everything else in BoJack’s life, he’s flying blind, a horse without direction.

After implying to a student named Whitfield that acting might not work out for him, the kid shows up to BoJack’s Alcoholics Anonymous meeting playing the role of a drunk. Honestly, BoJack’s instincts were right: This kid kind of sucks.

BoJack goes to see Hollyhock’s rugby match and asks if he can tag along to the post-game hangout… but it’s at a bar. “I don’t think you should. There will be alcohol there. And young girls,” she says. Based on the awkwardness of this stop-and-chat, it seems she knows about BoJack’s fling with Penny, his friend’s 17-year-old daughter.

BoJack is undeterred; he continues attending her games despite his half-sister’s cold shoulder. He’s desperate to strengthen the connection, but is also coming on far too strong. Hollyhock quits the team; she wants to focus on her studies and tells BoJack to focus on his teaching. (Take the hint, man!) It seems the one remaining chance he had at a real familial relationship lies in jeopardy thanks, once again, to his many past mistakes.

BoJack criticizes another student for his portrayal of old characters, and whattya know, that student also shows up to his AA meeting ready to prove him wrong. The fact that they think AA meetings are an appropriate place to “stick it to teach” is completely inappropriate, but also kind of hilarious.

Another student, Aimee, comes to BoJack’s office. He talks to her about missing classes and seeming tired all the time, and surely enough, she shows up to an AA meeting. BoJack snaps and kicks her out calling her a “desperate acting student pretending to have problems.” Turns out she was actually trying to get help. Oops! BoJack can’t win. 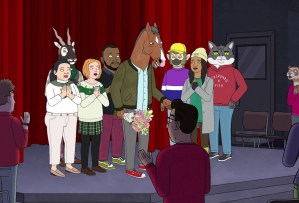 It comes time for BoJack’s students’ acting showcase, but Hollyhock is nowhere to be seen, even though she promised she’d attend. He knocks on her dorm door and lets her know his disappointment. She feels smothered. “This was my life, my world, and you just, like, live here now,” she tells him. He admits it was selfish of him to get a job at her school without asking her first. He says he could get a job somewhere else if it’s too weird for her. BoJack asks if they’re in a fight; she says yes, but also tells him it “could be cool” if he comes back in the fall… but they need to take things slow. BoJack walks away, dejected.

As the showcase ends, BoJack’s cell phone rings. It’s Charlotte, Penny’s mother. Reporters are flocking, and they want Penny to tell her story about her night out with the celebrity horse. BoJack has no idea why reporters are sniffing around; he’s so shaken, he can barely catch his breath.

This can’t possibly end well for BoJack, right? Grade the premiere, then tell us your thoughts below!