Warning: The following contains spoilers for Thursday’s Station 19. If you’d rather watch first, read later, drop your laptop like it was on fire. Well, maybe not literally!

Not a single Grey’s Anatomy character was featured in Thursday’s Station 19 — and that was actually OK. “Indoor Fireworks” burned brightly on its own merits, introducing a new fire chief who’s as obnoxious as Koracick at his worst, using Ben’s history to alter the course of his future, setting up Jack for what promises to be one ugly showdown, and returning Ryan to Seattle just in time for tragedy to strike. Read on, and as the smoke clears, we’ll go over the deets. 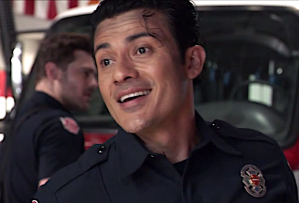 ‘I’D LOVE AN EXCUSE TO KNOCK THE BOY BAND OFF YOUR FACE’ | Early on in the episode, Rico Vasquez, who usually works the station’s B shift, seized every opportunity that came his way to make sure that, while riding with the A team (as Andy’s stand-in), they knew he was a total d-bag. In particular, he had a gift for making steam come out of Jack’s ears. Shortly, the gang was distracted by the broadcast of a press conference during which former cop Michael Dixon was named the new fire chief. No sooner had Dean cracked that the guy looked like a sex offender than oops… there he was, in the room with Sullivan. Quicker than you could say, “Does anyone wanna suck up?” Maya was making like a Hoover on steroids, introducing herself as an Olympian. To her delight, Dixon already knew who she was and was displeased that she hadn’t been used more for PR purposes. Yeah, like Grey’s Koracick, Dixon was very into optics — to the point that he privately admitted to Sullivan, “I’m not saying City Council was happy when [press-shy Ripley] died, but… ” Eesh, right? Anyway, as Dixon’s tour wrapped up, he hinted that Sullivan was at the top of his list of candidates for battalion chief, provided there weren’t any skeletons in his closet. “Who, me? In love with Andy? Uh-uh, no, sir,” his face said. But a simple nope was all his lips said. 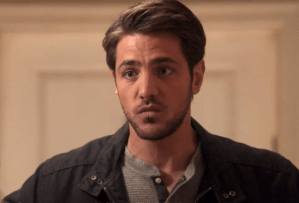 ‘I CAN’T HEAR YOU; THERE’S TOO MUCH BLOOD’ | Meanwhile, Ryan showed up on Andy’s doorstep insisting that he wasn’t back in Seattle because of her. “Not everything’s about you,” he lied. The former lovers had scarcely said hello when they heard a scream coming from an apartment down the hall. Turned out, a neighbor named Ruby had broken a wine glass in such a way that she was bleeding like crazy while her two kids bawled. Since the single mom was “I’m out of paper towels” broke, Andy had Ryan call her dad to give Ruby an ambulance ride off the books. And since the youngsters’ father wasn’t allowed within 100 yards of them, Andy and Ryan volunteered to stay with them while Pruitt and his partner took Ruby to the hospital. When he wasn’t playing piu-piu shoot-’em-up with older kid Milo, Ryan got Andy to reveal why she wasn’t working and why she and her dad weren’t speaking. Later, she got Ryan to admit that he’d left San Diego because Jenna had cheated on him — and told him in hopes of hurting him. Why? Because a day earlier, she’d asked if he was still in love with his ex, and he’d said yes. “I guess it turns out everything is about you, Andy,” he said… just as Milo reentered the room, his finger pistol replaced by his mom’s very real gun. “Don’tdon’tdon’t” hardly had a chance to be uttered before the kid had fired, scaring himself to death and putting a bullet in Ryan. Frantic, Andy phoned her dad to come back stat. (And the tone in Jaina Lee Ortiz’s voice there… that was some credible terror!) 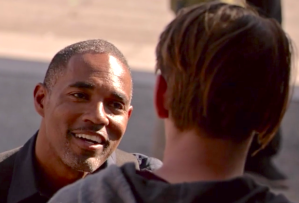 ‘WHO KNEW POTATO CHIPS WERE SO FLAMMABLE, HUH?’ | Responding to a call from a five-and-dime, Station 19’s firefighters treated shoppers injured when fireworks began exploding all around them — a prank pulled by teenagers Chris and Tyler, who reminded Ben of himself. In a series of flashbacks, we learned that, as an adolescent, he and some pals had gone on a joyride that had left one of them — Danny — on life support. In the present, Ben was still arguably too much of a risk-taker, as he reentered the store to find a missing Chris despite the fact that he wasn’t wearing proper protective gear. (On the plus side, Ben was right — he did “get” the kids and was able to locate Chris.) Before the crew wrapped up their work at the five-and-dime, Travis had given a boy who was too terrified to move the mother of all pep talks about why he couldn’t let the scary stuff he heard on the evening news frighten him out of living, and Pruitt rolled by to issue a warning to Sullivan. The new chief, Pruitt said, would surely take his call; they went back a ways. So whatever is or was going on between the captain and Andy… “it ends now.” Off that escapade, the gang — except for Sullivan and Maya, who were gym-bound — headed out for a beer at whatever the firefighters’ equivalent of Joe’s is.

‘I LOVE GOSSIP MORE THAN I SHOULD’ | As the hour drew to a close, Jack, Vic, Dean and Travis watched Dixon on the bar TV turning their heroism into publicity. When a pretty woman came in, she remarked that the chief looked like a sex offender. That was all the opening Jack needed — next thing we knew, they were doing it in a car… just as her husband showed up looking for her. Of course it was Vasquez! Even worse, Jack knew she was married — they’d met at a barbecue a year earlier — he’d just forgotten! D’oh! Back at the station, Maya came right out and told Sullivan that she wanted a promotion at the same time that he got his. And if they gave gold medals for confidence, she’d have a trophy-case full. “I am the next captain of Station 19,” she declared before benching what looked to weigh as much as a fire truck. Elsewhere, Ben paid a visit to Danny, who was still on life support, and shared that all of his careers and, in fact, “everything I do in my life, it all comes back to you. I’m trying to save you.” Which gave Ben a great idea that he subsequently shared with Sullivan: Warren wanted to start a physician response team — basically, a surgeon first-responder like in the military. When Sullivan made skeptical noises, Ben asked, “You wanna impress Dixon? I’m your shot.” That changed the expression on the captain’s face considerably.

So, what did you think of “Indoor Fireworks”? Do you believe the show will really kill off Ryan? How freaking awesome was Travis’ speech to that poor, scared kid? Hit the comments.