Even if you already know the story of the rigged McDonald’s Monopoly game (which was covered extensively by The Daily Beast in 2018), HBO’s McMillions documentary series is a fun, informative and highly entertaining look into one strange scam.

The basic details are this: From 1989 to 2001, ex-cop Jerome “Jerry” Jacobson rigged the McDonald’s Monopoly game by basically handing over winning pieces to everyone from mobsters to single mothers in exchange for some of the prize money. Meaning, for about 12 years, nearly all of the game’s big-ticket winners were frauds. In 2000, a tip led the FBI to begin investigating (complete with a pretty elaborate undercover operation) as the story became increasingly convoluted — and simultaneously zany and devastating.

HBO’s six-part documentary series, which premieres Monday, Feb. 3 at 10/9c, is a deep dive into the story, largely relying on interviews with some of the main players: FBI agents, a McDonald’s corporate employee, family members of the scammers, and even some of the “winners.” Though the story seems like it should be cut-and-dry, there are multiple twists and turns, as well as plenty of interesting characters that pop up along the way. And while an investigation like this involves an awful lot of paperwork, long-term wiretapping, and patience, McMillions finds a way to keep it amusing and illuminating, at least throughout the first three episodes sent to critics.

McMillions is technically a true crime documentary, though it doesn’t feel like what we’ve become accustomed to. Gritty, depressing true crime docs litter television — just take a cursory glance at Netflix! — and tend to focus on the more disturbing crimes, uncomfortably (and exploitatively) delighting in getting into the heads of murderers. McMillions, then, sometimes feels like an anomaly: it frequently takes a light-hearted approach, complete with music that could score an Ocean’s Eleven heist scene, silly reenactments (such as one dramatizing an agent reading a Post-It note), and Doug Mathews, a colorful special agent who comes off less of a member of the FBI and more like an over-excitable puppy eager to play with the big dogs. 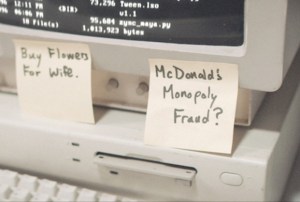 Mathews took an interest in the McDonald’s case partly because he was intrigued by the Post-It and partly because he was just “bored to death of this healthcare garbage” that he was working on. He treats the investigation like a game, excitedly suggesting sting operations and undercover plans (despite not being trained in going undercover), donning a ridiculous outfit to a serious meeting with McDonald’s corp, and, at one point, enthusiastically suggesting a silly and expensive Las Vegas-related ruse that the other agents balked at. (In the reenactment of this, someone hilariously writes “RUSE” in large letters on a whiteboard, just in case we weren’t sure.) Of all the FBI agents, Doug is essentially the star of the docuseries because he’s the one who is most excited, who isn’t reserved, and who is constantly chatting. “Doug is one of the hardest working agents I’ve ever met in my life,” says one of his coworkers before adding: “And he can talk forever. He is relentless.”

But McMillions‘ most memorable moments might not be from Mathews but instead from the people directly involved with the scam. The family members of mobster/scammer Jerry Colombo (not to be confused with Jerry Jacobson; everyone refers to the latter as “Uncle Jerry”) are interviewed, explaining their family in very matter-of-fact ways. (The Colombo family is one of the big five crime families in New York City.) When they talk about Colombo opening a night club called Fuzzy Bunny, they reason that it shows he “had his morals” because it wasn’t full nudity. “I was proud of him for doing something legal for once,” a relative says. (I won’t spoil it here, but the eventual trajectory of Fuzzy Bunny is truly weird and fitting for a fictional story.) But there is also a tinge of sadness, especially from his wife Robin, who eventually speaks openly about their marital problems and her fears regarding her husband’s connections.

In the third episode, we learn more about one of the “winners,” Gloria Brown, who is a Black single mother making $24K a year pre-taxes. A glance at the McDonald’s scam makes it easy to write off most of the “winners” as people who just wanted easy money but hearing from Gloria puts a different face on it. “I just wanted a better life and I just felt like this was my opportunity,” she explains. Her interviews are a tough watch: It’s clear that she was basically tokenized because being Black meant she wouldn’t be linked to the Colombo Italian family tree, and it’s clear that she was used and exploited in a way that she wasn’t prepared for, especially when she goes into more detail about what Jerry expected in return.

Directors James Lee Hernandez and Brian Lazarte craft a documentary that is able to show both sides of the story: the inherently comical aspects that seem made-up and the very real, devastating effects of the entire scam. It’s not totally balanced — the first two episodes are definitely lighter and have a fun retro-feel that’s only heightened by vintage McDonald’s commercials and old-school marketing, while the third episode goes dark pretty quickly and hovers there.

While it’s not entirely successful, the directing team’s approach is certainly skillful, and McMillions is definitely a fun watch. But be warned: You will likely find yourself craving McDonald’s while watching the overhead shots of french fries splayed on a conference table, or the close-ups of someone sipping a fountain soda.

TVLINE BOTTOM LINE: McMillions is a juicy, informative docuseries that entertainingly chronicles a bonkers scam and the players it hurt.