Emergence’s first (and potentially only) season ended Tuesday on a super cliffhanger-y note — but not every storyline was left unresolved. The finale finally brought The Dreaded Upload to fruition — and the result wasn’t as heartbreaking as you may have expected. Read on for the details of “Killshot Pt. 2”:

The episode picks up where last week’s left off, as Jo and Brooks attempt to escape the Plum Island facility where Helen has them cornered. In a worrying twist, Helen can now transform into a cloud of insect-like nanobots (?!), allowing her to travel through pipes and enter other rooms, sort of like how Alex Mack used to turn into a puddle of silver goo and seep under doorways. But I digress. At one point, a stray nanobot flies into the room where Jo and Brooks are currently hiding, and Brooks successfully smashes it on a table. But when Jo picks up the nanobot to get a closer look, it springs back to life and crawls under Jo’s skin, swiftly working its way up to her neck — until Brooks grabs a paring knife and cuts it out of her, which all happens way more nonchalantly than it should.

Meanwhile, Alex and Piper head to the Southold police station and successfully spring Benny out of his cell, thanks to Piper’s doe-eyed expression and convenient telekinetic powers. Along with Jo’s colleague Chris, the three of them head to Plum Island and meet up with Jo and Brooks, much to Jo’s chagrin. Upon arriving, though, the group discovers a sealed biocontainment laboratory in the Plum Island facility that Helen can’t teleport into, and Jo reluctantly agrees to play the waiting game from inside the safe-ish location. 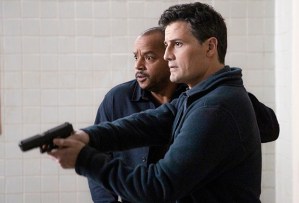 Eventually, after much debate about Helen, the power source she’s seeking and the killshot that should end her once and for all, Benny devises his own plan: He messes with the wiring in the biocontainment lab so that Helen can enter the room, hoping to lure her out and use the killshot on her. He convinces Jo to go along with the plan, too — but a few moments later, Jo watches from behind a shelf as the plan goes terribly wrong. Helen does show up in the lab, and Benny does use the killshot on her… but Helen merely turns around, places a hand on Benny’s chest and calmly says, “Benny, we’re so far past this now.” She then leaves the room, and Benny suddenly collapses on the floor before bleeding out and dying in Jo’s arms. (Nooo, Benny! Say it ain’t so!)

Helen ultimately obtains the power source she’s been chasing for weeks, and she brings it to another room in the facility where that strange, blob-like sphere is sitting on a table. Just before Helen can connect the power source to the sphere, though, Piper shows up and tries to stop her. She’s not able to keep Helen from starting The Dreaded Upload… but once the upload begins and Piper starts levitating, Helen goes over to the girl and brushes her hair out of her face, at which point Jo arrives and slaps one of those tranquilizing bracelets onto Helen’s wrist before punching her. (And she’s got quite an arm — Helen loses consciousness before she even hits the ground!)

But a second, different threat looms now that Helen is out of commission and the upload has been interrupted: That blob-like orb starts swirling faster and faster, and Alex warns that when it erupts, it could do damage akin to a nuclear bomb — and Piper agrees that everything from Plum Island to Jo’s house in Southold will get destroyed. To that end, she decides to sacrifice herself, forming a protective bubble around herself and the orb so that only she gets vaporized when it finally goes off. Jo, Alex and the others begin to cry as Piper refuses to budge from her decision, and Piper says goodbye with the sweetest parting words to Jo: “I’m happy I was part of your family.” (It’s fine. I needed a good cry today. It’s fine!)

When the orb finally erupts, a column of blue light bursts through the roof of the Plum Island facility, and Piper is suddenly no more. But the group only cries for a few moments before Alex has an idea: If Jo has the exabyte disk with Piper’s code on it (which Piper gave to her before sacrificing herself), and Helen can transform herself to look like anyone (which she now can, thanks to her nanobot-ness), then can’t they just… create a new Piper? Though she’s skeptical at first, Jo gives it a shot — and when she attaches the exabyte disk to Helen’s arm and takes off that bracelet, Helen wakes up and suddenly turns into Piper, who seems to be her normal self. Yay! The technology is all a bit confusing, but yay! 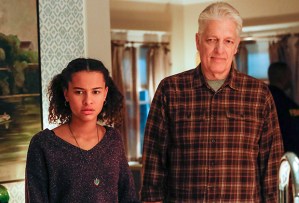 Of course, that happy ending is a bit too easy, so Emergence throws us a curveball in the episode’s final moments. Earlier in the episode, Ed and Mia got an unpleasant visit from Michael Denman, the shady Department of Justice agent who suspiciously let Brooks walk free last week. He had arrived at Jo’s house with a search warrant, seeking the exabyte disk with Piper’s code on it, but all he found when he opened Ed’s safe was the necklace that Mia had given Piper when she first arrived in Southold. “You win some, you lose some,” Michael had shrugged, before ominously wishing Ed good luck with his cancer battle.

At the end of the hour, we come to learn that Michael — along with Loretta, Helen’s “good” twin — have long been involved with Helen’s plan to get the power source and start the upload. Michael and Loretta arrive at the Plum Island facility where Benny had been killed and Helen had been, uh, reborn, and Michael realizes that the killshot was used at some point. “No sign of Helen, though,” he remarks, leading Loretta to inform him that Helen still exists… but she exists in Piper now.

“That’s bananas. But I like it — if it works,” Michael says, to which Loretta responds that she was “just about to conduct a test.” Holding what looks like a TV remote control of sorts, Loretta attempts to “wake [Helen] up”… and when she does so, Piper suddenly wakes up, wide-eyed, in her bed at Jo’s house.

Your turn! What did you think of Emergence‘s season finale? Grade the episode in our poll below, then drop a comment with your full reviews! And for the latest on the show’s renewal prospects, keep tabs on our Renewal Scorecard.