Exactly one month has passed since Sabrina Spellman trapped her father inside her boyfriend and sent them both to hell, and not a day has gone by that she hasn’t attempted (and failed) to rescue poor, hot Nicholas from the underworld. Fortunately, she’s aided by the world’s most understanding ex-boyfriend, who tells Sabrina that he’ll guard the mine “as many times as you want” while she attempts to open the fiery gates. Few, if any, high school-aged boys are capable of such blind loyalty, but it’s long been established that Harvey Kinkle is a prince among exes. We stan.

After accepting that some gates weren’t meant to be opened, Sabrina turns to Dorian for assistance, using one of his paintings as a back-door portal to Madam Satan’s dominion. (She promises to bring back an unholy flower capable of healing his pimple. Because why not.) Naturally, Sabrina’s three human pals — who have since formed a bitchin’ garage band called The Fright Club — follow her to hell, which looks a little different than she envisions in her nightmares. In fact, the real hell turns out to be more like The Wizard of Oz, complete with a cursed brick road, a tortured scarecrow (Theo’s uncle!) and an evil tin man (Harvey’s brother!).

Following a close encounter with a few more familiar faces, Sabrina’s squad is summoned to meet with Lilith, who still looks a lot like Ms. Wardwell. (As she rightfully explains, “a face like this is hard to beat.”) The self-crowned queen of hell offers to return Nick to the land of the living in exchange for Sabrina’s public support of Lilith’s claim to the throne. It seems like a perfectly fair trade, as far as deals with the devil go, but it isn’t long until the plan hits a pretty serious snag. 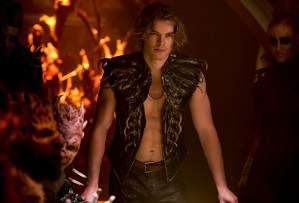 You see, hell’s royal court isn’t exactly keen on “Lucifer’s concubine” (and that’s among the nicer things they label her) calling the shots, nor do they fancy the idea of an earth-dwelling child like Sabrina sitting on the throne — regardless of it being her birthright. Instead, the kings of the netherworld propose a more pec-tacular option in the form of Caliban, a golden-haired prince who was forged from hell’s scorched terrain.

Sensing this discord from within Nick’s shirtless frame, Lucifer takes a break from their eternal shirtless wrestling match to give his disobedient daughter a shirtless pep talk. Sure, he intends to torture the ever-loving crap out of her for everything she’s done, but first, it’s her duty as a Morningstar to assume the throne and maintain the cosmic balance.

Her friends, as always, remain dopily optimistic about Sabrina’s abilities to juggle life as a “cheerleader by day, queen of hell by night,” all the while blissfully unaware that a sinister group of pagans has just entered Greendale — and hell will soon become the least of their concerns.

* After a month of housing the students from the Academy of the Unseen Arts at the Spellman Mortuary, Zelda reaches her breaking point. (Not only is there no hot water for her bath — again! — but she’s tired of having to dress everyone in clothes made out of curtains, Enchanted-style.) She decides to reopen the academy, appointing herself its new directrix and glamouring Hilda to look like Father Blackwood. (They can’t have that pesky Witches Council suspecting that something is up!) And with the Dark Lord out of commission, Zelda’s shrinking coven turns to a new power source. All hail Madam Satan!

* Speaking of Blackwood, Prudence and Ambrose’s hunt for the problematic priest brings them to New Orleans, where Prudence traps him by masquerading as a classy lady named Ms. DuBois. Unfortunately, “Blackwood” reveals himself to be a mere henchmen, disguised to look like his leader — an extremely common occurrence in this episode, apparently. Traditional magic clearly won’t cut it, so the duo turns to voodoo for assistance, eventually tracking Blackwood to Scotland. More specifically, Loch Ness. (Yes, that Loch Ness.)

* And poor Ms. Wardwell returns to Baxter High with no freaking clue what happened in the three months she spent under Madam Satan’s influence. This time around, though, she’s just a teacher, as opposed to the school’s fearsome principal. (I guess neither of Michelle Gomez’s characters are fit to rule.)

Your thoughts on Sabrina‘s long-awaited return? Grade the premiere of Part 3 in our poll below, then drop a comment with your full review.