It’s finally here, Trekkies: Patrick Stewart is back as Jean-Luc Picard… and Star Trek: Picard is giving him a brand new mission.

Thursday’s series premiere opens with a cozy nostalgic moment for Next Generation fans, with Picard and Data sipping tea and playing poker aboard the Enterprise-D. The two old pals banter — when Data points out that Picard is stalling, Picard replies wistfully, “I don’t want the game to end” — but they’re interrupted when the ship starts to shake violently, and the nearby planet Mars explodes. It was just a nightmare, and Jean-Luc wakes up with a sloppy greeting from his dog (named Number One, of course) and gazes out at his idyllic French vineyard. Meanwhile, in Boston, a girl named Dahj (Isa Briones) is cuddling with her boyfriend when a squad of masked assassins transport in, killing the boyfriend. Dahj suddenly snaps into action and beats up the intruders, swiftly killing them without even knowing how she did it. Then she has a vision… of Jean-Luc?!

Back at Chateau Picard, Jean-Luc is preparing for a TV interview marking the anniversary of the “Romulan supernova.” (He orders a cup of his customary Earl Grey tea… but decaf this time!) We learn that Jean-Luc left the Enterprise to command a rescue armada to save the lives of Romulans stranded by the supernova, but the rescue mission was called off when a group of rogue “synthetics” attacked Mars, leading to a ban on all synthetic lifeforms. (Yes, just like Data.) Picard is still seething when the interviewer asks him why he quit Starfleet, shouting, “Because it was no longer Starfleet!” He still holds a grudge against them for abandoning all those Romulans — and back in Boston, Dahj catches a glimpse of him on TV and recognizes him as the man she saw in her vision. 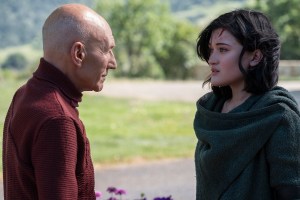 She tracks Jean-Luc down to his vineyard, and as she spills out everything that happened to her and her boyfriend, she confides in him: “Everything inside of me says that I’m safe with you.” He doesn’t recognize her, but he listens tenderly and invites her into his home, taking note of a necklace she’s wearing, with two interlocking silver rings. That night, he has another dream, this time of Data standing in his vineyard and painting a picture of a faceless woman. He wakes up, and we see a similar painting hanging in his study, with the woman’s face obscured. Dahj ran off in the night, and Jean-Luc heads to Starfleet Archives in San Francisco and digs through a room full of Enterprise memorabilia to find a second painting Data did. It’s of the same woman… but with Dahj’s face! And it’s titled “Daughter”!

Dahj is on the streets, and makes a panicked call to her mom, who tells her to go back to Jean-Luc. (How did her mom know she was with Jean-Luc, though? Hmmm.) Dahj finds him in San Francisco, and he tells her all about Data, and what a good friend he was to Jean-Luc. (“Android” is a dirty word these days, following the synthetic attack.) He tells her about the painting, too, and putting that together with her surprise fighting skills, he concludes: She must be Data’s android daughter. She doesn’t want to admit she is, in her words, “a soulless murder machine,” but Jean-Luc assures her that because she’s connected to Data, “you are dear to me in ways that you can’t understand.”

Their sweet moment is ruined, though, when more masked assassins materialize. An out-of-breath Picard ducks out of the way — hey, the guy’s in his 90s! — while Dahj karate-kicks them all into next week. (One loses his mask, and Jean-Luc sees he’s a Romulan.) Dahj’s last victim, though, spits acid on her, which sears through her skin and causes her weapon to explode, killing her and sending Jean-Luc flying through the air. Back on his vineyard, he decides, “I owe it to her to find out who killed her, and why.” He’s tired of spending his final days walking along grapevines: “I haven’t been living. I’ve been waiting to die.” 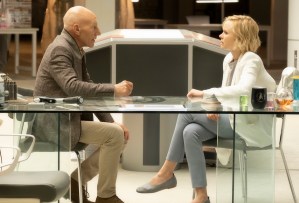 So he heads to the Daystrom Institute and meets robotic professor Agnes (Alison Pill), asking if it’s possible to make a sentient flesh-and-blood android. She laughs him off: The Federation shut down all robotics research after the Mars attack, and they’re now forbidden from making synthetics. They still have B-4 (Data’s brother) in parts in a drawer, but no one’s been able to replicate something as sophisticated as Data. Her mentor Bruce Maddox was trying, she says, but he vanished after the ban. Jean-Luc shows her Dahj’s necklace, and she notes the two rings, telling him that androids are created in pairs. So Dahj has a twin sister who’s still out there?

Cut to: a Romulan reclamation base, where we see a girl who looks just like Dahj. She’s named Soji, and is working on a project there, she tells a Romulan. (She has the same necklace on, too.) The camera zooms out, and we see that the base they’re working on… looks a whole lot like a giant Borg cube? Uh-oh… better put on another pot of Earl Grey, because things are about to get a lot more complicated.

Your turn, Trekkies: Grade the Star Trek: Picard premiere in our poll, and then hit the comments to share your thoughts.