Whoa… is that we think it is, Star Trek fans?

Thursday’s Star Trek: Picard premiere ended on a mystifying note, taking us to a Romulan reclamation site in space, where we met Dahj’s twin sister Soji (also played by Isa Briones). After she and a Romulan named Narek had a little introductory chit-chat, the camera zoomed out to reveal they were standing on… a giant Borg cube! What is going on here?! And we have to wait until next week to find out?

To get answers, TVLine turned to Picard executive producer Akiva Goldsman, who assured us our eyes weren’t deceiving us: “Clearly, the Romulans and the Borg are dripping with history in relation to Jean-Luc Picard, so not coincidentally, they exist in our season.” He confirmed that the site where we first meet Soji and Narek “is both a Romulan base and a Borg cube”… but “in a way that is probably not the way you’re thinking.” 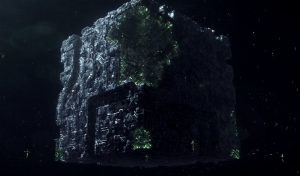 That shot of the Borg cube “is a weird place to leave after the first episode,” fellow EP Heather Kadin admits, “but hopefully, it makes people go, ‘Wait, what’s going on?’ And then they have to keep watching.”

We won’t learn more until Episode 2 debuts next Thursday on CBS All Access, but Goldsman encourages fans to stay tuned to get the whole story: “For us, the first three episodes are the pilot… By the end of Episode 1, you’ve met maybe two-thirds of the cast. We’re starting these relationships, and over the next couple of episodes, they will at least solidify in the earliest form… So the first three episodes of our ten are really the first act.”

But what can we expect from Soji? Is she anything like her sister Dahj, who tragically died earlier in the premiere? “Just as you know with any two sisters, they have a lot of similarities, but they also have a lot of differences,” Briones teases, adding that we’ll learn “their paths are very different.”

Beam down to the comments and share your thoughts on the Picard premiere.