TV vet Maggie Lawson finds herself Outmatched as a mom of four — three of whom are geniuses! — in Fox’s new family comedy premiering this Thursday at 8:30/7:30c (leading out of Last Man Standing).

Penned by Lon Zimmet (LA to Vegas) and starring American Pie lover Jason Biggs as Lawson’s TV hubby, the multi-camera sitcom presents the Psych alum as not just a clever mom, but an A.C. casino pit boss, to boot. 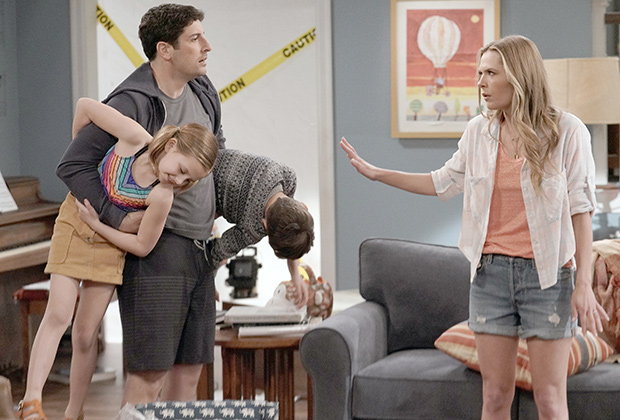 “I love that she’s tough and scrappy, because that’s not necessarily how I usually get cast,” Lawson tells TVLine. “That was so attractive to me because I’ve never really played that. I mean, in [ABC’s] Back in the Game I was a bit tough, but this is pit boss tough.”

Lawson also relishes the parental role reversal, in that when dealing with their exasperating quartet of kids, Kay is, shall we say, “a bit less sensible” than husband Mike. “Usually, I’m the softer one, or the sweet one, or the grounding one, but in this show I’m sort of the one that gets carried away,” she previews with a gleam in her eye. “Like, I need to be reeled in a bit while he’s the sweet, grounding one. That’s really fun and different.”

It’s impressive that Lawson can still find “fun and different” after the variety of roles she has filled over the years, from starting out Unhappily Ever After to stealing youth in Smallville, from exhibiting Model Behavior to falling in love with both a Psych and a Lethal Weapon. Here, in TVLine’s Memories From the Set feature (click here for direct access), the sunny actress reflects on those past roles and many others.