There’s a horrifying scene during Prodigal Son’s midseason premiere in which a desperate Malcolm Bright shatters his own thumb with a hammer. Intentionally!

And yet, something else happens in this episode that is decidedly more painful for Malcolm — and it’s going to sting for a while. Read on for the details of “Alone Time”:

Having been captured by the Junkyard Killer in December’s fall finale, Malcolm now finds himself shackled to the floor in a very bleak, dungeon-y location. When the Junkyard Killer (whose real name is John Watkins, we’ve learned) eventually joins Malcolm, the two men engage in some mutual mind games: Malcolm tries profiling his captor, telling Watkins that he’s merely a product of his terrible upbringing and not destined to be a serial killer; Watkins counters that killing is his calling, and he expects that even Malcolm can become a murderer once he gives him a series of “trials.” (Malcolm, despite his best efforts, can’t hide that he’s a little spooked by that idea.)

During his time in captivity, Malcolm tries to get answers about that camping trip he took with his father and Watkins, including some long-awaited truths about that girl in the box. He even starts to assume that he’s being kept in the cellar of the cabin from that camping trip, especially when Watkins hints that their location is “the place where it all began.” Unfortunately for Malcolm, he doesn’t get any new intel about the girl; Watkins seems annoyed that she’s even a conversation topic, and he tells Malcolm that his father disposed of the girl on his own, without Watkins.

But much more shocking news comes out of their chat later. First, Watkins reveals that Malcolm stabbed him in the side during that camping trip, showing off a doozy of a scar that was left from the wound — and, feeling vengeful, Watkins stabs Malcolm (!) to even the score. Malcolm quickly gets woozy from the blood loss, and his therapist appears to him as a “stress-induced hallucination,” urging him to stop profiling Watkins and stop trying to force the repressed memories from that camping trip. Instead, Malcolm solely needs to focus on surviving.

Still, Malcolm continues to wonder why his younger self would have been driven to stab Watkins in the first place — and he later gets his answer, though he’s probably left wishing the truth had never come out in the first place. When Watkins returns, he informs Malcolm that his father brought him on that camping trip… to kill him! Yes, Martin Whitly had apparently grown frustrated that the chloroform-soaked rag didn’t work as well on Malcolm as he’d planned, and when his son started to remember things that Martin couldn’t risk getting out, he decided to murder him. 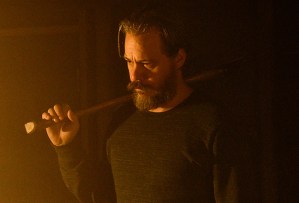 When the men arrived at the cabin, though, Martin couldn’t go through with the kill — and when Watkins tried to finish the job himself, Malcolm stabbed him and made a run for it. Present-day Malcolm asserts he’s not a killer, and he reminds Watkins that his entire job is to protect his community and his family… but Watkins believes that Malcolm’s love for his family is his fatal flaw, just like it’s Martin’s biggest blind spot, too. As Watkins picks up a big axe and looks prepared to do horrible things with it, Malcolm urges him to ignore the voice in his head that compels him to be a bad person. Almost gleefully, Watkins informs Malcolm that he likes the voice; it’s a part of him, actually! And with that, he opens a door in the side of the basement, revealing that he and Malcolm aren’t holed up in that camping cabin, after all; they’re actually underneath Jessica Whitly’s house, and Watkins suddenly seems laser-focused on harming Malcolm’s mother and sister, who are upstairs worrying about Malcolm’s whereabouts. “No place like home,” Watkins grins before exiting the basement, leaving Malcolm to his own devices.

While all of this is happening, the FBI and NYPD are working together to find Malcolm, and they’re all under a similar impression that Malcolm is being held captive at the camping cabin. A reluctant Gil even pays Martin a visit in solitary confinement, asking where Watkins would have taken Malcolm — and even Martin thinks the cabin is the answer! But the cabin turns out to be a dead end, and by the time Malcolm’s real location dawns on Martin, it’s too late. Watkins is already inside Jessica’s house, chasing her and Ainsley through the dark rooms with his axe. (He does clock Ainsley in the head at one point, but her wound looks worse than it is!)

Meanwhile, Malcolm gets another stress-induced hallucination, this time of his father — and Martin is surprisingly helpful, despite recent revelations that he tried to murder his own son. He informs Malcolm that his hand is five inches wide, and the restraints that Watkins put on him are only three inches in diameter… so Malcolm needs to make his hand three inches, too. And he does. By breaking his thumb with a hammer. It’s all very Saw, and it’s terrible. But once he wriggles out of his restraints, Malcolm grabs a crowbar that Watkins left on the basement floor — uh, that feels like a rookie mistake — and heads upstairs into his mother’s house.

Just as Watkins is closing in on Jessica and Ainsley, chopping through a bedroom door in a moment right outta The Shining, Malcolm calls Watkins’ name from inside the house, and Watkins is compelled to track him down. He returns downstairs to locate his captive, but before he can, he gets distracted by a large trunk that’s sitting with the lid open in the living room — a trunk that’s not unlike the one Martin’s female victim was kept in all those years ago. Watkins almost seems entranced by the box, inching toward it as memories of his traumatic childhood begin to flicker in his head. As he nears the trunk and leans closer to it, Malcolm strikes him from behind with that crowbar, which he also uses to lock the box once Watkins is thrown inside.

Malcolm then reunites with his mother and sister, who are understandably thrilled to see him. Jessica asks if Malcolm killed Watkins, and though the answer is no, he assures his mom that “he’ll never be able to hurt us again.” And with that, it’s time for a much-deserved group hug.

OK, your turn! What did you think of Prodigal Son‘s first episode back? Grade it in our poll below, then hit the comments with your full reviews!