The “Crisis on Infinite Earths” may be over, but its resolution appears to have left Batwoman‘s mind-blown Kate Kane doing a double take.

At the close of this Sunday’s midseason premiere — which, it must be noted, also had Batwoman publically coming out as a lesbian (via a Kara Danvers exclusive for CatCo!) — Kate received quite the birthday surprise, in the form of her kindly sister Beth, newly returned from a semester abroad.

Immediately assuming (as did we all) that Alice had somehow escaped police custody and was taunting her adversary, Kate grilled her brunette visitor, first insisting she was Alice and then, when denied, asking who/what this person was, all while she tugged at her face looking for skin mask.

“It’s Beth!” the thoroughly puzzled young woman repeated. “Who the hell else would I be?!”

The surreal reality of the reunion then seemed to dawn on Kate: “Beth…?” 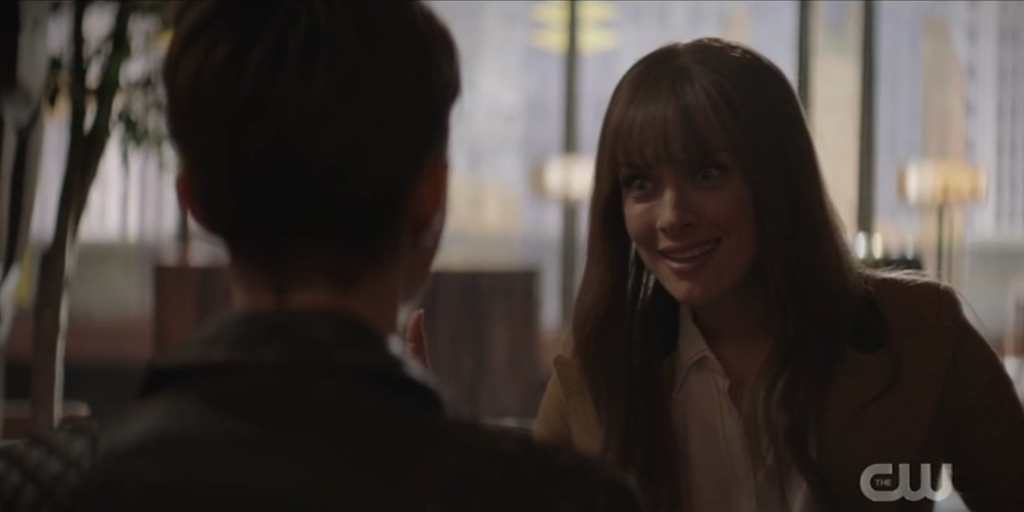 Given that Alice had just been seen cuffed at the cop shop under Sophie’s watchful eye, and given that Kate wasn’t able to rip loose any Mouse-like face mask, all signs point to Crisis fallout — that in the new multiverse a dying Oliver Queen created, a Beth Kane who didn’t morph into villainous Alice was deposited on the same Earth-Prime as her doppelganger.

“We have some [‘Crisis’] fallout on Batwoman,” showrunner Caroline Dries previously affirmed. “It’s a little tricky, because our characters aren’t yet exposed to this notion of multiple universes and superheroes with powers and stuff… but I think it will have really shocking resonance.”

With the creation of this new multiverse — in which, for example, Earth-Prime’s Lex Luthor is regarded by the world as a very good guy — “The thing that has us really excited is we have put into our universe a new mystery, which is: What does this post-Crisis universe look like?

“Each of the shows gets the chance to tell a piece of that story, and that’s really cool,” he added. “I know, for example, what they’re doing on Batwoman and it’s friggin’ awesome, with some unbelievable, ‘What the f–k?!’ kind of moments. In addition to the heart and emotion, the ‘what-the-f–k?!’ is in my mind what the Arrowverse is all about.”

Did this Beth reveal have you saying, “WTF?”