Fox two-stepped down to Texas on Sunday for the series premiere of 9-1-1: Lone Star, a dramatic tale of heroism, tragedy and the importance of a personalized skincare regimen.

Here’s the story: Six months after an ammonium nitrate-fueled explosion wipes out all but one member of Austin, Texas’ Ladder 126, the Department of Justice turns to a decorated Manhattan fire captain (Rob Lowe as Owen Strand) to help rebuild the fractured firehouse from the ground up. The manicured-yet-rugged city mouse is naturally hesitant to upend his entire life… until a series of unfortunate events forces him to reevaluate his priorities.

For starters, Owen’s son TK — an out gay firefighter with a substance abuse problem, played by Ronen Rubinstein — tries to kill himself when his boyfriend, to whom he planned to propose, reveals he’s in love with someone else. (Side note: Who would choose a spin instructor over a firefighter? TK can… and will… do better.) On top of that, Owen’s doctor diagnoses him with stage 1B lung cancer.

“We try to find a personal emergency for our characters,” executive producer Tim Minear tells TVLine of Owen’s medical ordeal. “When you met Abby in Season 1 of 9-1-1, her mother had Alzheimer’s. And Athena’s marriage was falling apart. And Bobby had a secret that he left behind in Minnesota. These personal emergencies are a big part of the show, so when we decided to make Rob a survivor of 9/11, that is the story of those first responders. They may have left the dust cloud behind 20 years ago, but they couldn’t always completely run away from it. The incidents of after-effect illnesses with people who were at ground zero is a real thing.” 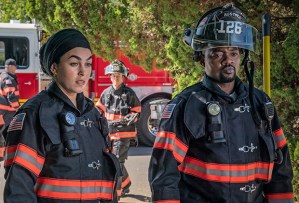 Concluding that a change would do them good, Owen and TK relocate to Austin, where they immediately begin building a diverse team. First up is Marjan Marwani (played by Natacha Karam), a devout Muslim woman with a reputation for being a bit of an adrenaline junkie. “I don’t see a Muslim or a woman,” Owen tells her. “I see a kick-ass firefighter.” (Uh… thanks?)

Up next is Paul Strickland (played by Brian Michael Smith), a black transgender man who cut his teeth on the mean streets of Chicago. “People here would lose their minds,” TK speculates of Paul’s hiring, which is precisely what interests his father. And last but not least is Mateo Chavez (played by Julian Works), whose dedication and meticulousness encourage Owen to overlook the fact that he’s flunked the entrance exam four times.

Unfortunately, not everyone is found fit to fight. After meeting with Judd Ryder (played by Jim Parrack), the only original member of Ladder 126 to survive the aforementioned explosion, Owen determines that the embattled hero isn’t ready to return to the line of literal fire. Shocker: He isn’t particularly receptive to Owen’s “fake-ass condolences.”

The pilot also introduces us to chief paramedic Michelle Blake (played by Liv Tyler), whose reputation as a life-saving hero and inspiring humanitarian is put at risk by an obsession with her sister Iris’ disappearance. When she’s arrested for screaming outside the home of the man she believes to have murdered Iris, she’s taken into custody by Officer Carlos Reyes (played by Rafael Silva) — and it’s clear that this is a pretty regular routine.

Though Owen and Michelle initially butt heads when their teams arrive at the same emergency call, they eventually develop a good rhythm… which they later put into practice on the dance floor. And if you think you imagined that spark between TK and Carlos, just wait until tomorrow night.

After flaunting his apparent line-dancing prowess, Owen encounters Judd’s wife Grace Ryder (played by Sierra McClain), who encourages him to find a place for Judd in the firehouse, even if he isn’t ready to battle a blaze just yet. “Saving life is like oxygen for him, and he’s suffocating,” she explains, which ultimately lands Judd back in the driver’s seat. (Well, that and Judd’s devastating emotional breakdown at the sight of his fallen team members hanging on the wall.)

Your thoughts on the 9-1-1 spinoff’s big premiere? Grade the episode in our poll below, then drop a comment with your full review.