THE SHOW | HBO’s The Outsider

THE PERFORMANCE | There were plenty of reasons to keep our eyes glued to The Outsider’s series premiere: The unsolved mysteries! Jason Bateman’s excellent direction! That creepy guy in the hoodie!

But it was Mendelsohn’s intense, yet restrained, debut as Det. Ralph Anderson that made the episode truly gripping. When Cherokee City, Ga., is rocked by the gruesome murder of a young boy, Ralph takes the lead on the investigation — and his job is made all the more difficult by the still-painful loss of his own son, Derek.

Throughout The Outsider’s first hour, Mendelsohn’s performance was exquisitely measured, but Ralph’s feelings about Frankie Peterson’s death were always clear. In one scene, Ralph was oddly detached as he questioned the first of several witnesses; in another, his anger threatened to bubble over as he confessed that he wanted to “beat the f—king s—t” out of prime suspect Terry Maitland. As the investigation took shape, Mendelsohn struck a compelling balance between Ralph’s cynicism and his genuine disgust at the crime that had taken place.

The actor was most affecting, though, when Ralph’s grief for his child began to seep into his detective work. At the end of the premiere, Ralph and his wife, Jeannie, paid a visit to their late son’s grave on his birthday, and Ralph admitted that his own personal loss tends to color his investigations — and he’s not even sure if Terry Maitland really killed Frankie Peterson.

“I can’t tell. I don’t know. I really don’t know,” Ralph wept, and Mendelsohn’s anguished line reading brought fascinating depth to a hardened character. We were already intrigued by the supernatural mysteries unfolding on The Outsider — but with a performance like Mendelsohn’s anchoring the show, we’re even more enthusiastic about the season ahead. 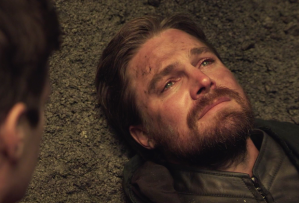 HONORABLE MENTION | As Crisis neared its end, Arrow‘s Stephen Amell had a formidable task: bring to life an imposing new persona, and then ease into death the hero that we knew and loved. On the former front, Amell found just the right level of gravity in Spectre’s voice, as the powerful figure laid out for the Paragons their universes-saving itinerary. Similarly, when toe-to-toe with the Anti-Monitor, he projected a ferocity that sold us on Spectre being the villain’s equal. But it was in Amell’s very final moments, as an undefeated yet depleted Oliver, that he beautifully capped the character’s eight-season arc. “You did it. You all did it,” he said, beaming, to Barry and Sara. He then noted that while he in death will be at peace, “the real heroes are the ones that keep going. So keep going. Don’t ever stop. This new world, it needs both of you.” One final time Amell hit the bull’s-eye.

HONORABLE MENTION | Pretty much every episode of Freeform’s touching Party of Five reboot is guaranteed to evoke tears. But this week’s closing conversation between little Valentina and her mother Gloria really brought out the waterworks, thanks to Elle Paris Legaspi and Fernanda Urrejola‘s impressive ability to form an emotional connection — over a phone call, to boot! Speaking to her daughter from Mexico, Gloria had to reluctantly put an end to the pair’s frequent communications, for both of their sakes. The difficulty and heartache was palpable in Urrejola’s voice as Gloria explained to Val, “All our goodbyes, so many times a day, they take every inch of space… Can you help me so I’m not just living to hear you or see you?” Then, with a maturity far beyond Legaspi’s young years, Val tearfully promised, “I’ll be strong for you, mommy.”