The mystery of what happened to Dr. Bloom’s missing pain medication on New Amsterdam has been solved. During Tuesday’s episode, her occasional hookup buddy Dr. Ligon, whom she’d put in charge of doling out her meds, confessed that he took her pill. Although he was remorseful about what he did and distraught at the idea of losing another person in his life, Bloom still put a definitive end to their relationship.

“On the page, it was like they kiss, and then she’s like, ‘When you’re in rehab, don’t call me, don’t text me, don’t email me. We can’t ever see each other again,'” star Janet Montgomery tells TVLine. “And then I added in, ‘But you know that, right?’ because I felt like Bloom has been given so much forgiveness as an addict. Her work colleagues were like, ‘Go get better, come back.’ Yes, he’s done s–tty things to [Bloom], but he’s also an addict, and he has an illness.”

“I think it’s done between them, personally,” the actress continues, “but there was a real moment of tenderness. It was heartbreaking for Bloom, because it’s the first person that she’s trusted since being sober.”

But the real issue isn’t Ligon’s betrayal so much as it is Bloom’s own decision-making. “Why she chose another addict to take care of her medication, that says more about what’s going on with her and what she needs to work on,” Montgomery notes. “I think we always look for people to blame. When you go for the wrong guy or the wrong person, time and time again, who do you blame? You go, ‘This is my f—king family’s fault. This is my upbringing’s fault.'” To that end, the show will introduce Bloom’s mother later this season, which will force the doc to “really [be] confronted with everything she hates about herself, reflected back at her, and why she makes the choices she makes.” 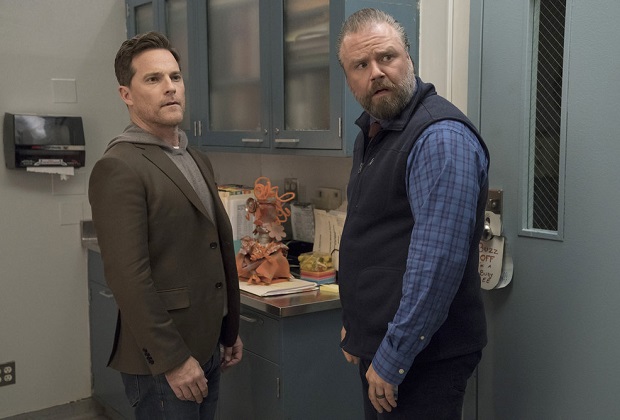 Elsewhere in the episode, Iggy found himself in an impromptu therapy session with his husband Martin, during which he revealed that he worries people will realize he’s a worthless loser if he’s not constantly helping others. That led his colleague Tabitha to unexpectedly point out that his behavior lines up with narcissistic personality disorder. The diagnosis “sends him spiraling, which leads into these other dangerous behaviors,” his portrayer Tyler Labine previews. “He takes it very seriously, and he can’t help but let it in, and he gets really paranoid, and he starts asking his colleagues if they think he’s neurotic.”

In fact, Iggy’s therapy breakdown, while a breakthrough moment, is “really the tip of the iceberg for someone who may be battling with some real depression and some issues,” Labine says. “The show is going to introduce, fairly quickly, that maybe he starts to try and fill the hole with food [and] some very strange eating behavior. We’re going down a few really crazy paths with Iggy” that will be “really worrying” and “cause for alarm.”

“Iggy’s going to kind of fall apart this season,” Labine warns, “and we’ll see if we can put him back together.”

New Amsterdam fans, what did you think of the episode? Hit the comments!