Apologies to Ken Jennings, but we admit we were rooting against him on Tuesday’s Night 4 of Jeopardy! The Greatest of All Time… just because this tournament has been so much fun, we don’t want it to end.

To recap, the primetime special brings back the long-running quiz show’s three all-time top earners: Ken Jennings, who still holds the record with his famous 74-day winning streak (total winnings: $3,370,700); Brad Rutter, who amassed the show’s top money total with $4,688,436 — and had never lost a Jeopardy! game to a human opponent, entering this tournament — and James Holzhauer, who set multiple records last year on his way to setting the mark for the top single-day winnings in show history (total winnings: $2,712,216).

Those three will face off in a tournament of three to seven primetime matches, with the first to win three nights earning the $1 million grand prize and the title of Jeopardy!‘s “Greatest of All Time.” (The two runners-up will receive a consolation prize of $250,000 each.) The episodes are a full hour long, as opposed to Jeopardy!‘s usual half-hour format, and of course, longtime host Alex Trebek is on hand to supply the questions… er, answers, that is. 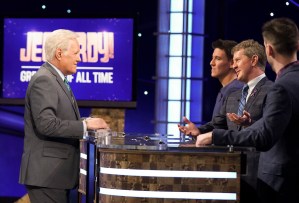 So far, Jennings has won two nights, with Holzhauer winning one and Rutter being shut out. On Night 4, then, Jennings was poised to win the whole thing — along with a gleaming golden trophy! — with one more victory. Game 1’s initial round featured categories inspired by ABC show titles (“The Bachelor,” “Modern Family”), and Jennings jumped out to a quick lead by hitting an early Daily Double, ending the round with a commanding 12,800 point total. In the Double Jeopardy round, Rutter zeroed out on yet another Daily Double — ouch — while Jennings fended off a surging Holzhauer and doubled his total again by correctly identifying the 1951 Tennessee Williams play The Rose Tattoo. He went all in on Final Jeopardy, too, and nailed the Greek region of Arcadia, ending Game 1 with 65,600 points to Holzhauer’s 34,181 and Rutter’s (gulp) zero. Check out the big brain on Ken!

Game 2 began with Holzhauer taking a savage swipe at Rutter: When the board wiped away their Game 1 totals, he snarked, “Hey, Brad’s score is still on there!” (Yep, still zero.) But jokes were about all that Jennings’ opponents had left at that point, considering his hefty advantage. Holzhauer held a 8,200 to 5,600 lead over Jennings after the Jeopardy round (Rutter had 1,000, for the record), but Jennings retook the lead in Double Jeopardy with a correct Daily Double response about former VP Adlai Stevenson. Holzhauer roared back, though, with a correct Daily Double response about the African nation of Chad. Entering Final Jeopardy, he held a 44,000 to 23,000 lead on Jennings, with Rutter trailing with 1,400. Could “Jeopardy James” complete a stunning comeback and extend this competition for another night? (Please?)

Alas, it was not to be. The Final Jeopardy category was “Shakespeare’s Tragedies,” and Jennings correctly identified Othello‘s Iago as the non-title character with the most speeches in a Shakespeare tragedy… but Holzhauer missed with Hamlet‘s Horatio, after betting it all. The final total: Jennings with 88,600, Holzhauer with 34,181 and Rutter with a mere 1,400. (But he did use his Final Jeopardy response to say, “You’re the best, Alex!” so that was sweet.) Congratulations, Ken! We weren’t rooting for you tonight, but you earned it!

What did you think of Tuesday’s Jeopardy! competition? And are you happy to see Ken Jennings crowned the champ? Drop your thoughts in a comment below.