If you thought you were starting to get a handle on what the potential Arrow spinoff would look like, think again.

In a first bevy of photos from the CW series’ penultimate episode, airing Tuesday, Jan. 21 and titled “Green Arrow and the Canaries,” we see Laurel (Katie Cassidy), Dinah (Juliana Harkavy) and Mia (played by Katherine McNamara) patrolling an atypically bright-n-clean 2040 Star City in both super-stylish garb as well as in their assigned crimefighting costumes. 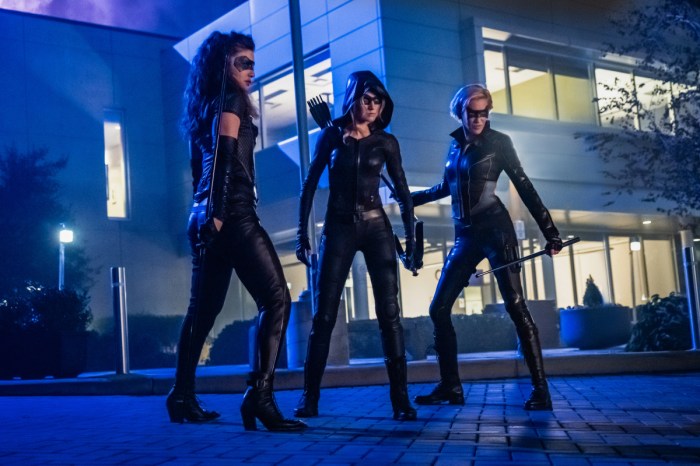 Also of note is the one photo that features guest star Raigan Harris (grown-ish, All American) playing something-something Bertinell?!

Per the official logline for the planted spinoff pilot, “It’s the year 2040 in Star City and Mia Queen has everything she could have ever wanted. However, when Laurel and Dinah suddenly show up in her life again, things take a shocking turn and her perfect world is upended. Laurel and Dinah are tracking a kidnapping victim with direct ties to Mia and they need her help. Knowing it will change everything, Mia can’t help but be a hero and she, Laurel and Dinah suit up once again to save the city.”