The latest Stephen King TV adaptation, The Outsider, premiered Sunday on HBO with two gruesome episodes that set up the novel’s mind-bending mystery, while raising a gazillion questions. For those who haven’t read the book, the story revolves around the investigation into the horrific murder of a local child and “the mysterious force” surrounding the case. This was a meaty double-scoop of episodes, so let’s get to it.

SCENE OF THE CRIME | We open with a man and his dog casually strolling through a park until the pup catches a sniff that points him toward a grotesque discovery. Day turns to night, and Detective Ralph Anderson (Bloodline‘s Ben Mendelsohn) is on the scene examining the body of a mutilated young child named Frankie Peterson and oh man, did they go there with the gore. The body shows tissue tears in the upper torso with teeth impressions around the edges. According to the coroner, it’s not an animal attack. (Brace yourself for the weird, folks!) Anderson interrogates the dog owner before notifying the boy’s family of his horrific fate.

CAN I GET A WITNESS? | The next day, Anderson speaks to a woman who claims to have seen the boy outside of a grocery store. Local teacher and baseball coach Terry Maitland (Ozark‘s Jason Bateman, who also directed tonight’s two episodes) stopped to chat with Frankie and offered him a ride in a white van with out-of-state plates, the woman says. (Beware the shady vans, kids.) That’s enough for Anderson to justify ordering copies of Maitland’s prints.

The next interview is with a young girl who was walking near the park where the boy was found. She says she saw Maitland’s white van and found Coach covered in blood, particularly dripping from his mouth. He offered her a story about a nosebleed before getting back in the vehicle and driving away, but even the youngster doesn’t believe him.

Strip club manager Claude Bolton reports Maitland came in with a broken nose that night, looking to change his clothes and find a doctor. Bolton wonders why a man with a nosebleed would have blood on the back of his jacket, and frankly, all reports combined, it’s not looking good for Coach Terry!

A cab driver tells Anderson she picked up Terry from the club and drove him to a train station. Terry told her he needed to take the overnight to Dallas-Fort Worth, but didn’t say anything else. She does recall his eyes, though, which look blank, dead and definitely creepy. 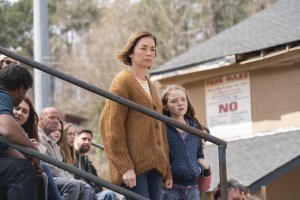 ‘ARRESTED’ DEVELOPMENT | Anderson’s ready to arrest Maitland for the murder, and he wants to do it very publicly. “Read him his rights, loud, clear, so that everyone can hear. And then cuff him in front so everyone can see,” Anderson orders his deputies. They snag Maitland right off the baseball field; he’s stricken yet cooperative as he’s dragged away in cuffs, but his wife Glory doesn’t take the arrest sitting down. She understandably freaks before calling attorney Howie Saloman, and in between gasping breaths, reveals, “He wasn’t even in town that day!” Howie advises her to head home and make sure the cops don’t take anything that isn’t on their search warrant. He also instructs her to say nothing. Smart man.

Glory heads off heaps of police swarming her house like an ant colony. The scene pans to a crowd of looky-loos, and among them is a tall, dark figure in a gray hoodie that… kind of resembles Terry? The cabbie was right — there’s something sinister going on in those eyes, and in King’s world, anything is possible.

THE PLOT THICKENS | Anderson reviews video footage from the club which shows Terry everywhere. “It’s like he’s begging us to catch him. But what kind of criminal does that?” he asks.

Lab results confirm that blood samples from the scene and van match the boy’s, and blood on a tree branch and the steering wheel are the same type as Terry’s, which, unfortunately for him, is the rare AB positive found in only three percent of people. Anderson doesn’t jump the gun; he knows he needs DNA evidence to close this case. He begins questioning Terry along with Detective Yunis Sablo trying to pry a cheek swab out of their suspect, but Maitland is adamant: He wants his lawyer.

With lawyer Howie by his side, Terry tells them he was in “Cap City” during the time of the murder attending a teaching conference with two of his colleagues. His whereabouts seem specific and detailed, and if he’s being truthful, should be easy for Anderson to confirm. Between the alibi and swab results, will Terry earn back his freedom? Regardless, the cops are holding Terry for now, and unfortunately, walk him right by the boy’s enraged, grieving mother who just wants to bury her son already. Awkward! She later takes a baseball bat to her dinner table before clutching her arm and chest and collapsing in the kitchen. The Petersons are now a destroyed family of just two.

Howie hires P.I. Alec Pelley, who tracks down video footage of Terry at the conference asking a question to a panel. How can a man be in two places at once? How could he have been seen in the park and at the club? Anderson struggles to reconcile the alibi against the witness reports and, seeking answers, heads out to visit the hotel in Dallas himself. A book store clerk confirms Terry’s presence in her shop, leading Anderson to buy a pricey book Terry definitely touched. The prints match; the questions continue. 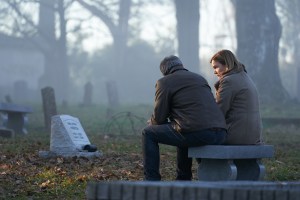 Back at the Maitland household, younger daughter Jessa wakes up screaming, “Tell him to get out of my room!” Glory assures her that no one is there, but we all know better. Run and hide, little Jessa!

Anderson and his wife visit a grave we can only presume is their son’s, and perhaps the reason why this case is haunting him. When asked by his wife, Jeannie, what his gut says, Anderson admits, “I don’t know, I really don’t know.”

GO TO JAIL, GO DIRECTLY TO JAIL | In Episode 2, the van still deeply troubles Anderson. “I’m as baffled by this conflicting evidence as you are,” he confides to Terry while visiting him in the slammer. He tells Terry that the video footage places him in Dallas, but also informs his suspect that credible witnesses have stepped forward. Terry remains firm: He did not see, talk to or murder the boy. Maitland tells Anderson a story of teaching the detective’s son, Derek, to bunt, which raised his confidence and prestige on the team. “When you ask me if I ever touched your kid,” says Maitland softly, “I really hope I did.”

CROSSFIRE AT COURT | The media circus over the hotel footage sends the town in a tizzy. When Terry is led to his first court appearance, a shooter opens fire, taking down a few officers and Terry, who takes a gnarly hit to his neck. Anderson guns down the assailant with a shot to the head and unmasks him: It’s the Petersons’ older son, Ollie. The amount of tragedy this family has faced is heartbreaking. Lurking in the background once again is the Outsider in his (its?) dark gray hoodie. He watches the hysteria before slinking into the crowd.

Later, at the hospital, an officer apologizes to Glory for her loss: Terry Maitland is dead.

JACK’S BACK | A troublesome character named Jack is introduced, and he’s pissed when his hunting trip gets interrupted by a text. We follow him to the club where he starts a fight and is kicked to the curb. It’s unclear what’s cookin’ with Jack, but he’ll probably be a thorn in Anderson’s side.

Despite his leave of absence following the shootout, Anderson heads back to work and finagles his way into the evidence room. He takes a photo of… something… before leaving the room and, oh hey, Jack! Jack is a detective? Yikes.

Anderson meets with the D.A. who tells him the saliva sample from the body matches Terry’s swab. The D.A. drops some slick Shakespeare prose like a boss before running down a list of inexplicable occurrences throughout history and comparing them to Terry. “You need to learn how to live with it and move on,” he says. But that’s not exactly Anderson’s MO.

JESSA’S NEW FRIEND | Jessa is still convinced a man is hiding in her bedroom, but it’s too early in the series for anyone to believe her. But the next night comes, and Jessa’s at it again with her Scary Man dreams or visions or whatever. Glory tends to her daughter’s panicked cries as the camera pans downstairs to reveal some sort of substance on the floor. (Is it blood?) What business does the Outsider have with Jessa, of all people?

While at the hospital visiting a colleague, Anderson and Sablo find Fred Peterson fresh off a suicide attempt. The man lost his entire family and attempted to hang himself. He’s not dead yet, but the outlook is bleak.

During a therapy session, we get confirmation that Anderson’s son is, in fact, dead, but Doc cuts right to the chase. Injuries to the psyche can take weeks or months to show themselves, but Anderson isn’t having it. He insists that it’s possible that he’s fine, even if he doesn’t feel like it right now. He’s no newbie to law enforcement, and this ain’t his first rodeo. (Note: In the book, Anderson’s son was away at camp. I like this better, actually.) 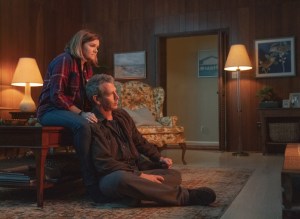 THE DEAL WITH DAYTON | The evidence Anderson copped was a torn corner of a flyer left under the van’s wiper. The flyer was an ad for a barbecue joint in Dayton, Ohio. Anderson and Sablo track down the teenager who originally stole the van and ask him if he’s ever been. The kid confirms he was nearby and, at the time, saw multiple people with smudges on their heads giving the detectives a concrete date: It was Ash Wednesday, March 6. The Maitlands were in Dayton March 3-7, but they flew both ways. How could Terry have commandeered the van, while also flying with his family? If more questions was what you wanted, you got ’em.

Anderson visits Glory, who wants nothing to do with him. He’s persistent. “The only way you’re gonna get your life back is by clearing Terry’s name. The only way to do that is to find whoever killed Frankie Peterson,” he says, pleading for her help. Glory shuts the door on him. Can you blame her?

Later, Howie sets up a formal meeting between Anderson and Glory, who’s now willing to hear him out. He tells her about the car thief and the fact that he knows they flew home. “It’s as if the van followed you home,” he says. He asks why they went to Dayton for a vacation, and Glory tells him they were visiting Terry’s dementia-stricken father. Maya, the Maitlands’ older daughter, reveals that Terry cut himself while on the trip. He fell down after bumping into a nurse in a hallway. He reached for the nurse, who was male, and when he got back up, his wrist was cut. Maya also says there was a barbecue restaurant near where they were staying, but Glory shuts the conversation down just before we (maybe) get some concrete answers.

We end with a farmhand finding a heap of strange clothes in a barn that appears wet with some sort of liquid. Is it the same substance that was on the Maitlands’ floor? He looks around as if he senses something. Cut to black.

Are you intrigued by this latest Stephen King story? Grade the series opener and drop your comments below!