The following contains Valhalla lotta spoilers from the Jan. 8 episode of History’s Vikings.

This Wednesday on History’s Vikings, an inevitability became a tragic reality— and a prophecy was shockingly fulfilled — as one of the epic saga’s bravest, truest and most formidable warriors met their end.

When White Hair and his stooges stormed the village Lagertha (played by original cast member Katheryn Winnick) now calls home, the onetime queen of Kattegat led a positively brilliant counterattack, baiting the brutes into an elaborately constructed, deadly maze featuring spikes, swords and fiery oil baths. After mauling many of his minions, Lagertha found herself face to face with White Hair, and a fierce brawl followed, one that slowly but surely chipped away at the famed shield maiden’s shield. But when it appeared that Lagertha had been bested and was ready/willing to ascend to Valhalla, she used her last shard of shield to gouge White Hair’s neck, slaying him.

Though Lagertha survived that battle, it did not come without cost. She had sustained grave wounds. Following some cursory treatment of her slashed torso, she strapped herself on horseback and set out into the stormy night, to find Bjorn. Eventually, her horse sidled up to Hvitserk’s home, and Lagertha slumped off the steed and into the muddy road. Hvitserk, ever haunted and hallucinating, stepped outside and saw what he believed to be a giant, hissing serpent — and violently stab it, he did! Except, it was of course Lagertha into whom his blade plunged.

And with that, Lagertha was dead. Long live the queen.

TVLine spoke with Katheryn Winnick about Lagertha’s final battle, her actual death, and what her storied run on the History series has meant to her. 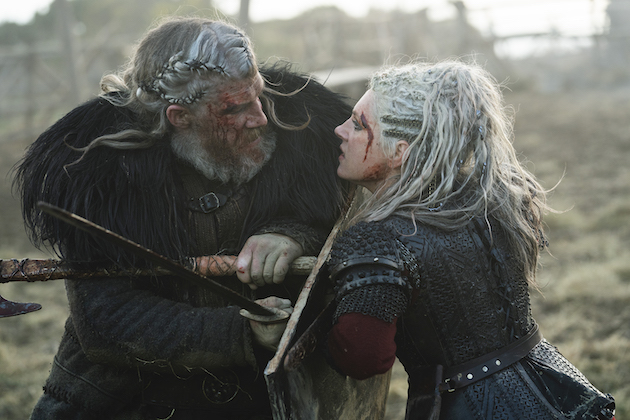 TVLINE | For starters, the fight with White Hair: Where did that rank as far as the intricacy of choreography you’ve done over the years?
That was actually an extremely intense rehearsal period, just because it was such an important moment for Lagertha, her last fight. It also had huge emotional arcs within it, to the point of exhaustion and physicality. I wanted it to be like a dialogue scene without the dialogue, where it has its own beginning, middle and a climax. It took us weeks, really, to rehearse that — with our stunt guys, but also together because once we rehearsed independently, [Kieran O’Reilly] is so much taller than me. Even with any rehearsal practice, it’s always different when you’re fighting someone with a different stature.

I actually helped a lot with the choreography to try to figure out the beats. I think we broke it up into four or five different sections, and the way we shot it, which is what I preferred, is to do one section over and over again until we get it. And then do the second section, because it’s so intense and the cameras have to catch those moments before.

TVLINE | I really thought that Lagertha had decided it was the end for her, but then there was that twist where she jabbed him with the shield shard, which was so Lagertha.
So Lagertha. She’s at a different stage of her life where she’s pulling up all her entire history of being a shield maiden, and also she’s physically exhausted, a lot older, and it’s mentally draining. She’s in a different place, also, losing her grandkid. This was her living her last moments, in fight-or-flight mode. 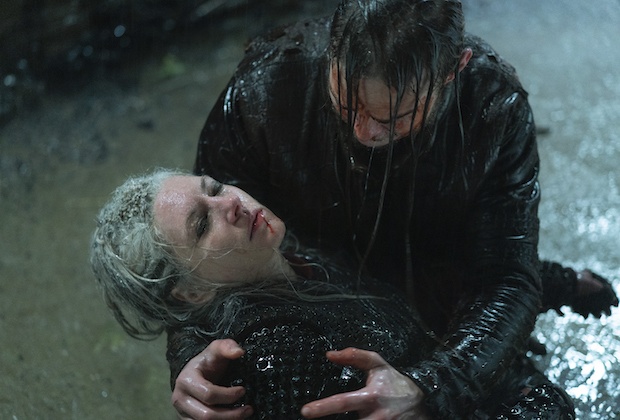 TVLINE | What did you think about the circumstances of what would be her actual death, at the hand of an unwitting Hvitserk?
In terms of Lagertha’s story, I couldn’t ask for a better death. They didn’t want to kill me off after six seasons, but I was like, there’s a time and place, guys. Lagertha’s got to go. She’s not immortal, but I wanted an epic death. I wanted something amazing. We’ve probably killed more than 200 [characters] over the years, so I knew that it could be overlooked, or it could be just no big deal, or it could not be a big event, but I think Lagertha deserves something that’s different and definitely heart-wrenching — and I think [series creator] Michael Hirst did a great job by writing that.

TVLINE | What sort of repercussions can you tease for Hvitserk after Lagertha’s death? Like, will he be found out right away? Will he try and cover it up? Does it weigh on him…?
[That comes out in] the episode I directed [airing Jan. 22]. It definitely weighs on him. Hvitserk always admired Lagertha, and he didn’t necessarily want to ever be the enemy, but he’s just so messed up. And I got to give Marco [Ilsø] a lot of credit. He did a great job acting, because it’s not easy to be in that state for so long and he did that really well. I’m glad it was Hvitserk in the end that killed Lagertha, and not Ivar or Bjorn or Ubbe. I didn’t imagine any of them doing it, and Hvitserk was the one that was least expected to do it.

TVLINE | What has Michael Hirst’s party line to you been over the years, as far as how long Lagertha would last on the show? Or were you pretty much left wondering season to season?
Originally when I came on, Lagertha was only supposed to last maybe two or three seasons. That’s it. Michael Hirst made it clear that it’s a show about the sons of Ragnar, it’s a male demographic show, it’s on History Channel, they’re mostly males that watch it… but I fought my way through, and they made creative choices with Lagertha that weren’t even really written so much in the earlier years. Luckily enough, the fans really spoke out and were beyond loyal. I’ve been so fortunate to have such loyal fans that it made it almost impossible to kill me.

TVLINE | What can you tease about Bjorn’s reaction to this loss? He was away at the time, which I imagine will crush him.
We see that Bjorn’s struggling being king. He’s struggling with the responsibility, making wrong choices, and I think Lagertha’s death really is the biggest low for him. 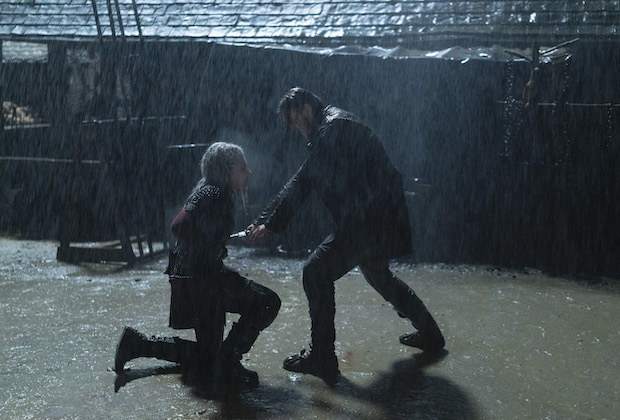 I’ll tell you one more thing about the death, though. We were shooting in the rain, and for some reason it was cold this year in Ireland. It was below zero, so it was probably the most physically challenging scene to shoot because you not only have to be present as an actor, but you try to not freeze to death. We had to have a medic on set, and every few minutes we would have to get into a “hotbox,” which is a little trailer that’s locked with heat, because our body was going into shock with hypothermia. It was insane. Even though you have leather and stuff, you’re soaked head to toe. It was really challenging.

TVLINE | It’s interesting to hear you say that because I almost asked about the rain conditions, but I figured you’ve done so much grueling stuff over the years that it’s almost old hat now and blends together.
Oh, no. Especially freezing cold and lying on the cold ground without a mat or anything like that, crawling forever. All while acting Lagertha’s last moment on camera! Everybody wanted to applaud after, because it was my last moment, but I just wanted to be warm. I was like, “OK, thanks. I gotta go. Let’s have another party later.” [Laughs] It was brutal, physical shoot for sure, but on one hand, I’m glad that’s how it ended.

TVLINE | Oh, and the music that was playing throughout, that woman singing of Lagertha…
So, that was specifically written for Lagertha, by this incredible artist. Michael Hirst sent me the song before my death [scene] and if you translate it, it’s really powerful to hear the words. Hopefully a fan will do that, because it’s just so powerful. What a way to go, to have a song written for you and about you. When Michael played it for me, I was in the heat tent just in tears. It was so beautiful. [Ed. Note: The song was composed by Song of the Goat Theatre — one of Europe’s most innovative theatre companies — with Grzegorz Bral as music director, and performed by renowned Polish vocalist/songwriter/ improviser Anna Maria Jopek.]

TVLINE | At the end of the day, what did the Vikings experience mean to you?
Everything. It’s so hard to put into words. Lagertha is such a big part of me.

Filming for seven years in Ireland, being away from your family and your friends, and making a new family there. Being on set and getting a chance to dive in creatively into different scenarios as an actor, learning how to direct…. I’ve had such a growth spurt the last seven years that it’s really made me who I am today as a person, and it’s definitely has been a highlight of my career. I really hope people for years to come will continue to binge-watch and continue to follow Lagertha, in terms of having a role model for years to come.

TVLINE | Along the way, you also played a badass on Person of Interest, you played a badass on Wu Assassins…. What’s next for you? Do you kind of want to do something a little lighter?
Right? I think I’ve done enough killing. [Laughs] I’m happy to say that I have three movies coming out next year. There’s Flag Day with Sean Penn, which he directed and starred in with his daughter Dylan Penn. Josh Brolin’s in it, and Regina King, Miles Teller…. It’s a phenomenal script written by Jez Butterworth. And then I got a chance to work with Liam Neeson on The Minuteman, which is more of an action thriller. And I did Wander, opposite Tommy Lee Jones and Aaron Eckhart, shot by a female director (April Mullen). That’s conspiracy theory thriller.

I also became an investor on two different things — a clothing brand called Vuori, which I’m actually wearing right now. It’s the most comfortable sweats you can possibly live in. The other company that I just invested in is called June Shine. I’ll also continue to look for great projects, and help women with self-defense…. It’s been a busy year, and for [2020] I hope to direct more. I had a big year!