If Chicago Med made you do a double-take on Wednesday, that’s perfectly understandable. The episode featured a guest spot from Chicago Justice vet Joelle Carter, who starred as private investigator Laura Nagel on the short-lived spinoff. But on this week’s Med, Carter played a completely different character: a former patient of Will’s who became a drug addict after he prescribed her opioids.

Co-showrunner Andrew Schneider credits director/executive producer Michael Pressman with bringing Carter back into the #OneChicago universe in a very different way. “[He] had worked extensively with her on Justified and thought she would be great for this, and she was!” Schneider shares. “We made an offer to her, and she accepted it, and that’s how we got her.” 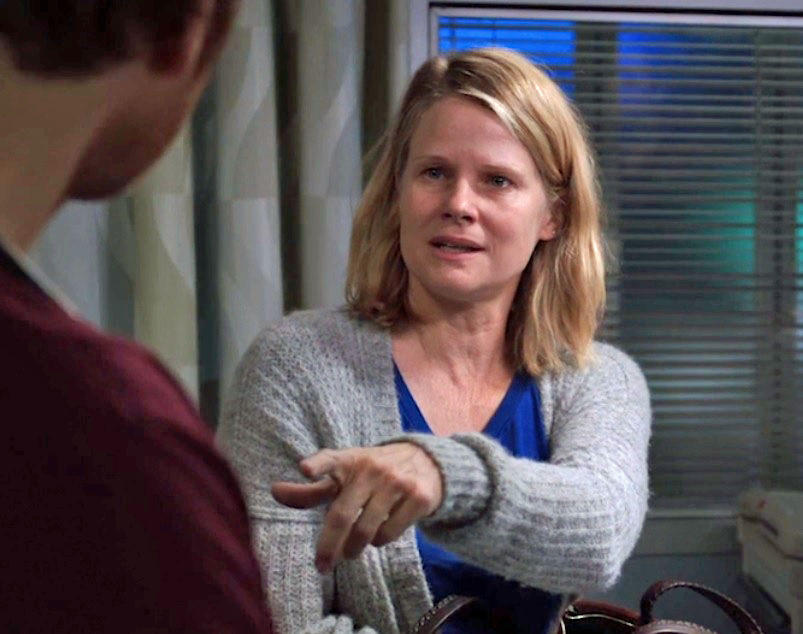 As for concerns that a series regular from Justice, which was cancelled in 2017, would now be playing someone else on a sister show, co-showrunner Diane Frolov says, “We talked about that with Wolf [Entertainment] . We felt, ultimately, there was enough time, and the parts were so very, very different.”

And it helped that Carter physically transformed herself for the harrowing role, which ended with her character’s overdose. “She’s a great actor. This is an actor who can do anything,” Schneider adds.

Elsewhere in the episode, April told Ethan the truth… about not being able to have a baby, but not about kissing Crockett. Still, that didn’t stop her from accepting Ethan’s surprise marriage proposal. April’s secret will continue to eat away at her, Frolov says, “and it’s not just that she didn’t tell him. It’s also that she continues to have these feelings for Crockett that she doesn’t really understand in a way, but they’re there. So it’s not just the lie. It’s also the feelings. But she’s going to work very hard to suppress those things.”

Meanwhile, Crockett and an unsuspecting Ethan will actually “start developing a bit of a friendship,” Schneider reveals.

As for Will’s latest falling out with his ex-fiancée, he “is going to go on his own journey, independent of Natalie,” Schneider previews. “They’re both going on their own trips, away from each other, but particularly, Will has a big continuing storyline” stemming from this week’s episode that involves establishing a safe injection site.

Med fans, what did you think of Carter’s return to #OneChicago and the “Chexton” engagement?