Ever wish you could hear other people’s thoughts? Well, as Zoey Clarke can attest, that power has more drawbacks than you might expect.

Played by Suburgatory’s Jane Levy, Zoey is the introverted coder at the center of Zoey’s Extraordinary Playlist, which made its NBC debut on Tuesday night. (The show will settle into its regular Sundays-at-9 time slot beginning Feb. 16).

In the pilot episode, Zoey reluctantly schedules an MRI for herself after experiencing days of headaches; her father (The O.C.’s Peter Gallagher) suffers from a neurological disease that has left him mostly immobile and unable to speak, and Zoey is just freaked out enough by her stress headaches and eye pain to see a doctor and ensure she’s not sick, too.

But a poorly timed earthquake takes place while Zoey is in the MRI machine, causing the technician’s computer to go berserk and play all kinds of music at once. The ordeal only lasts a few chaotic seconds — but when Zoey leaves the MRI, she can suddenly hear other people’s thoughts, in song.

Understandably, Zoey’s new ability freaks her out at first; there’s nothing calming about hundreds of people breaking into The Beatles’ “Help!” on the streets of San Francisco, after all. Plus, her life is complicated enough without hearing strangers’ inner monologues: In addition to her dad’s health issues and a love-hate relationship with neighbor Mo (Glee‘s Alex Newell), Zoey is in the running for a big promotion at work, but she sorta tanks the interview with intimidating boss Joan (Parenthood’s Lauren Graham). 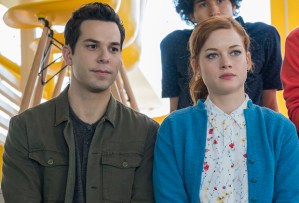 Later, though, Zoey finds she’s able to make emotional connections with others, now that she’s privy to their most vulnerable thoughts. After watching her seemingly happy co-worker Simon (on whom she has a huge crush) sing “Mad World,” Zoey is able to strike up a meaningful conversation with him the next day; she shares that her father is dying of a rare disease, and Simon reveals he’s still struggling with his dad’s recent suicide. The two of them form a fast bond — and although Simon is engaged to a lovely woman named Jessica, he admits that Zoey can relate to his emotional baggage more than his fiancée can.

A few days into her confusing new existence as a mind-reader, Zoey sits next to her dad on the couch and cries to him, sobbing that she doesn’t feel like herself these days and could really use his sage advice. Then, in the episode’s most tearjerking sequence, Zoey gets to hear her dad’s thoughts in song; although he can’t speak or move in real life, he sings Cyndi Lauper’s “True Colors” to her in a wonderful fantasy sequence, swaying with her in a slow dance around the living room while Zoey weeps. (And all of a sudden, the box of Kleenex next to me is completely empty.)

Zoey seems reinvigorated after that father-daughter musical number, and things start looking up. She realizes that her dad is still processing everything that’s happening around him, and she decides to take him sailing for the first time in ages, since he loved the outdoors when he was healthy. Zoey’s mother (The Last Man on Earth’s Mary Steenburgen) and brother join the trip, as well, and her dad sweetly reaches for her mom’s hand while they’re out on the water.

Meanwhile, at work, a newly energized Zoey has a breakthrough and single-handedly identifies a bug that had been messing with one of her company’s newest products. Joan, duly impressed, brings Zoey into her office for a second interview, and Zoey is much more self-assured this time as she describes why she should get that promotion. And get it she does! Zoey is now manager of engineering, and she looks more confident than ever as she struts off the elevator the next day.

Of course, the high doesn’t last too long: Just as Zoey is thanking her coworker and best friend, Max (Crazy Ex-Girlfriend’s Skylar Astin), for calming her work-induced anxieties these last few days, Max suddenly gets quiet… then breaks into a rendition of The Partridge Family’s “I Think I Love You,” which absolutely stuns Zoey. Max might not know that he just revealed his romantic feelings for his BFF — but Zoey sure does!

OK, your turn! How did you feel about Zoey’s premiere? Grade the episode in our poll below, then drop a comment with your full reviews!