Silvio Horta, who created the ABC hit Ugly Betty, was found dead on Tuesday in an apparent suicide, according to our sister site Variety. He was just 45 years old.

Horta died of a self-inflicted gunshot wound, according to sources; his body was found in a Miami hotel room.

“Through his friendships, his love and his work in TV and films, Silvio touched the lives of millions. Silvio had an ongoing struggle with addiction and depression, but through it all, he always found a way to turn his struggle into laughter… He was a kind and beautiful man. He may be gone but his light will shine on.” 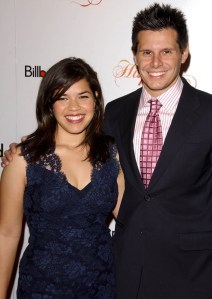 Ugly Betty, which was adapted from the Colombian telenovela Yo soy Betty, la fea, starred America Ferrara (seen at right with Horta) as a stylistically challenged young woman who lands a job at a glossy fashion magazine. The supporting cast included Vanessa Williams, Becki Newton, Michael Urie and Rebecca Romijn; it debuted in 2006 and ran for four seasons, with Horta serving as executive producer and showrunner.