Welcome back, rose lovers! A new year means a new season of The Bachelor, and Monday’s premiere — with Peter the pilot stepping up as leading man — delivered three hours (!) of kisses, tears and airplane puns. Lots and lots of airplane puns.

Right at the start, the premiere flashes forward to the end of the season, with Chris Harrison consoling a devastated Peter as he delivers some bad news — and promising an “unbelievable journey” in the voiceover. A full season trailer shows us a bevy of women throwing themselves at Peter, fighting with each other, crying a whole lot… and then it takes us back again to that unhappy ending. We also get the usual fluffy intro filler: Peter emerges from an airplane hangar like Maverick in Top Gun, with a leather jacket and aviators, and tells us how he’s ready for love again after Hannah broke his heart. (Yeah, more on her in a minute.) Plus, we get sneak peeks at some of the ladies, including Chicago body waxer Alexa; Syracuse tomboy Tammy; Tennessee model Hannah Ann, who looks like a Disney princess; and Chicago attorney Kelley, who already had a run-in with Peter in a hotel lobby months earlier. Hmmm, interesting… 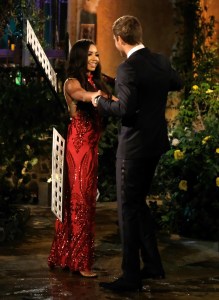 Soon enough, the limos are arriving at the Bachelor mansion, and Peter is there to greet them in a tuxedo and bow tie. Alayah hands him a letter from her Grandma Rose. Hannah Ann immediately catches his eye; she’s clearly an early frontrunner. Eunice thinks she has an advantage because she’s a flight attendant… but then there are two others in the mix! There are plenty of attention-grabbing stunts, too: Georgia nanny Kiarra emerges after being zipped up inside luggage, and Deandra arrives dressed as a windmill and asks him, “Are you ready for Round 5?” One girl even blindfolds him and kisses him — um, not OK! — but the biggest gasp happens when the last limo pulls up and out steps… Hannah Brown!

The girls inside scream bloody murder and freak out, of course (“Is this legal?”), but Hannah’s only there to wish Peter well and give him back the wings he gave her so he can go find his co-pilot. How sweet! (Yeah, stay tuned on that!) Peter joins his ladies inside and assures them that they don’t need to worry about Hannah; he gets to mingling, reading the letter from Alayah’s Grandma Rose and bonding with Hannah Ann over a painting her dad did of the Smoky Mountains. That earns Hannah Ann the first kiss of the season… but that’s soon followed by him locking lips with Tammy and Canadian fashion blogger Mykenna, so maybe she shouldn’t feel all that special.

All the women Peter is not kissing are starting to get antsy: While he’s kissing Mykenna, Natasha is standing right nearby, sipping tea and yelling, “Tick-tock!” (To be fair, Mykenna did interrupt Natasha’s alone time with him, and that is an unforgivable offense on this show.) Hannah Ann also steals more alone time with Peter, and when Shiann pulls her aside and calls her out on it, she just smiles her way through it. (You can’t be mad at her! She’s a Disney princess!) Peter remembers Kelley from their hotel lobby rendezvous and thinks they have a spark, but when he grabs the first impression rose, he makes a beeline for Hannah Ann, and they kiss some more. Boy, he sure likes the name “Hannah,” huh? 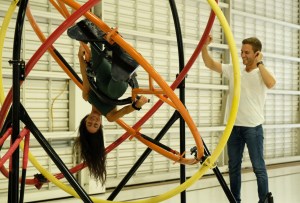 Time for the first rose ceremony: Peter hands out roses to Victoria P., Madison, Kelley, Lexi, Savannah (who?), Lauren, Tammy, Alayah, Jasmine, Sydney, Natasha, Mykenna (OK…), Deandra, Sarah, Alexa the body waxer, Kelsey, Payton, Kiarra, Courtney, Shiann and… Victoria F., who cried all night about not getting enough attention. (Gotta keep that drama going!) But wait: The premiere’s not over yet! We move right into the thick of the action, with a group date for Hannah Ann, Kelley, Deandra, Tammy, Courtney, Shiann, Victoria P., Jasmine and Victoria F., who meet Peter at a nearby airplane hangar. A pair of female pilots put the girls through “flight school,” which means math problems, a rundown of sexy-sounding aviation terms and a spin in the nausea-inducing gyroscope. Poor Victoria P. has a weak tummy — she threw up on the teacups at Disneyland! — but she summons up enough courage to strap into the gyroscope for a few spins. And then promptly pukes in the bathroom.

For the final challenge, the ladies don flight suits to go through a goofy airplane-themed obstacle course, and Kelley emerges as the winner — though she clearly cheated, riding her tricycle straight to the finish line rather than around the cones. Tammy calls her out for cheating, but not only does Kelley still get alone time with Peter, but she also scores the group date rose after she and Peter recreate their fateful hotel lobby meeting, because the producers made sure this date took place in the same dang hotel where they met. (See, kids? Cheaters… actually do win!) But it’s Madison who lands the season’s first one-on-one, accompanying Peter to meet his whole family while his parents renew their vows — wow, no pressure there — before enjoying a romantic dinner together. She confesses she already doesn’t want to share him, but he reassures her he won’t hurt her (hmmm, foreshadowing, perhaps?) before they take in a private performance by someone called Tenille Arts. It’s all sweet, but a little boring. 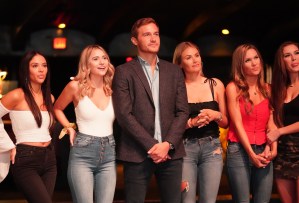 Not boring, however, is the next group date, which brings Lauren, Sydney, Payton, Natasha, Alexa, Kelsey, Mykenna, Alaya and Savannah to an L.A. club where “a very good friend” of Peter’s has set something up for them. Oh hey, it’s Hannah B.! Again! With a windmill behind her! The other ladies aren’t thrilled to see her as she tasks them with sharing a personal story about sex in front of a live audience… after she tells the windmill story again, of course. (Four times! Did you catch that?) While the girls work on writing their stories, though, Hannah tells a producer she still has feelings for Peter (??), and he finds her crying backstage (!!). (Also, it’s her birthday, apparently? Happy birthday, Hannah!) He admits he kind of wanted her to stay on that first night, and she blubbers that she regrets sending him home: “I question it all the time.” He even asks her if she’d consider coming back into the house… and she says “maybe.” He wants her to come back, but he’d feel like a jerk with the other girls — and the episode ends with a big, fat “To Be Continued.” Oof.

Alright, Bachelor Nation, it’s time to weigh in: Grade tonight’s premiere in our poll, tell us whether or not you want to see Hannah come back as a contestant and then hit the comments to share your thoughts on all three hours.