NBC’s Manifest took flight again this Monday night, revealing the outcome of Jared and Zeke’s “gun fight” before dropping a couple of bombshells on Ben.

MAN ON THE RUN | Season 1 left off with Jared lunging at a gun-waving Zeke, and the gents fighting over the firearm before a shot rang out. It turns out that Michaela, who was arriving on the scene at the time, took the wayward bullet. As she bled on the floor after, she urged trigger man Zeke to “run,” which he did. It was touch-and-go for Michaela once at the hospital, but she pulled through surgery — after which, Saanvi told Jared that he was not welcome to see the patient. Instead, Mick is visited by Ben, who looped his sis in on the “death date” situation, and Cal, who like his aunt shared a new “nightmare” in which 828 was in a nosedive. Seated beside Mick during that unreal crisis, Cal urged her to “save the passengers.” But what does that mean?

BABY TALK | Flash forward two months and Ben has been trying to “save the passengers” by scoping out their homes and possible threats (such as a mysterious unmarked van). After checking in with Saanvi, Ben takes Grace for her 14-week sonogram, during which he discovers that she was pregnant while he was “away,” but miscarried. (With Ben and Cal “dead,” she had holes in her life, Grace explained, and Danny always wanted kids….) Speaking of Danny, there is some debate about whether to tell him about Grace’s new pregnancy (for which he could be responsible), but she and Ben agree to hold off for six months or so. Back at the house, they share their news with a joyous Mick, Olive and the rest. Later, though, Grace and Olive bump into Danny, and Grace is conspicuously mum about her pregnancy. Having realized that Danny could be the father, Olive storms off, angry that nothing in their lives is simple anymore. 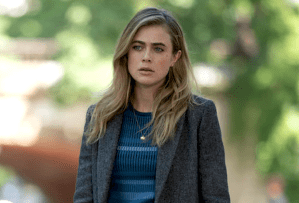 WHAT’S SHAKING? | Returning to the cop shop early, Michaela is met with some side-eye (…and loads more to come next week) by her new boss, Captain Bowers, when she asks that the hunt for Zeke be called off. When Mick gives Jared a very cold shoulder, she explains to her ex that she blames his obsession with Zeke for her getting shot. She then notices two names on the Missing Persons board, Anton and Trina Vasik, that match passengers from Ben’s research — at which point both she and Cal, who is back home, start shaking. Conferring with Ben, and then visiting the Vasik kids who are being watched over by a neighbor lady, the Stones realize that Anton and Trina up and vanished a few nights ago. The neighbor shows Ben and Mick the cellar where the Vasiks had papered the walls with Bible verses, including one about being “cast into the lake of fire.”

SAANVI OVERSHARES | Dr. Ragier (aka The Major) suggests to Saanvi that she has special feelings for Ben, given that all they have been through — a fact that Saanvi unconvincingly disputes. In a later session, Dr. Ragier attests that Saanvi should no longer pay, out of pocket, for her services if she is going to hold back on all of her stressors. Saanvi agrees to go, but turns heel at the doorway to share, “Something happened to us on that plane….”

FAUX, CANADA | Though Zeke seemingly sent Mick a postcard from Canada, Cal (thanks to a new drawing) finds him camped out in his mother’s apartment, sporting a full ol’ beard. Cal insists that Zeke and Mick belong together, but Zeke argues that Mick nearly died because of him. Cal then explains the “death dates,” and how Zeke might not have much time. Later, Michaela bumps into a cleaned-up Zeke, who has called the cops on himself and is ready to surrender, despite her protests. “I wish I met you some other way, some other time,” Zeke says. Michaela grabs him, triggering another shaky calling in which she glimpses a commuter bridge and a yellow Pontiac. That leads her and Ben to an entirely fictional overlook by the George Washington Bridge, where the Vasiks are preparing to drive their car off the cliff.

Ben explains to an anxious Anton that many 828ers are having “callings,” and that they aren’t bad things. Anton hits the gas, but stops short when Mick steps in front of him. Standing there, Mick looks down and notices that a different car had already slid down the cliffside. Inside that car is a family, and the father had fallen asleep at the wheel. The Vasiks’ “calling” saved those people, Ben explains. Arriving on the scene, Captain Bowers is curious about Michaela’s latest “tip,” and her claim that Zeke helped solve this missing persons case.

ALIVE AND KICKING | That night, Ben is taking out the trash when he spies the same white van that was parked outside the Vasik home. Hollering at the vehicles’ unseen inhabitants, Ben starts rapping on the window when someone grabs-and-bags him from behind, then lobs him into the back. When the hood is later lifted and Ben is uncuffed, he is shocked to see that he is sitting across from… Vance! “You’re not the only one who can come back from the dead,” grins the old frenemy.