THE SHOW | Netflix’s YOU

THE PERFORMANCE | Embodying a sympathetic serial killer is no easy feat, yet Penn Badgley has spent the past two seasons of YOU making the process appear effortless. And just as his character, Joe Goldberg, finally met his match this season in the form of a woman named Love, so too has Badgley found the perfect on-screen companion in Love’s portrayer, Victoria Pedretti.

Already on our radar following her breakout role in The Haunting of Hill House, Pedretti commanded our attention and curiosity from Love’s first scene, an impromptu debate with Joe about whether all peaches look like butts. (Editor’s note: They do.) And by the time we reached YOU‘s jaw-dropping season finale, Love revealed herself to have more layers than the wedding cake she whipped up for her friends. It was with a visceral combination of panic and desperation that Love shared her own twisted backstory, resulting in a tour-de-force performance that required every drop of Pedretti’s boundless vulnerability. We can hardly blame Joe for being left speechless.

Speaking of Joe, the entire second season of YOU served as one long reminder of Badgley’s under-appreciated talents. And the finale proved to be a special treat, giving us a little bit of everything we’ve come to love about the complicated character he’s brought to life. From Joe’s complete unraveling in the cage (“I think I broke you…”) to his chilling final monologue, in which he delivered each word like it was cut out from a magazine for a ransom note, Badgley never failed to enthrall us.

Impressive as individuals and unstoppable as a team, Badgley and Pedretti both turned out Emmy Award-worthy performances in YOU‘s season finale. (And that’s a scenario in which we’d proudly root for them.) 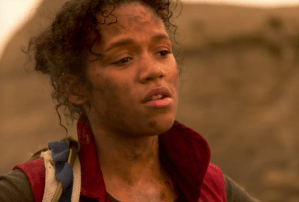 HONORABLE MENTION | We patiently waited for Lost in Space‘s Taylor Russell to get a showcase on par with her on-screen kin, and Season 2, Episode 5 delivered. As Judy raced, via Chariot and then foot, to tend to her gravely wounded father, flashbacks shed light on the duo’s dynamic, from his dispatching of wisdom ahead of her first road trip as a teen, to the icy reception she gave him upon her return, because he “left” her mother. Meanwhile on the planet, Russell dove into a moving monologue about how “great” she would be if Dad selflessly succumbed to his wounds. “I’ll do what I always do — try to keep my family together, because that is my duty,” she said, foretelling the finale to come. “I will hate you for taking another father away from me, for not loving me enough to try harder — because I need you.” So much so that Judy forged ahead, made it to John, and saved his life. 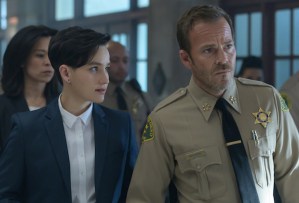 HONORABLE MENTION | Bex Taylor-Klaus first gained our attention with a breakout role as The Killing‘s Bullet, and Fox’s newly launched Deputy is poised to be their most fulfilling, enjoyable role since. As Deputy Brianna Bishop — the sharp-dressed, decidedly contemporary bodyguard/driver for scruffy, old-school Sheriff Hollister (played by Stephen Dorff) — Taylor-Klaus doesn’t visually fit into this gritty world, and yet perfectly does, espousing insightful intel that can only help the new boss navigate the politics of his unexpectedly acquired promotion. But in addition to playing a slick sage, Taylor-Klaus quickly proved that they are more than up to the task of doing all else that comes with the engaging role, from joining in a stealthy stakeout to then saddling up, quite literally, for a guns-ablazing gallop into the bad guys’ lair. It’s fun stuff for a fine actor.