Now that we’ve got your attention, let’s talk about Netflix’s new figure skating drama Spinning Out, which makes The Cutting Edge look like a quaint children’s story.

Set in the resort town of Sun Valley, Idaho, the series stars Kaya Scodelario (Skins, the Maze Runner movies) as Kat Baker, a talented 21-year-old skater whose promising future has been halted by an injury. Kat fell during a jump in competition and hit her head on the ice, splitting it open. The trauma of it has paralyzed her to the point where she keeps popping a simple jump. As a result, she fails her seniors test to become a coach, which means she has to give up skating completely. Kat is so upset that she rushes into the ladies’ changing room and bites her own arm until she draws blood. 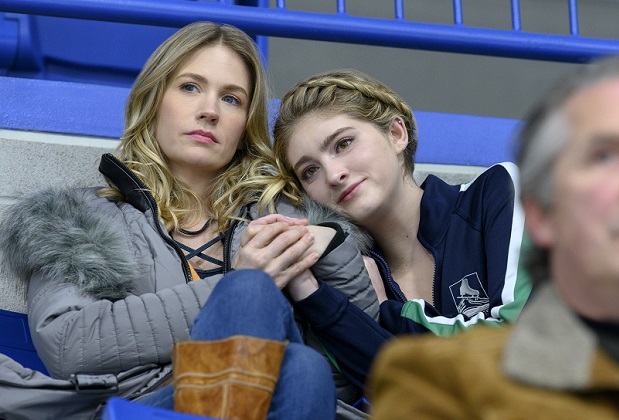 Things aren’t much easier at home with Kat’s snotty half-sister Serena (The Hunger Games‘ Willow Shields), who is a promising soon-to-be seniors skater, and the girls’ bipolar mom Carol (Mad Men‘s January Jones). One minute, Serena is calling Kat for help after Carol goes off her meds and has an episode, and the next, she’s telling Kat that she’s just as messed up and bipolar as Carol. An upset Kat claims that she manages her illness, but the argument is enough to convince her that she should move to London with her college boyfriend.

But there’s another prospect out there for Kat: Justin (Arrow‘s Evan Roderick), the rich, playboy pairs skater whose father (JAG‘s David James Elliott) owns the hotel where Kat works as a waitress with pal Marcus (All American‘s Mitchell Edwards). Justin’s in need of a new partner, and his coach Dasha (The Americans‘ Svetlana Efremova) has her eye on Kat. She recognizes what a beautiful skater Kat is and believes that she can fix her issues on the ice. Dasha asks Kat to give her two years, and in return, she will give Kat nationals. But even though Kat “wanted to be remembered” in the sport, she tells Dasha that she’s not a pairs skater. 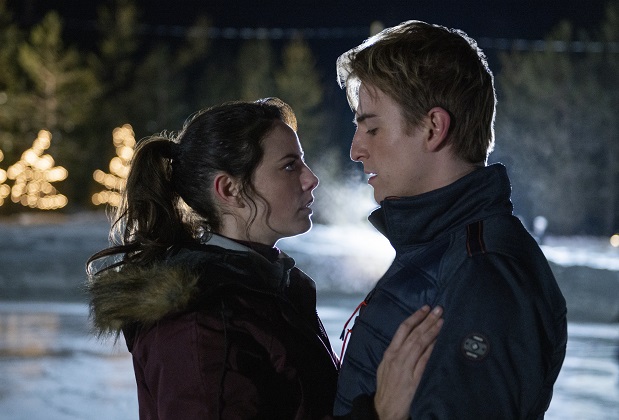 Jenn (Amanda Zhou), a fellow skater nursing a possibly career-ending hip injury, takes her BFF Kat out to a swanky club to get their minds off their crummy days. She, too, urges Kat not to give up on her talent and pass up an opportunity. Outside the club, Justin — who paid for the bottle service so that Jenn would talk to Kat — runs into his would-be partner. He tells her that, despite what everyone thinks, he really does care about skating and thinks they would work well together. Kat is having none of it and goes home, only to be met with an upset Carol. Word got back to her that Kat threatened Serena’s fancy new coach Mitch (Reign‘s Will Kemp) at the club. Kat explains that she doesn’t trust the way Mitch acts around Serena, which leads to a blowout fight.

“We’re the same,” Carol says to Kat. “Always tripping at the finish line.”

Kat exclaims that she’ll never be like Carol, because she’ll never be a terrible mother who can’t hold down a job and only picks losers. Carol counters that Kat can’t stand to let Serena have a turn in the spotlight. It’s all very nasty and ends with Kat packing up her stuff and throwing her skates out the car window. In the morning, however, she has a change of heart and drives back to dig her skates out of the snow. But does she still have a chance at teaming up with Justin? As the episode ends, he discovers that the girl he flirted with the previous night is his new partner Leah (Shadowhunters‘ Kaitlyn Leeb).

I wish I could tell you that the show/Baker family drama becomes less melodramatic as the season progresses, but on the bright side, Justin becomes a far more interesting character than the premiere would lead you to believe he is. And his coach Dasha and stepmother Mandy (Parks and Recreation‘s Sarah Wright Olsen) have some lovely storylines.

What did you think of the debut of Spinning Out? Grade it below, then hit the comments!