Last Man Standing won’t shy away from hot-button issues in 2020.

As it enters its eighth season (its second on Fox), the Tim Allen comedy will delve into politics and religion in ways that it has not done before — and in ways that have the potential to permanently alter dynamics within the Baxter family.

Ahead of the double-episode premiere (Thursday at 8/7c), TVLine spoke with executive producer Kevin Abbott and series star Molly McCook (aka Mandy No. 2) about what’s coming up in the new year.

MIKE & VANESSA | Mr. and Mrs. Baxter will enter a new phase of their lives as empty-nesters. “It kind of changes everything,” Abbott tells TVLine. “We play on the fact that there are no longer any children in the house throughout the first 10 or 11 episodes.” The premiere is “ultimately about a lack of communication brought on by physical distance,” and Mike’s efforts to remedy that distance to appease Vanessa. 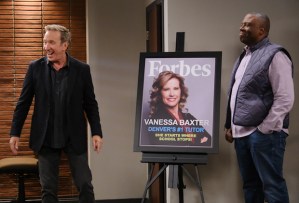 Episode 2 will beget a larger discussion about how Mike and Vanessa plan to spend their free time: “If part of your purpose every day is taking care of these people in the house, and that responsibility goes away, how do you react to that? Is it freeing, or is it somehow a loss?” Rather than sit around and twiddle his thumbs, Mike decides to go into business with Chuck — but their plan to open a classic car renovation service crashes when Joe (recurring guest star Jay Leno) is invited to join in. “There’s a fun little story that spins out from that,” Abbott says.

While Mike fixes cars, Vanessa will take stock of her own booming business. “She discovers that her tutoring business is thriving because the educational system is failing… and she decides to run for [State Assembly],” Abbott reveals. “We always talk a little bit about politics on the show, so it’s a way for us to introduce some subject matter without being too partisan and too issue-oriented.”

KRISTIN & RYAN | In the premiere, Mike invites Kristin, Mandy and Eve over for dinner, where Kristin reveals that — Spoiler alert! — she’s pregnant. The storyline was dictated by portrayer Amanda Fuller’s real-life pregnancy, and Abbott’s desire not to try and write around it. “I’ve been on enough shows where you try to hide it, and it really doesn’t work too well,” he says. (Fuller gave birth to her first child in November.) 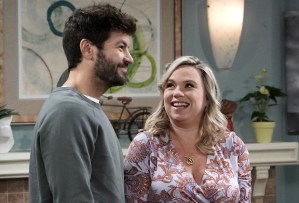 Another episode will find “Kristin and the entire family delighting in the fact that this time around, they actually get to walk into church and say, ‘Hey, we’re pregnant!’ because she’s married and she’s got a career, as opposed to the first time [when she was a teenager and had Boyd out of wedlock],” Abbott says. And unlike her first pregnancy, Ryan is actively involved, which the EP says “absolutely comes into play” — the idea of “what it’s like this time versus what it was like last time” Kristin was having a baby, “and just how different it is — both in good and bad ways.”

MANDY & KYLE | While Mike and Vanessa are ecstatic for Kristin and Ryan, Mandy has mixed feelings about her sister’s pregnancy. “She’s dealing with a little bit of jealousy and a little bit of FOMO,” McCook tells TVLine. “Last season, we found out that Mandy and Kyle were having some ‘technical issues’ with trying to get pregnant… She’s happy for Kristin, but she’s hoping for kids herself, and it seems like her sister is having no trouble popping out babies.”

While Mandy and Kyle’s family planning will factor into Season 8, their careers also will play a big role this year. “Mandy is now fully working at Outdoor Man with everyone,” McCook says. “It’s fun to see her in that environment because she doesn’t quite fit in, but she’s putting her ‘Mandy sparkle’ on everything that she’s doing,” including her new athleisure line.

As for Kyle, he’ll be considering a major life change, which was first hinted at in Season 7. “We have him contemplating going into ministry,” Abbott reveals. “He’s a religious character, which you don’t really see a lot of on TV. We’ve always referred to him as a ‘pure character’ and a ‘pure spirit,’ and we kind of like that notion of him seeing if there’s a calling to do more with his life.” Should he go that route, the series will explore the impact that has on Mandy, and whether she’s fully on board with her husband’s divine decision. “She always worries when Kyle tells her about some change or some new idea that she’s not one-hundred percent [on board] with,” McCook adds, “but she always trusts him and only wants him to be happy.”

Last Man Standing Season 8 will kick off with three weeks of back-to-back originals, beginning Thursday, Jan. 2 at 8/7c, on Fox. Watch an exclusive sneak peek below, then hit the comments with your reactions.