“There’s something dangerous about the boredom of teenage girls.”

That line of voiceover during the opening minutes of USA Network’s edgy teen mystery drama Dare Me perfectly sums up the atmosphere of Sunday’s series premiere.

Adapted from the book of the same name by executive producer/writer Megan Abbott, the show is set in the world of a small-town high school cheerleading team, which is rocked by the arrival of new coach Colette French (Scream: The TV Series‘ Willa Fitzgerald). It’s her words above, as recounted by cheerleader Addy (The Get Down‘s Herizen Guardiola), that set the tone for the darkness to follow. As Addy’s voiceover tells us, the coach could see past the young girls’ glittery exteriors to the miseries beneath the surface. But most of all, “she could see that we were waiting, had always been waiting, for her. It was f–king beautiful… until it went too far,” Addy’s VO declares as we see her driving, her hands and phone covered in blood. 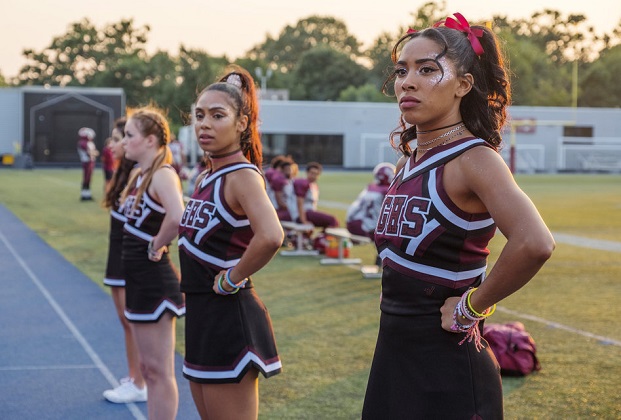 Cue to three months earlier: Addy and her best friend, the team’s alpha captain Beth (Home and Away‘s Marlo Kelly), are discussing the upcoming arrival of their new coach. Beth’s not about to give up her team to some “ancient” 28-year-old who had to move back home. But Addy sees Colette, who’s had success as a competitive cheerleading coach, as a way out of her nothing hometown.

Colette immediately starts shaking things up within the team, putting the girls through their paces and pointing out their flaws, sometimes almost callously, like when she pinches a girl’s midsection and tells her to fix it. She also removes Beth from her position as the top pyramid girl, replacing her with her younger half-sister Tacy (Girlfriends’ Guide to Divorce‘s Alison Thornton). (Beth’s dad lives across the street with his new wife and Tacy, so Beth is extra mean to her sis, grasping her thigh so tightly that she almost topples over during the pyramid.) 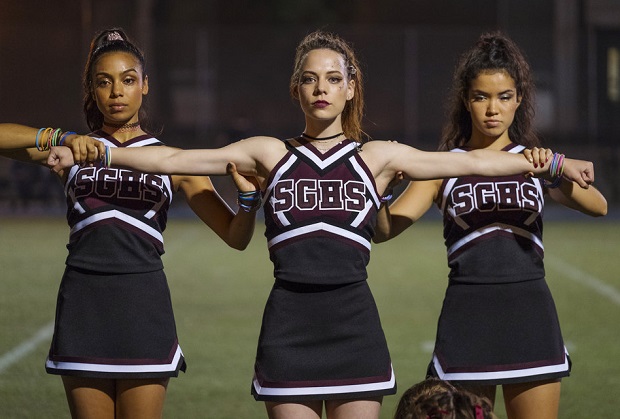 Meanwhile, Addy seems to be distancing herself from Beth, causing the latter to lash out and fire off a gun while partying in the woods. (When this goes down, someone is going down on Addy, to give you a sense of how these kids are spending their free time.) Addy calms Beth, and while the two are later huddled in bed, Beth worries that “everything’s changing,” including her BFF.

Then Beth remembers that she left her phone back in the woods, so the girls go searching for it… and discover Colette having sex with the school’s Marine recruiter Sarge Will (The Vampire Diaries‘ Zach Roerig). This might not seem like a big deal since everyone is of age, but Colette is married to Matt (Imposters‘ Rob Heaps). Beth giddily videos Colette and Sarge Will in the act, while Addy exclaims to her friend that they’re not going to say anything.

“Coach told me something once. She said someday you’re going to really want something,” Addy’s voiceover recalls as the girls run through the woods. “That’s when you’ll find out who you are. But there’s a price for everything. You have to give up the old things, the things that feel easy, the things that feel safe. This is how you become strong. This is how you become a woman.”

“In the end, I couldn’t stop it. Any of it,” Addy concludes ominously.

What did you think of the Dare Me series premiere? Grade it below, then hit the comments!