The Mandalorian this Friday concluded its freshman run with a resolution to the standoff with Moff Gideon, while springing several big reveals along the way.

First, we eavesdropped on the two scout troopers (played by SNL alum Jason Sudekis and Happy Endings‘ Adam Pally) who last week killed Kuiil and snatched the Child, on behalf of Moff Gideon. Warned that things were a bit tense back in town — Gideon had one of his men executed for interrupting him?! — the troopers kicked back for a bit on the outskirts, casually bantering about (and occasionally swatting, the heathens!) the Child, and generally sucking at target practice. Just as one trooper got nipped by the Child, IG-11 showed up to introduce itself as a nurse droid and demand the immediate turnover of the asset. When the troopers resisted, IG-11 KO’d one and smashed the other’s head against its speeder, again and again, before speeding off with the Child on the other bike.

Meanwhile in town, Mando had the idea to escape the surrounded cantina via the sewer, though the access grate available to them was firmly welded shut. Gideon then brought out the literally big gun — an E-Web heavy repeating blaster cannon — and reminded both Cara Dune (of Alderaan!) and “Din Djarin” (Mando’s name, if you hadn’t read it online before) of their uniquely personal past experiences with the weapon. But rather than truly threaten Mando & Co. with the E-Web… Gideon gave them until nightfall to surrender to his terms. In that lull, Mando shared with the others that their adversary is named Moff Gideon, and he knows that because Gideon was an ISB officer during the purge on Mandalore, though he was believed to be have been executed for war crimes. Mando explained to the others that he himself was not born on Mandalore, but raised in that creed by the Mandalorians who swooped into his village after the attack, rescuing him from the root cellar.

Mando/Din tried again to hail Kuill, only to learn from IG-11 that their Ugnaught friend has been terminated, sending the reprogrammed droid into nurse-and-protect mode. IG-11 thus stormed the town gates on the speeder bike, guns a-blazing and swiveling when needed to keep the handlebar-riding Child out of harm’s way. With Gideon’s forces thusly distracted, Mando dashed outside to join in the firefight, seizing the E-Web at one point to mow down lotsa  troopers. Gideon, though, calmly entered the mix, first pinging Mando on his helmet with blaster fire, before next shooting the E-Web’s power generator, triggering an explosion that “rang Mando’s bell.” As Gideon ordered flametroopers to “burn them out” of hiding, Cara lugged Mando back inside, where it was revealed that his head is bleeding — but he refused to let her remove his helmet to tend to the wound. Rather, he charged Cara with protecting the Child/getting it to his Mandalorian brethren, while letting him die a warrior’s death. “I won’t leave you,” Cara said. “This is the way,” Mando argued, insisting on being left behind with IG-11. Before Cara and Greef escaped through the opened grate, troopers barged in to fill the cantina with flame… which the Child used Force magic to repel and shoot right back at them!

Now alone, Mando explained to IG-11 that no living thing has seen him without his helmet since childhood — and the droid noted that he is in fact no living thing. And so he removed the helmet, and we saw Mando’s face for the first time. We even got a half of a hint of a grin, when he failed to pick up on IG-11’s joke about his “central processing unit” being damaged. IG-11 treated Mando’s wound, after which they caught up with the others underground. But upon arriving at the Mandalorians’ covert hiding place, all they found was a pile of helmets and armor… and the Armorer. She explained that after the Mandalorians revealed themselves to save Din earlier in the season, the Imperials swooped in — and while some of their people escaped, she otherwise has been “salvaging what remains.” Upon meeting the Child and hearing of its powers, the Armorer spoke of fabled battles between Mandalore and “an order of sorcerers called Jedi.” And while the Jedi were natural enemies of the Mandalorians, the Child obviously is not. This “foundling,” though, is too weak for Mando to train, so Din’s mission as an ersatz father is to reunite it with its own kind, whomever/wherever they may be. The Armorer also bestowed on Din his well-earned “Clan of Two” signet, as well as a jetpack that he is not to fidget with until he has healed.

After sending the others on their way, the Armorer stayed behind to give a good half-dozen arriving troopers a beatdown. Mando & Co. made it to a lava river running beneath the town, boarding a ferry manned by a semi-fried droid. Soon enough, Mando gleaned that the mouth of the tunnel they had in their sighs was flanked by troopers. IG-11 then announced that since there is no scenario where he keeps the Child safe and lives, his base command is to self-destruct. So, he disembarked mid-stream, waded through the lava to the end of the tunnel, greeted the troopers and self-destructed, blowing them to smithereens. When the boat itself emerged, Gideon’s TIE fighter approached from the horizon, laying down fire. Mando in turn fired up the jetpack and hooked himself onto the TIE fighter. He then attached explosive charges before leaping off, zig-zagging down to the ground (still new to the jetpack thing!) as one of the fighter’s wings blew up, sending the ship spiraling into a crash.

In the aftermath, Greef invited Cara to hang around and perhaps do some work for him, while Mando of course has a standing invitation to return to Navarro — and the guild’s welcoming arms. Mando, though, said he has more “pressing matters” to tend to, involving the Child.

“Take care of this little one,” Cara said of the Child. To which Greef added (in a real ABC Afterschool Special Moment), “Or maybe it will take care of you.” 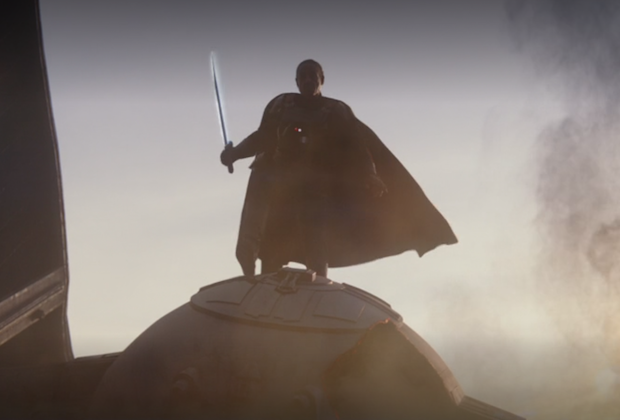 Later, we saw Mando regard a proper grave he dug for Kuill, before he noticed that the Child had been toying with the Mandalore necklace he gave Cara earlier. Once they jetted off in the Razor Crest, we cut to the TIE fighter’s crash site, where Jawas are excitedly foraging for scraps… until the Darksaber — created long ago by Tarre Vizsla, the first Mandalorian Jedi — sawed a hole from inside the cockpit. Moff Gideon emerged holding it, looking mighty miffed.

What did you think of the already renewed Mandalorian‘s Season 1 finale and its many reveals?