Mr. Robot wrote its last line of code with a mind-bending two-hour series finale that had us questioning: What is reality, anyway? (And who is Elliot Alderson?)

Sunday’s finale opens with the original, hoodie-wearing Elliot — let’s call him Old Elliot — narrating to us again, as we see what happened to him after that incident with Whiterose at the nuclear power plant. He wakes up lying on the ground as the earth trembles, and the power plant has vanished, like it never existed. Washington Township is now a thriving suburban utopia, not a hollowed-out ghost town, and his dad is alive and happily running the Mr. Robot computer repair shop. Did Whiterose’s machine actually work? Are we now in an alternate, better timeline?

Elliot follows his dad to his childhood home, where he still lives with Elliot’s mom. (A neighborhood girl recognizes Elliot… but she’s never heard of Darlene.) His mom spots him and invites him in; she’s suspiciously cheerful, and when Elliot tries to enter his childhood bedroom, it’s just a closet. His mom has no memory of him ever falling out of a window, and reminds him that he’s getting married to Angela tomorrow. Elliot rushes into the city, and at Angela’s door, he’s greeted by… Phillip Price! He’s just a jokey father-in-law in this reality, and Angela’s mom is alive, too, proudly showing Elliot a photo collage Angela made of their life together. (A life Elliot doesn’t recognize.) Things get weirder when Angela’s mom gets a call from — Elliot?! When Old Elliot grabs the phone, he hears the new and improved Elliot’s voice and quickly hangs up. Another huge tremor hits, and Elliot quickly sprints out of there to go confront his alternate self. 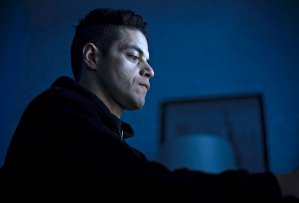 He enters his old apartment — his key still works, of course — and snoops around New Elliot’s nicely furnished digs. His old CD case full of hacked data now just has family photos in it, and New Elliot’s social media posts reveal a normal guy with lots of friends and “no crippling social anxiety.” He does find a hidden folder on New Elliot’s computer: a set of drawings that’s like a comic-book rendition of the whole Mr. Robot story, with a hoodie-wearing Elliot, Darlene and fsociety. When New Elliot walks in, Old Elliot asks about the drawings, and New Elliot explains they’re just a story he made up to fight off boredom: “Sometimes I fantasize about being him.” So the Elliot we know is just a figment of the real Elliot’s imagination? Whoa, trippy.

New Elliot says he doesn’t actually want to be Old Elliot, though: “He’s not normal.” (He hears Old Elliot’s narration, too!) Just then, another quake hits, and New Elliot is knocked to the ground, his head bleeding badly. His phone rings, and Old Elliot answers it: It’s Angela, who fights through Elliot’s protests and tells him, “You finally have to let yourself be happy.” So as New Elliot pleads for an ambulance, Old Elliot doesn’t budge. “But I’ll lose her,” he coldly tells his other self. “And I can’t lose her again.” Instead, he cuts off New Elliot’s air supply (!), suffocating him to death. The deed done, his hands covered in blood, Elliot grimly tells us: “Both of us can’t exist in this world. I had no other choice.” Oof.

Old Elliot goes into “full wipedown” mode, showering the blood off and scrubbing up the crime scene. He picks up New Elliot’s Cadillac SUV and stuffs the poor guy’s corpse into a shipping box before getting dressed in his tux. He’s getting married, remember? But then Mr. Robot reappears, telling him he can’t just step into New Elliot’s life. (“I’m not letting you steal this from me,” Elliot insists, and Mr. Robot replies: “Just who, exactly, do you think the thief is here?”) Elliot tries to shove the corpse-laden box into the SUV, but he’s stopped by… Dom, who’s now a NYPD cop! She gives him a parking ticket and, when she looks at Elliot’s ID, she’s puzzled: “This person looks nothing like you.” She notices blood trickling out of the box and pulls out her gun, ordering Elliot to freeze, but another tremor hits and Elliot flees, hopping onto the subway — and he’s alone with Mr. Robot again. 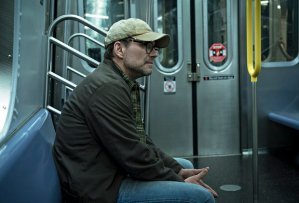 Elliot screams that Mr. Robot is just trying to prevent Elliot from being happy, and he wants him out of his life for good, but when he arrives at Coney Island for his wedding to Angela, the guests are all people in fsociety masks. Mr. Robot puts a black hoodie over his tux and breaks the news: Angela isn’t coming. Whiterose’s machine didn’t work. (Elliot’s game deactivated it.) This happy hallucination is all just “a world you created… to keep him occupied.” To keep who occupied? The real Elliot Alderson. The Elliot we know is stunned: “If I’m not Elliot, who the f–k am I?” Mr. Robot tells him, “You already know,” and when Elliot chases down Angela in a bridal gown to fsociety’s old lair, she tells him: “You’re not Elliot. You’re the mastermind.” Um, what’s that now?

The screen glitches out, and Elliot runs through the boardwalk, seeing Mr. Robot’s face on everyone he meets and finally catching up with Tyrell, who pulls out a gun and shoots him. We hear Darlene’s voice pleading with Elliot to wake up… and suddenly, he’s sitting in Krista’s office. She’s not really Krista, she explains: “We’ve been trying to show you the truth, and you’ve been resisting.” Elliot just wants his life back, but Krista tells him that’s not possible. She lays it all out: Elliot has dissociative identity disorder, and created a bunch of alternate personalities to cope with life. Mr. Robot, Elliot’s mother, his younger self, even us, “the voyeurs”… and the vigilante hacker we know as Elliot. He’s just a shard of the real Elliot’s personality, and he’s been trying to take over. Elliot doesn’t want to give up control, just as another tremor rocks the room and the ceiling caves in on him.

He wakes up in a hospital bed, with Darlene sleeping nearby in a chair. (A TV news report says Zhang/Whiterose was found dead, and a nuclear meltdown was narrowly averted.) Darlene grabs Elliot’s hand and explains that Elliot prevented the meltdown: “You saved the world, Elliot Alderson.” He panics that none of this is real, but she assures him it is: the hacks, fsociety, all of it. He tells her he’s not the real Elliot… and she already knows. He’s not the Elliot she knew growing up, and she misses that Elliot. He assures her he loves her and gazes off as we fade to white. He says goodbye to his alternate personalities — “We’ll always be a part of you, kiddo,” Mr. Robot tells him — and walks down a long hallway to face a red door, which he opens.

Inside is a movie theater, and Elliot sits down next to the other alternate personalities and watches what’s being projected on screen, his eyes welling with tears. The projector light transforms into a cascading tunnel of images from Elliot’s life, and then transforms into a human eye. The real Elliot’s eye. Finally, we hear Darlene say: “Hello, Elliot.”

Alright, Mr. Robot fans, it’s time to log on: Give the series finale a grade in our poll below, and then hit the comments to share your thoughts.