The following contains spoilers from both The Mandalorian Episode 7 (which Disney+ released on Dec. 18) and the newly released motion picture Star Wars: The Rise of Skywalker.

Some who watched The Mandalorian‘s penultimate Season 1 episode this week may have raised an eyebrow when the Child (aka “Baby Yoda”) employed the Force in a new and exciting way — “new,” at least, for those who have only consumed live-action Star Wars fare.

And interestingly, the same use of the Force turned up in the brand-new Star Wars film — Episode IX, The Rise of Skywalker.

On The Mandalorian, whilst camping out before approaching the town on Navarro, Mando & Co. were attacked by a flock of pterosaurs. Mando, Cara Dune and Greef Cargan’s hired guns did their best to fend off the reptilian menances, but not before Greef was gravely wounded. Greef reckoned himself a goner as the talons’ poison began coursing through his veins, until the Child sidled on up and casually laid one of his itty bitty hands on the wound. After accepting that the odd creature was not trying to eat him, Greef looked on in wonder as his wound closed up and healed. The Child, in turn, plopped down on the ground following the good deed, apparently spent by the process.

While using the Force to heal is new to live-action Star Wars properties, it has been employed in a few of the EU/”Extended Universe” novels that in recent years were admittedly deemed to no longer be any kind of canon. (I myself once dabbled in the novels — e.g. Splinter of the Mind’s Eye, Heir to the Empire — during that lonnnnng stretch between the first and second trilogies, hungry for any Star Wars content.) Force healing also apparently is a thing in some Star Wars video games, though I’m still struggling to fly a TIE fighter in Battlefront II. 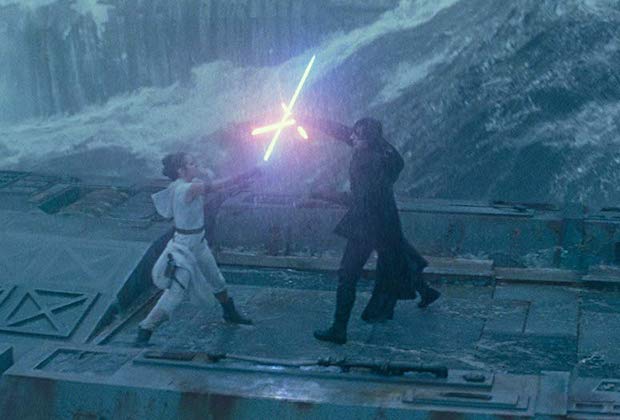 Cut to Rise of Skywalker hitting theaters earlier this week. (Again, massive spoilers ahead! I have spoken!) Mandalorian viewers may have felt a bit “in the know” compared to those who haven’t kept up with the streaming series, when the Force was used in the same way — first, in the caverns of Pasaana, where Rey healed a grisly wound on a giant subterranean serpent and thus earned its fealty. Later, about two-third of the way into the film, Rey again used the healing power to close up the lightsaber hole she herself had just put into Kylo Ren, upon realizing that the “Ben” in him had been nudged forth, with remote help from his mother Leia.

Last but not least, for the real kicker, it appeared that Ben returned the favor in the movie’s final act, when his embrace of a lifeless Rey brought her back to life — though at the cost of any life force left in him, in the wake a brutal battle with the Knights of Ren and his tumble into a deep chasm.

If you’re a Mandalorian viewer who also has made your way to the Cineplex, were you pleased to see the Child and Rey both use the Force in this new-ish way? Did you possibly suspect it?