THE PERFORMANCE | Breaking Morning Show news: Aniston is an absolute revelation as embattled co-anchor Alex Levy. We knew the Friends all-star had comedy chops to spare. And courtesy of her indie film work (see: The Good Girl, Cake), she’s proven herself to be no dramatic slouch either. But the Apple TV+ series has afforded the A-list actress the rare opportunity to regularly play comedy and drama (and even camp) simultaneously and, at times, unsympathetically. And she has more than risen to the occasion. Truthfully, we didn’t know she had it in her. But after watching this week’s Morning Show finale, our skepticism has officially given way to conviction. Aniston is the real deal.

The artist formerly known as Rachel Green has several standout moments in the Kerry Ehrin-penned closer, but for the purposes of this accolade we’re going all in on Alex’s climactic curbside meltdown. During the rousing two-minute sequence, the AM news personality was all over the emotional map and Aniston nailed each varying beat with seeming ease.

First, she captured Alex’s desperation when she, upon hitting the street, put her pride aside and begged frenemy Bradley (Reese Witherspoon) not to abandon her during the day’s telecast, going so far as to cop to both her own “asshole” behavior and brazen hypocrisy. “Bradley, I can’t do this; I need you to get me through today,” she appealed to her co-worker while chasing her down the street, Aniston’s voice quivering and her body language brimming with panicked desperation. “I just need you for today.”

Next, Alex veered into unhinged territory when a passerby snapped a selfie without her consent. It was a straw-that-broke-the-camel’s-back moment for the character, and Aniston could not have been more emotionally and physically committed to the mental, expletive-laced spiral. “F-ck off, I said no!” she screamed, while wrestling away the passerby’s camera. “What do you think — you own me? You think I’m available to you 24/7 because I’m in your living room every morning trying to make you feel better about this miserable world? Well I’m not?!”

Bradley quickly talked Alex off the edge, allowing Aniston to show off her signature comic timing. “Here’s your f-cking phone, sir,” she barked at the “piece of sh-t” fan, Aniston hilariously offering up a heady mix of politeness and disdain while also cementing her alter ego’s status as an utter basket case. Here’s hoping Aniston rides this immensely entertaining train wreck for years to come. 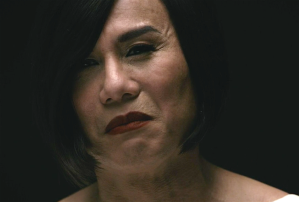 HONORABLE MENTION | With Mr. Robot hurtling towards its series finale, BD Wong gave manipulative arch villain Whiterose a gorgeous swan song this week, as she sat across from Elliot in a riveting final showdown. When Elliot accused her of hating the world and everyone in it, Whiterose giggled uncontrollably before launching into a sprawling monologue about how she was actually trying to save the world, and Wong was spellbinding as Whiterose fiercely defended herself and her actions, her face pulsing with self-righteous rage. In Wong and Rami Malek’s hands, a simple scene with two people just talking in a room became as compelling as any high-octane action sequence, and Wong masterfully added one last layer of nuance to an utterly fascinating character. 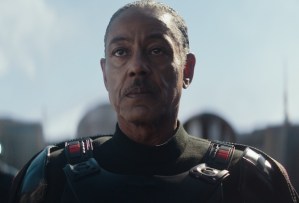 HONORABLE MENTION | For nearly seven full episodes, Disney Plus’ The Mandalorian had us wondering who was “the man behind the man” aka he to whom the Client answers. But given the high value placed on the asset known as the Child, you had to figure the unseen entity was a force to be reckoned with. And with his dramatic entrance and first spoken words — “You have something that belongs to me” — Giancarlo Esposito made clear that Moff Gideon means business. Fitting the Star Wars universe like a glove, Esposito injected his first scene with plenty of authority (emerging from a TIE fighter will do that!) and just the right hint of menace, as he taunted Mando with the suggestion that he has no idea of what he has been in possession. Mando is clearly not done with Gideon yet (and vice versa), but Esposito made his mark from go.