Henry Cavill trades his cape for a sword in Netflix’s The Witcher, whose eight-episode first season is now available to stream. Based on the fantasy novels by Polish author Andrzej Sapkowski, it spins an epic tale of swords, sorcery and close-up butt shots — and that’s just in the first hour!

We’re introduced to the titular witcher — a white-haired mountain of a specimen — in his natural habitat, the forest, where he’s locked in a battle to the death with a giant spider creature. It’s all very heroic. And when the beast is finally vanquished, our hero discovers a wounded baby deer, which he promptly puts out of its misery. Also heroic!

Despite his abundant heroism, however, the witcher doesn’t exactly have the best reputation about town. In fact, when he arrives at a local pub to sell his newly acquired monster carcass, he’s greeted by a hearty, “You mutant son of a bitch.” It iisn’t a cool thing to say to anyone, much less someone of Geralt’s size, beauty and… did I mention heroism?

Fortunately, not everyone in town is opposed to mingling with Geralt. One nice lady offers him breakfast, which is not code for sex, although they do fool around in the woods later in the episode. (Don’t worry, I’ll get to that.) He also befriends Marilka, a precocious Shirley Temple type. You know, if Shirley Temple went around town bragging about her ability to kill small animals with a fork. 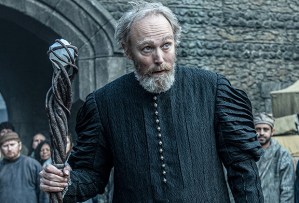 Geralt’s tiny new friend directs him to a local wizard who might be able to pay him for an odd job — emphasis on “odd.” This particular sorcerer, a robed gentleman named Stregobor, lives in a magical garden tower full of hot, naked people. (Under different circumstances, the guy could probably be a lot of fun.) He asks Geralt to murder Renfri, a cursed princess born under the dreaded “black sun,” one whom he believes is trying to have him killed. But like most of Cavill’s characters, Geralt doesn’t believe in killing humans (for the most part), so he declines Stregobor’s offer.

As fate would have it, though, Geralt already knows Renfri — she’s the kind young woman who offered him breakfast back at the pub! But when they meet again in the forest, it’s not to exchange pleasantries. She explains that the sorcerer left out a few crucial parts of his story, including the atrocities his men inflicted upon her. She agrees to leave town in exchange for Geralt sparing her life, but not before getting down to business by the fireside.

Upon realizing that Renfri still intends to murder the sorcerer, Geralt returns to town the next morning, where he’s greeted by a horde of angry men. Casting his principles to the wind, Geralt makes quick work of these goons, stabbing and breaking whatever needs to be stabbed and broken in the process. This leads to a one-on-one battle with Renfri, and while Geralt’s victory comes as no surprise, Renfri’s last words give him pause: “The girl in the woods will be with you always. She is your destiny.”

Meanwhile, an even more tragic tale unfolds in the kingdom of Cintra, which is under siege by the ruthless Nilfgaardian Empire. Accepting their defeat, the royals all drink poison as the enemy breaks through their gates. But one member of the family, a young princess named Cirila, is escorted to safety. “Find Geralt of Rivia,” she’s told. “He is your destiny.” (Gee, where have we heard that before?)

Did you enjoy your first outing with The Witcher? Will you continue the binge? Grade the premiere below, then drop a comment with your full review.