The following recap, by the very definition of the word “recap,” contains spoilers from Episode 7 of The Mandalorian, which released early on Wednesday.

Disney Plus’ The Mandalorian delivered an action-packed lead-up to its season finale, with returning faces, a nighttime assault, “more than four” stormtroopers and one gasp-worthy cliffhanger.

With the Child fast asleep, Mando cued up a holo-message from Greef, who reported that he is “alive, too” — and that “a lot has happened” since Mando fled Navarro. The Client not only still looms, but with him has comes increased ranks of ex-Imperial guards. Greef proposes a solution to Navarro’s increasingly militant state: Mando swings by, baits the Client with the returned Child, but then kills the bigwig once he is close enough. Mando is rightly skittish, about allying with Greef among other things, but he is swayed by the notion of taking 1) down the Client, 2) keeping the Child, and 3) having his name cleared among the guild. It almost seems too good to be true, right?

Mando will need assorted kinds of backup, though, so his first stop is Sorga, where he finds Cara Dune slugging it out with a Zabrak to whom she is tethered by a laser “rope.” Cara emerges victorious by choking out her opponent with the rope, and then collects on many wagers. Mando lays out his plan with regards to the Client on Navarro, but Cara isn’t interested in playing soldier again and would prefer to lay low. But when Mando notes that the Client is Imperial — almost a la Luke enticing Han with, “She’s rich” — “I’m in,” Cara quickly responds. Together aboard the Razor Crest, Mando and Cara further discuss the plan and the stakes, while we see the Child 100-percent adorably eavesdrop from above. The kid apparently didn’t like what he heard, because moments later the ship begins careening, and Mando races to the cockpit to find the Child manhandling the control sticks. Pulling the creature aside, Mando and Cara agree that they must find someone to mind the unpredictable quarry.

Next stop: Arvala-7, where Mando reunites with Kuiil… and is startled to learn that his Ugnaught friend found and reprogrammed IG-11 to be more of a manservant, less a killy droid. Mando has many reservations about this droid in particular (given the nature/outcome of their previous “team-up”), but Kuiil assures that it can serve as a protector. Kuiil thus joins the mission, bringing along not one but three Blurrgs. With everyone/thing aboard the Razor Crest, the Child witnesses Mando grappling with Cara in a friendly arm-wrestling match. Perhaps sensing something different was at play, the Child uses the Force to choke Cara, alarming evvvverybody. Though still uncertain what species of creature this is, its ability prompts Kuiil to note that he has “heard stories….” But rather than get into them with us, he moves on to fashion a snazzy new carrier for the Child, ahead of their landing. 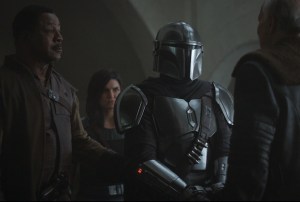 Touching down in a remote, lava-speckled sector of Navarro, Mando & Co. are greeted by Greef and three guild hunters. Greef is bothered by the presence of Cara the “dropper,” but goes along with it provided she cover up her “stripes”/Alliance tattoos. The group camps out by the river banks, but just as they are sitting down for some campfire supper, pterosaurs cry out and come swooping in, whisking away one and then a second Blurrg, as well as one of the guild hunters, before Mando and the others can fend them off with blaster fire. Greef is badly wounded during the skirmish, and the talon’s poison starts coursing through his body. All seems lost, until the Child ambles on up and lays his tiny hand on Greef; moments later, the wound and infection is gone!

After mobilizing at daybreak, Greef at one point utters, “I guess this is it,” which apparently was a signal to the other hunters to get the drop on Mando and Cara — except Greef turns on his heels and guns down his hunters instead. He admits that the plan was to double-cross Mando, but seeing the Child save his life triggered a change of heart. Spooked, Mando sends Kuiil back to the Razor Crest to safely stow the Child, while he, Cara and Greef continue on into town with the (empty) carrier, and with a cuffed Mando pulling the Wookie Prisoner Trick. After passing the entry checkpoint, Cara and Mando note that there are a lot more trooper-clad guards hanging around than promised, but once inside the Client’s common house, they see just “four.” The Client asks to see the Child, but is told that it is sleeping. His insistence on eyeballing the asset is interrupted by a call he must take, from Moff Gideon, who hints that a ruse is afoot. 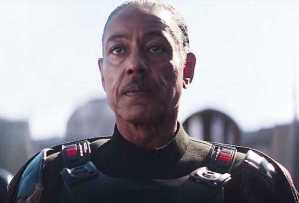 Instantly, blaster fire erupts through the bar window, felling nearly everyone save for Cara, Greef and Mando. Outside, a line of Death Troopers stands just beyond the window. A transport then pulls up and drops off dozens of shiny-clean troopers — after which, a TIE Fighter swoops in and lands. From it emerges Moff Gideon, who beseeches the Mandalorian to turn over the Child.

“You have something I want,” Moff Gideon (played by Breaking Bad‘s Giancarlo Esposito) says, declaring that Mando has no idea what he is in possession of. The Child, he asserts, “means more to me than you will ever know.”

Mando all this time has frantically tried to hail Kuiil, to see if he and the kid are safely aboard the ship yet. But just before we cut to credits, we see the Child getting plucked off the ground by a trooper on a passing speeder bike, with a seemingly slaughtered Kuiil laying motionless just steps from the ship.

What did you think of “The Reckoning”?