RuPaul’s Drag Race may be on hiatus, but if a lip sync extravaganza is what you crave, Netflix can offer you a quick fix in the form of Soundtrack, a new musical drama from the mind of Smash‘s Josh Safran.

Now streaming, the series premiere introduces viewers to Nellie (Graves‘ Callie Hernandez), a young artist whose musician boyfriend just got his big break. Levi is on the precipice of stardom, so when he makes special dinner reservations for their anniversary, Nellie is sure — or at least her friends are sure — that he’s going to propose. But anyone who’s seen Legally Blonde can predict what’s coming next: Not only does Levi not propose to Nellie, but he breaks up with her, explaining that there simply isn’t a place for her in his new future.

Then comes something (the movie version of) Elle Woods would never give us: a musical number. More specifically, we get a lip synced performance of Sia’s “Elastic Heart,” during which Nellie relives all of her previous heartbreaks and remembers how she managed to bounce back from each one. And this isn’t just a turning point in Nellie’s life; it’s also one for the viewers, who must decide whether to revel in the fantasy of Soundtrack‘s lip syncs (of which there are many!), or if the concept is just too much to handle.

Following a disappointing post-Levi dating montage (set to the tune of Amy Winehouse’s “Love Is a Losing Game”), Nellie accidentally gets her phone wet, sending her to the bathroom in a panic. There, she meets Joanna (Flirty Dancing‘s Jenna Dewan), though the two speak as if they’ve known each other forever. Joanna complains about the lack of romance in the world today, wondering when things became so impersonal. She also gives Nellie the fortune from her cookie, which promises, “Your luck is about to turn around.” And it does… but we’ll get to that. 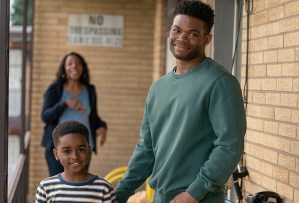 The premiere also introduces us to Sam (Greek‘s Paul James), a widowed single father whose new apartment doesn’t quite meet the high standards of his late wife’s mother (Revenge‘s Madeleine Stowe). She’s an actress, presumably of Hallmark Christmas movies, since Sam mentions that she’s often filming in Toronto. And she’s right to worry about her grandson, especially with sketchy characters like Sam’s recently incarcerated cousin Dante (Degrassi: The Next Generation‘s Jahmil French) skulking about.

Things go from bad to worse when a high Dante is late to pick up Sam’s son Barry from school, a minor crisis that manages to attract the attention of Child and Family Services. But even after Sam is fired from his job for being “late” (i.e. misinformed) on a project, he remains hopeful about the future. And when the CFS worker shows up for a surprise visit, it turns out to be none other than Joanna (yes, from the bathroom!), and Sam finally gets those back-of-the-neck goosebumps he hasn’t experienced since he lost his wife.

Then comes a twist of This Is Us proportions: Nellie was Sam’s wife! We’re living in two separate timelines, people! And Joanna may or may not be some sort of time-traveling ghost! (OK, I made that last part up, but the rest of it genuinely caught me by surprise.)

Your thoughts on the Soundtrack premiere? Will you continue your binge, or was one hour enough to satisfy your curiosity? Grade the episode below, then drop a comment with your full review.