CBS’ NCIS this Tuesday filled in some blanks on Ziva and Tony’s relationship, before sending at least a few jaws to the floor with one mother of a twist.

Setting the stage for Ziva’s latest encore was the “one thing” she needed to tend to before reuniting with her family, and that was making sure that Adam Eshel was OK. Because in flashbacks, we saw how Adam helped Ziva by whisking Tali to safety in the immediate wake of the bombing of Eli’s farmhouse; years later, he came to her with a fake passport that would get her to the States, where he would funnel intel on Sahar’s network.

Alas, Adam is not OK in the present day. He has been abducted. A photo on a flash drive leads Ziva and Gibbs to the wobbly, abandoned warehouse where Adam is being held. Ziva and Gibbs gun down his captor, but Adam is in rough shape. Before help can be alerted, Ziva and Gibbs plummet through the weak floor to the level below, and there is no easy way back up. To distract panic-prone Ziva from acting brashly, Gibbs inquires about Tali, and Ziva details the first time she rendezvoused with Tony and their daughter, in Cairo — so yes, DiNozzo knows Ziva is alive, and has (briefly!) been with her. But since then, they have had minimal contact, while Ziva aimed to neutralize the Sahar threat. 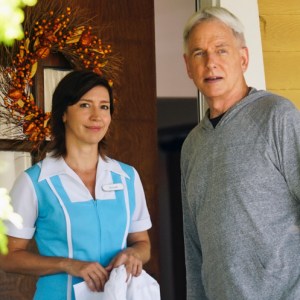 Oh, speaking of Sahar — it turns out that the lady killed at the start of the season was a decoy. Before expiring from his torture wounds, Adam uttered, “You know Sahar.” But we later realize his message wasn’t to Ziva, but Gibbs. And it was regarding Phineas’ mother, Sarah!

Mind. Blown. (Though let’s face it, Phineas’ mom always seemed a bit “off.”)

Longer story short, Ziva tracks down The Real Sarah at the wobbly warehouse, but winds up getting bested and pinned down by a massive pipe-type thing. Sahar taunts Ziva by sharing that Adam, while delirious, revealed that Ziva has a secret daughter. And just as Ziva, by killing Ari, thwarted Sahar’s legacy, Sahar will end Ziva’s. Except she won’t, because Gibbs is about to put a bullet between her eyes.

In the aftermath, Ziva tells Gibbs that she had slipped word to Tony to get Tali into hiding, and that once he and Tali are safe and settled, he will reach out.

Meanwhile, coming off an exchange they had earlier in the episode, Odette tells Bishop that she sees promise in the NCIS agent, and offers some “specialized training”….

What did you think of NCIS‘ Christmas episode, “The North Pole”?