Having heretofore channeled spaghetti westerns and samurai movies, Disney+’s The Mandalorian this Friday took a stab at the prison break genre — only to leave us feeling locked up, alongside a bunch of cosmic boors.

The most guest star-heavy episode to date, “The Prisoner” saddled our hero with several different flavors of jerkwad, as he fell back on an old habit — merc work — in order to get some bread. A former associate named Ran (Sons of Anarchy‘s Mark Boone Jr) welcomed Mando back into the unseemly fold, to help spring a pal who got nabbed by some rivals. But after being introduced to the rest of the crew — Mayfeld, a former Imperial sharpshooter (F Is for Family‘s Bill Burr); Burg, the Devaronian muscle (Emergence‘s Clancy Brown); Xi’an, a blade-wielding and, ugh, scenery-chewing Twi’lek (Game of Thrones‘ Natalia Tena); and Zero, a cocky droid (The IT Crowd‘s Richard Ayoade) — Mando realized that they needed his Razor Crest to sneak up on a New Republic prison ship, which is allegedly manned only by droids.

What followed was nothing particularly clever or the slightest bit fun, but instead was drab and patience-testing, as Mayfeld & Co. taunted the Mandalorian about his code, helmet and true identity (though that did tee up a solid Gungan dis), before they accidentally discovered his unusual cargo — the Child. Mayfeld’s handling of the “pet” made Mando (and us!) a bit anxious, but luckily it was cut short by the ship’s rough docking with the prison ship. 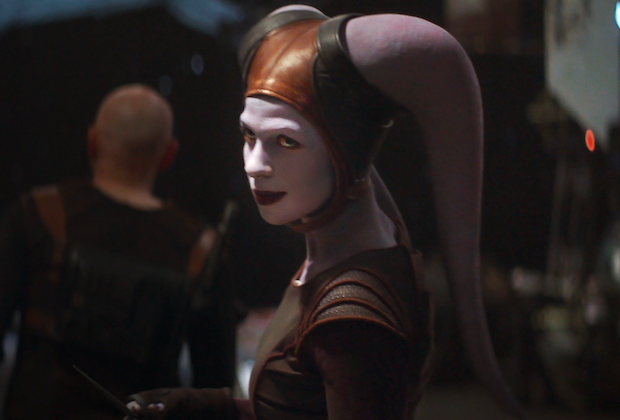 Breaching the vessel, Mando exceeded his crew’s cynical expectations by making mincemeat of a small horde of guard droids. Things got dicey, however, upon storming the control room (one of the series’ flimsier-looking sets), where they encountered a human New Republic soldier (hey, Timeless‘  Matt Lanter!) who threatened to trigger a distress beacon. Mayfeld was rarin’ to shoot dead the threat, but Mando wanted no part of cold-blooded bloodshed. The stalemate between Mando, Mayfeld and Burg was ended by the zing of Xi’an’s blade, across the room and into the soldier’s belly. But not before he activated the beacon.

The group quickly found and sprung their target — Xi’an’s brother Qin (Berlin Station‘s Ismael Cruz-Córdova), who is no fan of “the man who left me behind” in the first place, aka the Mandalorian. And on that note, Burg shoved Mando into the vacated cell, locking it behind him. Not one to so easily be bested, Mando lassoed and laid waste to a guard droid, using its ripped appendage to unlock the cell. We then switched into sci-fi horror mode, as Mando carefully stalked those who betrayed him, one by one, first by nearly crushing Burg inside a sliding door, and then besting both Xi’an and Mayfeld.

Meanwhile aboard the Razor Crest, Zero spied the Child and grabbed a rifle to hunt the elusive oddity. Once Zero tracked down the kid, Baby Yoda started to use Force magic, soon after which the droid exploded! But the (relieved) Child and we then realized Mando had blasted the ‘bot from behind.

Mando delivered Qin to Ran and collected his payday. But when he flew away in the Razor Crest, Ran issued an order for the Mandalorian to be killed. A gunship readied for takeoff from the space station, just as Qin realized that Mando had placed the distress alert beacon on him. Meaning, the New Republic X-wings dropping out of hyperspace at that second were coming after him, bombarding the bay with laser blasts.  Meanwhile, now in hyperspace themselves, Mando said to the Child, “I told you that [taking merc work] was a bad idea,” while we see that back on the prison ship, he had merely locked up Mayfeld and the others.

What did you think about Episode 6, “The Prisoner”?