Elizabeth Keen might want to clear some closet space, because The Blacklist‘s fall finale gave her a lot to unpack.

Among the revelations Liz learned during this hour: (1) Reddington is not Ilya Koslov, as her grandfather had led her to believe; (2) Dom planned to have Katarina killed years ago, in an effort to protect Liz (uh, awkward); and (3) Katarina is looking for answers that Red, Ilya and others have been keeping from her — and her life is only in danger once again because Liz went looking for her last season. (I repeat: Awkward.)

During the episode, both Red and the FBI finally closed in on Katarina — each with their own motivations for doing so — but upon hearing that Katarina is seeking an important truth, Liz decided to align with her mother. She helped Katarina get out of their apartment building undetected, promising to keep her out of the FBI’s grasp as long as possible.

Unfortunately for Katarina, Red did detect her leaving Liz’s building, prompting him and Dembe to tail the getaway car she’d hot-wired. But after a several-mile pursuit, Katarina was T-boned by an SUV, and Red watched in shock as two men got out of the car and gunned down Katarina in the road. In Red’s estimation, the Townsend Directive — aka that standing bounty on Katarina’s head — had just been fulfilled by those two anonymous men, and he later informed Liz that Katarina had died (leaving out the small detail of Katarina’s real name, of course; he still referred to her as Maddie Tolliver).

Liz was expectedly devastated at the news of her mother’s demise, though she gave a good poker face until Red was no longer around. That‘s when she broke down in tears… until she got a phone call from none other than Katarina, who explained that (1) she had faked her death, and (2) she needed to disappear for a while, though she still had every intention of working with Liz to find the answers they’ve been seeking. Liz confirmed that Red had been fully convinced by Katarina’s “death,” and she assured her mother that she’d keep her very-much-alive status a secret. “I love you, Masha,” Katarina tearfully concluded. “Be safe,” Liz replied.

After screening the fall finale (which marks the last Blacklist episode until March 2020), TVLine spoke with executive producers Jon Bokenkamp and John Eisendrath, who teased what’s to come now that Liz and her mother are on the same side.

TVLINE | Let’s start with Katarina faking her own death. When you were breaking this season, was there ever a time when you had planned to actually kill her off? Or were you always thinking of bringing her into the back half of Season 7?
EISENDRATH | You know, it’s always an evolving story. Initially, at the end of last season’s finale, the first draft had Red killing Katarina. And we never would have had any of this. But we realized that was maybe not the greatest idea we’ve ever had, and at some point we thought, “Oh, maybe for the midseason cliffhanger, she should die.” And then we were like, “Uh, maybe not.” And part of the reason is that most successful shows have a life of their own, and the writers try to follow the story as much as write the story. And particularly when you have someone like Laila Robins [who plays Katarina] — she was just so good that it made us feel like, “Oh, we want to write for her.” So it was a combination of reasons. It was partly that we just weren’t smart enough to see from the beginning that it would be worth keeping that character around, and secondly, she was so good, and thirdly, we realized that the story is incredibly dramatic, and we should live with that. So the short answer is yes, we did think of killing her off repeatedly. [Laughs] 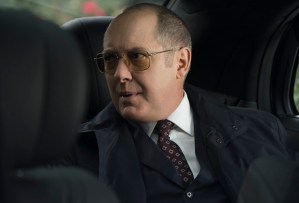 TVLINE | But to be clear: Katarina being alive means that the Townsend Directive is still in play, correct? That’s still something she should fear?
BOKENKAMP | That is correct. We saw tonight that these crazy brothers who showed up trying to kill her and collect the bounty — they were ultimately working with Katarina. But there are a number of people around the world who have a beef with Katarina Rostova and are looking for her. The Townsend Directive is very much a real threat for her, and it remains a looming danger.

TVLINE | Katarina and Liz working together is a fun dynamic that we haven’t seen on the show before. How would you describe their alliance? Does Liz fully trust her mother?
EISENDRATH | She’s not 100 percent confident that she can trust Katarina. At this point, she thinks Katarina may offer her a greater chance of finding out the truth that it seems Red won’t share with her. But she certainly is not fully trusting of Katarina at this point, so as the season goes on, there will be choices that she’ll have to make — whether to stay aligned with her mother, whether to be more sympathetic toward Red’s point of view. And when [Liz and Katarina] are together, hopefully we will be able to deepen the relationship and let them live in the truth of who they are. We’ll be able to build up to a great season finale with Liz deeply connected to Katarina as Katarina and Red have a big confrontation at the end of the year.
BOKENKAMP | And all of that is happening behind the back of Reddington. He believes Katarina is dead. The Townsend Directive has been fulfilled, Katarina Rostova is dead, and on with life. That does make it rather interesting, with the growing relationship between mother and daughter happening without Reddington’s knowledge. At least for now.

TVLINE | And now that Red does believe Katarina is dead, what does that mean for him? Will he want to return to business as usual, giving the FBI those cases of the week?
EISENDRATH | That’s a very good question.
BOKENKAMP | Now that Red is able to put this to bed, it won’t mean that the show will suddenly become frothy and light. But Reddington is in a different headspace, and when we come back in March, he is unencumbered, and we have a lot of fun. We have some really fun stuff coming up. That doesn’t mean there isn’t darkness underneath it, because there’s this rolling boil of Katarina and Liz and their hunt for the truth. But our entry point in March, and for a while, will be a little bit lighter, a little more fun. And we get to take a breath with Red, who feels like this is all over. Sadly, that’s not the case.

OK, your turn. What did you think of The Blacklist‘s fall finale? Grade the episode in our poll below, then drop a comment with your full reviews!