A Stumptown love triangle is solidified in the freshman drama’s fall finale, which picks up the morning after Dex and Liz’s supposed hookup.

At the start of “Dex Education,” Dex wakes up next to Grey’s very naked girlfriend. The unlikely bedfellows can remember leaving the casino and coming back to Dex’s place, but they can’t remember whether or not they had sex. Liz sneaks out to avoid Ansel (by jumping from a second-story balcony!), then makes her way to Bad Alibi, where she lies and tells Grey that she and Dex had a pretty “tame” night. Dex, meanwhile, tells Grey that the whole night’s a blur. Then, down at the police station, she asks Miles for a “raincheck” on karaoke later that evening because she is “still recovering” from her girls’ night out. 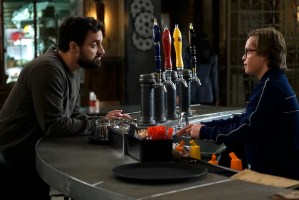 Later on, when Grey sneaks up on Liz in the stock room, she admits that she’s been avoiding him all day. Last night was “an odd one,” she says, and her head’s been racing all morning. But rather than come clean, Liz tells the barkeep that she has developed real feelings for him, and sometimes those feelings are scary. He assures her that he’s in “exactly the same place,” and they kiss. By that afternoon, Liz seems to have moved on from what happened with Dex entirely. Ansel tells Grey that Liz seems happy — and she was especially happy during her “sleepover” with Dex.

Shortly thereafter, Grey comes right out and asks Liz if she and Dex slept together. Liz doesn’t deny it. She swears that she never meant to hurt Grey, and she’ll tell him anything he wants to know. Waking up naked in Dex’s bed was not how she wanted the night to end, but she’s “not sure Dex would say the same.” That last part feels deliberate, like Liz is trying to blow up Dex and Grey’s friendship to save her own relationship with Grey. This suspicion is confirmed in the following scene at the bar, when Grey heads out to confront Dex. He asks her point blank if she slept with Liz, while Miles is sitting within earshot. Grey tells Dex that she should work out of another bar, then Miles walks out without saying a word to Dex. We then cut to a close-up of Liz behind the counter, who seems rather satisfied with what just went down. (Hmm…)

Outside, Dex runs after Miles, who tries to brush off the severity of the situation. He tells Dex that they never had the “exclusivity” talk, and it’s fine. Only it’s not. And Miles is not fine. Meanwhile, Dex eventually heads back to the bar to confront Grey. She tells him that she feels like she’s being falsely accused of wanting to sleep with Liz, which she swears was not the case. “You ended up in bed with my girlfriend who was naked under questionable circumstances… Can’t you see how that might actually be worse?” Grey asks. “I mean, sex is definite; we can deal with that tangibly versus this. This is just chaos, Dex. You’re a time bomb. You haven’t processed your past at all — from your parents, to Benny, to the war — so you just seek chaos in your life.” In one move, he says, she destroyed his relationship with Liz, and hers with Miles, and he doesn’t want her around anymore. 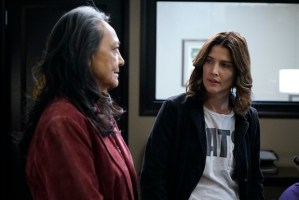 Determined to prove that she’s not as bad as Grey is making her out to be, Dex heads back to the casino and convinces Sue Lynn to let her see security footage. She wants to get a sense of how she behaved when she was with Liz. The video ultimately reveals that Liz set Dex up. She spent the night dumping her drinks in Dex’s glass when she wasn’t looking — but why? This will soon become known, but first, Sue Lynn offers Dex a piece of advice. “I know we have our issues, but from an outside perspective, it’s time to clean up [your act],” she says. “Make your bed… Anyone can make their bed, begin a path to order. Once you get order, you can start to forgive yourself. Stumbling drunk with another man’s girl is not a good look,” regardless of whether Liz is in the wrong.

Back at the precinct, Dex pulls Miles aside to fess up to her “misstep.” He tells her that they’re “cool,” but it’s best if they keep things professional moving forward. Once Dex leaves, Kara tells Miles that he’s being an idiot; it’s OK to let himself to be vulnerable and tell Dex how he really feels. 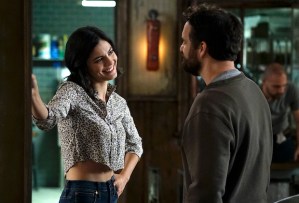 Meanwhile, on the other side of town, Grey calls Liz into his office. He has just seen the surveillance footage that Dex sent him, and he knows that his girlfriend was lying. Liz insists that she was trying to protect their relationship, but Grey is unmoved. “I unloaded on [Dex] and it was based on a lie,” he says. He tells Liz to pack up her things and leave; it’s over between them. “I’ll leave,” Liz answers. “But for the record, I was never the one you wanted to be with… You can’t have a relationship as long as she’s in your life. No one can get as close to you as [Dex] can… I’m sorry for what I did, but you need to face the facts, Grey.”

We next see Dex back at home. Having decided to take Sue Lynn’s advice, she begins to make her bed and misses a call from Grey, who has seemingly decided to “face the facts” and tell Dex that he has feelings for her. When she doesn’t pick up, he leaves the bar and drives towards her house. While he’s on his way over, Ansel enters Dex’s bedroom and tells her that he wants to move out, having spent much of the episode researching how to get his own apartment. The conversation between brother and sister is then interrupted by a knock at the door, but it’s not Grey. It’s Miles, who tells Dex that he’s not happy with how they left things down at the precinct, and he’d like to come in and talk. Grey pulls up outside just as Dex lets Miles in, and realizes that he’s missed his chance — at least for now.

What did you think of the Stumptown fall finale? And what are your overall thoughts on Season 1 (so far)? Weigh in via the following polls, then hit the comments.