The investigation into Tiffany Hudson’s murder took a backseat on Wednesday’s fall finale of Nancy Drew, which introduced a few slightly more pressing matters into the mix — including one jaw-dropping final twist.

Let’s begin with the case of George’s missing sister: Ted’s mysterious disappearance triggered Nancy’s memories of a kidnapping case she solved back when she was 12. (Humblebrag!) With the original kidnapper, a real barrel of monkeys named Nathan Gomber, still behind bars, Team Nancy deduced that a copycat must have taken Ted. And after a little more digging, we got a name — Moira Baker.

But by the rules of Nancy Drew, this couldn’t just be your average, run-of-the-mill kidnapping. As Nancy remembered during a return trip to Nathan’s abandoned hideout, she once heard him conversing with a dark spirit named “Simon,” who apparently tricks desperate creeps (like Nathan!) into feeding him the souls of kidnapped children in exchange for their greatest desires. Nancy’s emotional impulse to destroy Simon’s altar not only rid her of the malevolent presence but also helped Nick and George track down Ted’s kidnapper. Win-win!

Actually, make that just one win. Yes, Ted was rescued from Moira’s clutches, but according to Nathan’s chilling warning, Nancy and her friends haven’t seen the last of Simon. (In very related news, Ace also woke up from his coma at the end of the episode. Is there even a remote possibility he isn’t being possessed by Simon?)

As if the imminent threat of a new demonic presence wasn’t enough of a cliffhanger to leave us on, the fall finale delivered a doozy of a game-changer in its final minute. While assisting Nancy and her dad with their investigation into Nathan’s hideout, she stumbled upon Nancy’s journal, which contained an alarming amount of evidence tying her father to Lucy Sable’s murder. Following a secret investigation, the authorities discovered his fingerprints on a knife from the scene of Lucy’s death, the smoking gun that got him arrested. 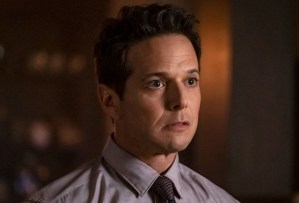 Here’s the thing, though: If Nancy’s dad is innocent, his bizarre reaction to being taken away in handcuffs did little to help his case. Rather than assuring Nancy that everything will be OK, he simply said, “Karen found it in plain sight. You have quite the list of evidence against me.” And he delivered these lines exactly how you would expect a murderous sociopath to say them. Is Nancy about to join Betty Cooper in the deadly dad club?

We also received a slightly smaller curveball when Bess confided in Owen that they’re… cousins? She admitted that it could just be an old “family story,” but he was still willing to take a DNA test. In fact, he was oddly enthusiastic about it. His only stipulation was that she had to submit some of her own DNA for him to privately test himself. That’s not necessarily a red flag, but it’s probably worth remembering. (Just don’t write it in your journal, or that nosey narc Karen will read it without your permission.)

Your thoughts on Nancy Drew‘s fall finale? Theories about the second half of the season? Grade Wednesday’s below, then drop a comment with your full review.