Even in a world of participation trophies, broadcast-TV is having a harder and harder time competing in the industry’s major award shows — to a degree that one might wonder if a network show or star, worthy though they may be, can ever break out again.

Among this week’s nominations for the 2020 Golden Globe Awards, ABC, CBS, NBC, Fox and The CW combined for exactly zero (0) nominations out of 55. The SAG Awards weren’t much kinder, with just one of 45 nominations going to a broadcast-TV series or actor — and that would be This Is Us‘ Sterling K. Brown.

In fact, were it not for This Is Us‘ Brown, you’d have to go back to 2015 to find a broadcast-TV actor — Emmy and SAG winner Viola Davis (of ABC’s How to Get Away With Murder), or Globe winner Taraji P. Henson (Fox’s Empire) — claiming any lead or supporting honors. And if you look at just drama dudes, Kyle Chandler won the Emmy for Lead Actor in 2011, if you count Friday Night Lights‘ final season (which premiered on DirecTV, then later turned up on NBC). If you don’t, then you’re dialing it back to 2009, when Michael Emerson of ABC’s Lost won for supporting actor.

When did broadcast TV last take home any Best Drama prize? This Is Us actually has won SAG’s Outstanding Drama Ensemble for the past two years… though it isn’t in the running this time around. (Sterling K. Brown is SAG’s only network nominee this year.) As for the Primetime Emmy Awards and Globes, it has been 13 years since a network drama — Fox’s 24 and ABC’s Grey’s Anatomy, respectively — came out on top in those contests.

Thirteen. Years. And soon to be 14 for the Globes, which didn’t nominate a single broadcast drama for 2020. 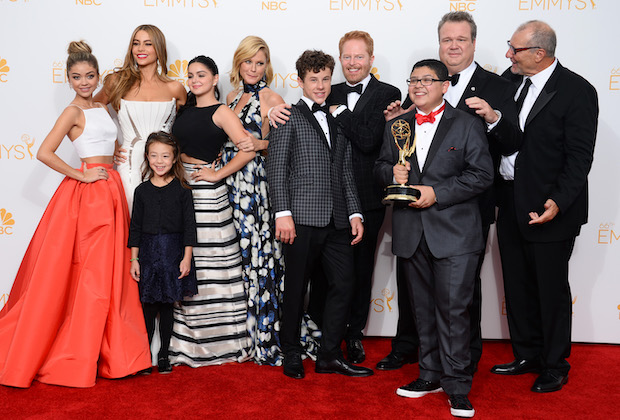 For comedy contenders, the major award shows are no laughing matter, either. ABC’s Modern Family was the last broadcast-TV program to win the Emmy for Best Comedy — back in 2014 (and for what was a fifth consecutive year, imagine!). A year before that, Modern Family and what was then Fox’s Brooklyn Nine-Nine won the top prizes at SAG and the Globes, respectively.

Among comedy actors: As recently as 2017, Saturday Night Live‘s Alec Baldwin and Kate McKinnon swept the supporting categories at the Emmys; in the lead races, Jim Parsons (The Big Bang Theory) won in 2014, while Melissa McCarthy (Mike & Molly) took home the Emmy back in 2011.

At the Globes, Tracee Ellis Ross (of ABC’s black-ish) won for lead comedy actress in 2016, while Andy Samberg (Brooklyn Nine-Nine) was named best actor in 2013. You then must leap back to 2010 for broadcast’s last supporting wins at the Globes, by Glee‘s Jane Lynch and Chris Colfer. SAG meanwhile last gave any win to a broadcast sitcom performer in 2013, to Modern Family‘s Ty Burrell; the year prior, 30 Rock‘s Tina Fey was named best female actor in a comedy or musical.

All of which is a long way of saying that when it comes to winning awards for scripted dramas and comedies, broadcast-TV surely had its time in the sun. But now, especially with so much premium (and star-studded) content landing on streaming services — and nearly 600 scripted programs now available via all outlets —  the field is more competitive than ever at the Emmys, Globes and SAG Awards. And Sterling K. Brown is but one man!

Will — can? — any new Emmy bait emerge from NBC, ABC et al, to keep the networks in the game?  This Is Us and SNL are keeping the networks in the awards-season conversation, though just barely. And as we all know, scripted shows do not improve their lot/add nominations over time; quite the contrary. Outside of This Is Us, the only current broadcast show to muster much acclaim is The Good Place, though it thus far has failed to convert any nods into trophies. And with so many outlets vying/bidding on quality content and name actors, is a prudent broadcast network even able to groom The Next Award-Winning Hit?