The Bunkers and the Stivics are set for a Live encore.

ABC on Wednesday announced that Woody Harrelson, Marisa Tomei, Ellie Kemper and Ike Barinholtz will reprise their respective roles as Archie, Edith, Gloria and “Meathead” in its holiday-themed Live in Front of a Studio Audience special (airing Wednesday, Dec. 18 at 8/7c). They will be joined by new cast members Kevin Bacon, Jesse Eisenberg and Justina Machado in as-yet-specified roles.

As reported in November, the second edition of Studio Audience will feature episodes of Norman Lear’s All in the Family and Good Times. Casting for Good Times will be revealed at a later date (though soon, let’s hope!). 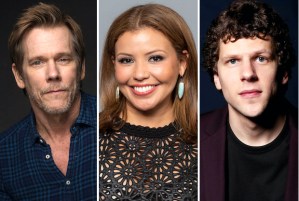 Eisenberg previously appeared opposite Harrelson in two film franchises (Zombieland and Now You See Me), while Machado — who was supposed to play The Jeffersons’ maid Florence in the first Studio Audience special, but was replaced by surprise guest star/original portrayer Marla Gibbs — currently stars in Lear’s One Day at a Time reboot.

ABC has not yet confirmed which episodes of All in the Family and Good Times will be recreated as part of the broadcast. The former sitcom did multiple Christmas installments — including, but limited to: Season 2’s “Christmas Day at the Bunkers'” (which featured Louise, Lionel and Henry Jefferson), Season 4’s “Edith’s Christmas Story” (in which Edith had a breast cancer scare) and Season 7’s “The Draft Dodger” (in which Mike’s draft-dodging friend David attended Christmas dinner). Good Times, meanwhile, celebrated Christmas on three occasions — though only one of those outings occurred before the exit of original series star John Amos (Season 2’s “Sometimes There’s No Bottom in the Bottle”).

Live In Front of a Studio Audience: Follow-Up Ideas

Airing on May 22, the first Live in Front of a Studio Audience special averaged 10.4 million total viewers and a 1.8 demo rating, dominating the night in both measures while giving ABC its most watched season-ending Wednesday in 12 years. It was nominated for three Emmy awards and took home the statue for Outstanding Variety Special.

Are you excited to see the All in the Family cast return? And who do you think Eisenberg, Bacon and Machado will play?