This Tuesday on The Flash, Barry and the other paragons teamed up to stop the Crisis. But did they act fast enough? Also, was a deal with the Devil able to save undead Oliver?

Part 3 of the crossover event opens in New Gotham of Earth-203, where Birds of Prey’s Huntress is trying to warn Oracle/Barbara of the anti-matter wave. Alas, it’s too late. Another blue marble has been lost to the Anti-Monitor.

Meanwhile on the Waverider, Cisco, Frost and Ralph breach in to help, just as Ray fixes the “paragon detector” to ID J’onn, Barry and Ivy Town U. physics professor Ryan Choi as the respective paragons of Honor, Love and Humanity. Down the hall, Diggle has (finally) arrived to learn of Oliver’s roller coaster fate — dead, but since revived by a Lazarus Pit and in need of getting his soul back. On top of all that, Lyla has gone AWOL. Dig commands the Monitor to “cut the crap” and find his wife, who is likely now in the Anti-Monitor aka Mobius’ clutches. The Anti’s goal? To destroy the multiverse and replace it with a universe that he and he alone can control.

Cisco discovers that the source of the anti-matter wave is in their own “back yard,” beneath the streets of Central City. Just as Cisco begins to act on that intel, the Monitor pop up to report that Vibe is needed back — and poof, despite his protests, Cisco is powered/suited back up. That upgrade comes in handy, because once in the tunnels with Frost, Cisco must vibe Pariah’s memories to learn how to open the door to the Anti-Monitor’s lair, behind which lies the nexus of the Big Bad’s operation — an energy cannon powered by a treadmill… which is  powered by a blurring speedster! 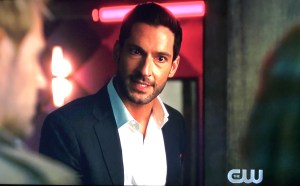 Meanwhile, locked-up Lex Luthor gets wind of and laughs off Kara’s plan to use the Book of Destiny to restore Earth-38, while Kate privately frets that she will need to use Bruce’s kryptonite stash to stop the Girl of Steel from risking very likely madness. Over on Earth-666, Constantine calls in a favor from old friend  Lucifer Morningstar (hey, Tom Ellis!), to gain temporary access to Purgatory in the name of saving Oliver’s soul. Lucifer agrees, but only because he owes John a favor — “for Maze.”

Back at the nexus, Barry & Co. realize that it’s the Flash/Barry Allen from Earth-90 powering the treadmill, upon breaching him free. Though appreciative of the breather, Flash-90 warns everyone that if the cannon is left unpowered, it will self-destruct — along with all worlds. Pariah fetches Jefferson Pierce aka Black Lightning, who is devastated/furious to learn that his own Earth/family just got vaporized. But he also recognizes his duty to help other Earths avoid such a fate, so he does what he can to contain the cannon’s eruption.

Iris, Ralph and Ray head to Ivy Town U. to find Ryan Choi, but as big a Ray Palmer fan as the professor is, he has a wife and six-month-old daughter to be with during such a time of… crisis. Eventually, Iris is able to use what Barry described as her own super powers — “intelligence, resourcefulness and heart” — to convince Ryan to join in the universe-saving fight.

Back on the Waverider, Kate tells Kara that using the Book of Destiny is not the answer, that “it will destroy you.” When Kara insists, “I have to do this,” Kate counters, “Then I have to stop you” — while secretly palming the kryptonite. “If you take this chance and something happens to you, we’re all doomed,” Kate argues — quite successfully, as Kara walks away. Whew.

With time running out for Black Lightning, Flash-90 and Barry duck into flashtime for a confab, during which Barry realizes they must reverse the treadmill — which Barry will do, and thus “vanish in Crisis” as fated. As such, he shares a warm goodbye with Cisco and Caitlin, saying he could not have been a hero without the first two people he laid eyes on as Flash. Just then, Flash-90 grabs Barry to steal his speed, noting that the Monitor only said “Flash must die,” never specifying which one. After flashing back to his 1990s roots, Flash-90 — with Cisco’s go-ahead — hops on the treadmill and gets to hoofing it. “Keep riding the lightning, son,” he tells our departing Barry with a wink. And with the cannon’s wave reversed, Earth-One — the last remaining Earth — is saved! 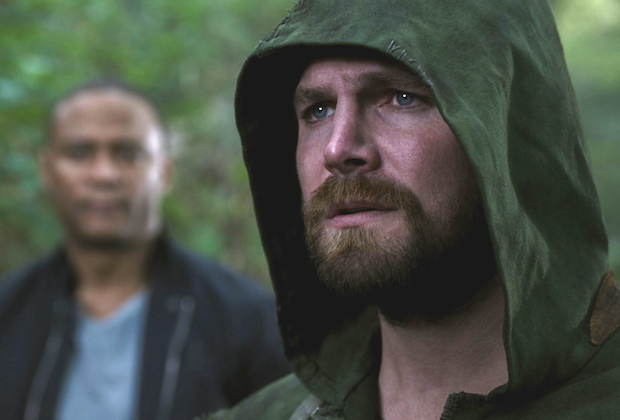 Meanwhile on Lian Yu, bloodthirsty Oliver attacks Diggle, Mia and John, but after some simple platitudes from his “brother,” he snaps out of his amnesic rage. Just then, Jim Corrigan aka Spectre approaches the group, declaring that Oliver has been called to a “higher purpose” — to “light a spark” — or else all universes will perish. Oliver accepts that destiny and bids everyone adieu (again), before Dig and Mia are teleported back to the Waverider.

Aboard the time ship, Barry and Jefferson bond over stories of their fathers… Kate and Kara make nice… Iris, Ray and Ralph return with Ryan Choi… and even Lyla returns! Lyla, though, isn’t quite herself. No, it soon becomes clear that she is a vessel for Mobius, who declares, “It is time to end the Age of Heroes and everything you hold close!” Possessed Lyla easily KOs Diggle and the Supes, while the Monitor informs Pariah that humanity’s fate is in his hands. Taking that cue, Pariah teleports the paragons to safety, while Iris and the others are left behind to be vaporized by the anti-matter wave that just wiped out Earth-One.

The paragons, it turns out, were transported to Legends of Tomorrow‘s Vanishing Point, a place located outside of space and time (and thus invisible to the Anti-Monitor). But just as they gain their bearings, Kingdom Come Superman doubles over in pain, as fiery light slices in and out of him. Moments later, we realize that Lex Luthor, using the Book of Destiny, decided that “destiny could use a rewrite,” swapping him into Superman’s place.

“Crisis on Infinite Earths” resumes and concludes on Tuesday, Jan. 14, in episodes of Arrow and Legends.