Black Lightning isn’t joining the Arrowverse this Tuesday night — because he is in fact already there.

For those who missed Black Lightning’s fall finale on Monday, it revolved around the Crisis’ fiery red skies inching toward Freeland, an event which among other things caused Jefferson Pierce’s younger metahuman daughter, Jennifer, to “splinter” and visit two of her doppelgänger selves. But at the close of the episode, just prior to Crisis erasing Freeland from existence, Jefferson was teleported away in a flash… to next resurface tonight on The Flash, in Part 3 of the crossover event (airing on The CW at 8/7c)

TVLINE | When did you first get word you would finally be playing with rest of the Arrowverse?
It was a little bit after Comic-Con, probably sometime in August. I had a sense from just the buzz at Comic-Con. It was probably the first year where I felt like, “Oh, I think it’s going to happen this year, and I’d be surprised if it didn’t.” It wasn’t too much longer after that I got the official call.

TVLINE | Did you ever think that maybe this won’t ever happen? Or did you always suspect it was just a matter of time?
No, I never thought it would never happen; I always figured it was a matter of time. People have been wanting the crossover since we were a pilot, but for me, I always just wanted a season to establish our world and our story and our rhythm. After that, I was ready to go.

TVLINE | Does Jefferson come to us in Part 3, or do we seek him out?
I guess it’s a little bit of both…? He gets pulled into the conflict, but by the definition of getting “pulled in,” you’re coming to him at the same time. 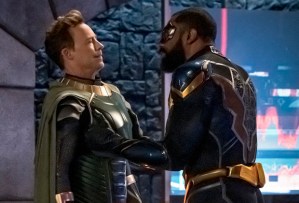 TVLINE | In the promos he looks a bit angry….
Yes! It’s surprising to him. It’s not a situation where somebody came to him and said, “Hey, we’d like you to do this….” It comes as a shock, and that’s why he seems a little angry.

TVLINE | Has Jefferson previously “heard of” any of these other superheroes? Or is this all brand-new information to him, that they actually exist?
I think it’s brand-new. I liken Freeland to what our existence is — he has heard of them, but not as real entities. They’re more fictional characters to him.

TVLINE | Does Black Lightning bring a peculiar set of skills to the situation?
Besides, of course, the electrical power, there’s a certain level of savvy — because this is something he’s been doing longer than everyone else.

TVLINE | What was it like for you, personally, joining the Vancouver mix? Because it is like it’s own universe up there in Canada.
It was really cool. This is my third time now working there. A long long time ago, in the ‘90s, I did a miniseries that shot partly in Vancouver. And then when we did the pilot for Black Lightning, we shot most of it on Atlanta, but after we went back to L.A. we needed to do some additional shoots, so I went to Vancouver for like a day. I love Vancouver. And all of these other shows — other than Batwoman — have been doing it longer than we have, so it was cool to “see how the other half lives” and to exchange stories on how they do things, and what works for them and what works for us…. They had a lot of knowledge of the day-to-day, but we came on with, like, the best suit. [Laughs] Everybody was in awe and envious of my suit, and the technology of how my mask is attached….

The first thing is you have to go up to everybody and touch their suit and hear their stories about how comfortable it is, what are the things they don’t like about it…. And you know being on the Waverider, I had to go to the captain’s chair and touch all the buttons, because I’m a really tactile person. [Laughs] But we were all on set, the first thing we did is everyone started walking over to one another’s suit to ooh and ahhh.

TVLINE | Grant Gustin probably has it best right now, basically in comfy high-tech pajamas.
Oh, totally! But it’s interesting — it’s a cool suit, but he’ll be like, “Yeah, but this part rubs a little bit….” Everybody has something like, “Yeah, this doesn’t quite work” or “This is a little uncomfortable.” For Elongated Man (The Flash‘s Hartley Sawyer), once his mask is on it has to stay on all day, because it’s glued. So when he saw me peel off mine, he was like, “How did you do that?!” I’m like, “There are magnets attached to my face, and there are magnets in the mask….” He’s like, “They told me [glue] is the only way it could happen!” Yeah, well, they lied to you. Because this is the way I do it!

TVLINE | Give me one last tease about your Arrowverse debut.
I definitely have a role to play — how about that?

Want scoop on the Arrowverse? Email InsideLine@tvline.com and your question may be answered via Matt’s Inside Line.