The Marvelous Mrs. Maisel served her country with distinction in the Season 3 premiere, kicking off her first big tour with a rowdy USO show — while her father Abe fought a war on the homefront.

We pick up where we left off, with Midge in bed with her ex Joel: After their night together, she kisses him tenderly on the cheek and sneaks out before he can wake up. Next thing we know, she and Susie are driving up to an Army base filled with soldiers while a line of showgirls in feathered headdresses tap-dance on stage. Midge is opening for musician Shy Baldwin, and Susie warns her to keep her act clean: “Don’t say f—k,” and no dick jokes… even though Midge has plenty of those, apparently. She’ll have plenty of cash soon, too: Susie’s preparing to ask for $4,500 for the six-month tour. (Which was a lot of money back then!) 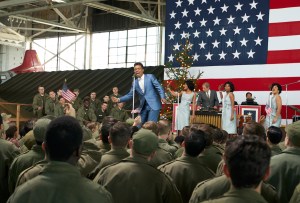 Midge takes the stage, dressed in a patriotic red, white and blue, and dishes out a series of military-themed gags that have the soldiers in stitches. (Let’s be honest: They also hoot and holler when she does a twirl for them.) She gets so caught up in the moment, she almost forgets to introduce Shy and his band — which is the whole reason she’s there, after all. Shy takes over and sings one of his hits titled “One Last Angel in Heaven” (a pretty catchy tune, actually), and afterwards, Midge apologizes profusely for not introducing him. Susie doesn’t make things any better: After giving Shy a confused look, she tells him, “You sound fat on your albums.”

Midge calls Joel to check in, and it’s a bit awkward: She wonders why he didn’t call after their night together, and he notes she didn’t call, either. They end up bickering, with Joel reminding her that “you made it very, very clear: one night only.” Besides, he’s busy with a new business venture, signing a lease for a cheap storage space in Chinatown with dreams of turning it into a nightclub. It seems too good to be true… and it is. While he’s proudly showing it off, Joel discovers a secret room in the back where dozens of Chinese people are gambling. An English-speaking Chinese woman assures him it’s just “a family gathering,” before concluding: “Leave us alone, and we’ll leave you alone.” Simple enough!

Once the USO show wraps up, Midge gets roped into taking a few photos and agreeing to attend a canteen dance on the base that night. (You know, for the boys.) While Susie takes a call from a furious Sophie Lennon, who lowered herself to travel “below 14th Street” just to ask Susie to be her manager, Midge heads home to change and finds her parents in the middle of a huge fight. Since Abe quit his job at Columbia, they’re forced to move out of their apartment, which the school paid for. Abe doesn’t mind downsizing — “Who needs all these rooms?” — but he also unloads on his daughter, calling her a quitter for ditching Benjamin. Midge fires back that for all of Abe’s big talk about free speech, her pal Lenny Bruce is actually out there fighting for freedom of expression. 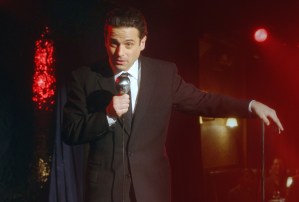 Abe has to see this for himself, so he shows up at a Lenny Bruce show just in time to see the cops haul Lenny away for violating obscenity laws. Abe stands up and protests, insisting that Lenny didn’t do anything wrong, and ends up getting thrown behind bars right along with him. (Rose is nice enough to bail them both out.) At the canteen dance, Midge learns she was only invited because she’s a cute girl and the boys need someone to dance with — and also learns that Susie will be representing her arch nemesis Sophie Lennon. “That psychotic giraffe of a woman has been trying to destroy me for a year,” she reminds Susie, who insists that Midge is “still everything to me,” but she can’t turn down a huge business opportunity like this. A still-fuming Midge gets pulled away in a conga line… and Season 3 is officially off and running.

Grade Mrs. Maisel‘s return in our poll below, and hit the comments to share your post-premiere thoughts.