The Mandalorian this Friday parked his ship on a very familiar planet, where he grappled with a face that is very familiar to Agents of S.H.I.E.L.D. fans.

After being dogged in space by a fellow bounty hunter who tried to co-opt his “warm/cold” catchphrase, Mando got clearance to land the damaged Razor Crest in the space port of… Mos Eisley, on the planet Tatooine — though not in Docking Bay 94 (which I like to think has been memorialized by now and turned into a nice museum). The hangar’s owner/mechanic, Peli Motto (played by Amy Sedaris), assesses the ship’s damage (leaky fuel line included) and promises not to let droids tend to the Mandalorian’s ride, though that will cost him more. Before heading out into town, Mando stows the Child away in a secret-ish room, though as we could predict, that will be for naught!

Next stop? The Mos Eisley cantina, though the band appears to be on break. When Mando asks around about any work, the droid-tender shrugs him off, but a nearby patron, Toro Calican (Jake “son of Bobby” Cannavale), presents a prospect — an assassin named Fennec Shand (S.H.I.E.L.D.’s Ming-Na Wen) is hiding out beyond the Dune Sea. Mando is quick to dismiss the gig, saying that to chase such an elite mercenary (whose crime boss employers have included Hutts) would be a suicide mission. Toro, though, is desperate to fulfill his first job and thus earn his guild card — and is willing to even let Mando keep the payday in return. That’s a deal even Mando can’t pass up. 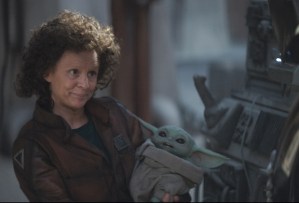 Mando heads back to Hangar 35, where he learns that the Child revealed himself to Peli Motto, who has pretty happily been playing babysitter as well as mechanic. She agrees to mind the kid while Mando and Toro head out on speeder bikes to track their quarry. After bartering their way past some Tusken Raiders, they get a bead on Fennec’s likely location, but soon find themselves under sniper fire from the assassin. Mando decides they will lay low until nightfall, after which they approach via speeder bikes. And when Fennec gets them in her crosshairs, they launch flares that temporarily blind her night vision. Mando nonetheless is seemingly shot down off his bike, and then shot again with a blast to the chest. Toro meanwhile sneaks up on Fennec and they slug it out, but Mando arrives on the scene in time to settle the fight. 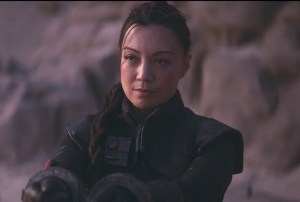 Mando reluctantly leaves Toro with a cuffed Fennec while he doubles back to fetch a Dewback for transport. Fennec pulls a mind game on Toro, saying that the Mandalorian would be a far shinier bounty for him to deliver to the guild, given what happened back on Novarro (sp?), the planet from which Mando first fled with the Child. Toro takes the bait, but shoots Fennec in cold blood rather than let her possibly double-cross and kill him. Mando later returns with the Dewback to find Toro gone, but runs into him back at the hangar, where the wannabe hunter is holding the Child hostage. When Peli Motto is tasked to cuff the Mandalorian, it appears that she slips him/or he has something (dark scene!) which he uses to cause a flash-y diversion, during which he guns down Toro. The Child, thankfully, emerges from the minor melee unscathed.

Mando steals whatever cash Toro had on him and gives it to an appreciative Peli Motto, then flies off with the Child to wherever the next day takes them. Meanwhile, we see a figure in boots and a Mandalorian-style duster approach Fennec’s seemingly lifeless body, back in the dunes….

What did you think of the 29-minute Episode 5, “The Gunslinger”?